Sirenia is the order of placental mammals which comprises modern "sea cows" (manatees and the Dugong) and their extinct relatives. They are the only extant herbivorous marine mammals and the only group of herbivorous mammals to have become completely aquatic. Sirenians are thought to have a 50-million-year-old fossil record (early Eocene-recent). They attained modest diversity during the Oligocene and Miocene, but have since declined as a result of climatic cooling, oceanographic changes, and human interference. Two genera and four species are extant: Trichechus, which includes the three species of manatee that live along the Atlantic coasts and in rivers and coastlines of the Americas and western Africa, and Dugong, which is found in the Indian and Pacific oceans Read more ...


Prehistoric Pygmy Sea Cow Discovered in Madagascar   National Geographic - December 12, 2009
A new species of extinct pygmy sea cow is one of the first fossil mammal species found in Madagascar from the mysterious time period between 80 million years ago and 90,000 years ago, experts say. "There's a big gap where we really don't know anything about what's going on in the fossil record," said study leader Karen Samonds, of McGill University in Montreal, Canada. Sea cows, or sirenians, today include manatees and dugongs. Known from a roughly 40-million-year-old skull and a few ribs, the new species has been named Eotheroides lambondrano, after the Malagasy word for dugong, which translates to "water bushpig." At about seven feet (two meters) long, the ancient pygmy sea cow was smaller than the modern dugong, which ranges from about 8 to 10 feet (2.4 to 3 meters) in length. The pygmy sea cow would have been "a neat in-between" animal in the evolution from primitive land-dwelling mammals to today's aquatic sea cows, Samonds said. (Explore a prehistoric time line.) E. lambondrano is also unique in that its closest relatives would have lived in what is now India and Egypt, according to the study - making its Madagascan location all the more special.


Fossil gives window on the past - Dugong - Sea Cow 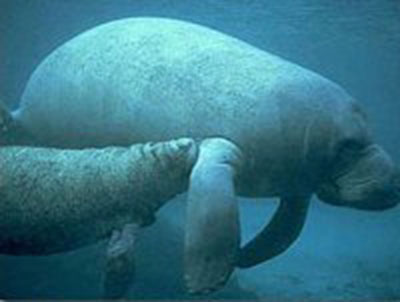 A 6000-year-old dugong fossil discovered in Sydney suggests the climate was once warmer, more like sub-tropical Queensland, Australian geologists say. A team of paleoclimatologists led by Dr Robert Haworth from the University of New England in Armidale report its findings in the current issue of the journal Australian Geographical Studies. Today, dugongs or sea cow are endangered herbivorous marine mammals. They live in shallow tropical and subtropical coastal and island bays from East Africa to Vanuatu. Haworth told ABC Science Online that in Australia, they are now only found as far south as southern Queensland, in Brisbane's Moreton Bay. So his interest was pricked by reports of an 1896 discovery of dugong bones, unearthed in a Sydney canal construction site along with shell-rich sediments and Aboriginal artifacts.

The 19th century University of Sydney geology professor Edgeworth David who analyzed the bones at the time, said that they were evidence of an earlier climatic period when conditions in Sydney were more like that much further north. The bones were put in the Australian Museum in Sydney, where they lay for 110 years until Haworth's team decided to analyze a rib bone to settle the dugong's age and work out what it could tell us about past climate of the area. Using carbon-14 dating, they calculated the fossil dugong was about 6000 years old. Given where the species is found today, Haworth suggested the climate then was "likely" to be warmer than today, more like southern Queensland.

But other paleoclimatologists said there could be other explanations for the find. Dr Will Howard, of the University of Tasmania in Hobart, said the water may have been warmer because there was a stronger East Australian Current at the time, or it was an unusually warm year. He said the dugong may have been a stray that managed to work its way down the coast. "It's possible," said Haworth. "The dugong by itself would not have proved it, but it's the dugong in conjunction with other work." He said other research in the same waters had shown sedentary marine organisms like coral, which are today only found much further north, dating to about the same time.

Research led by Dr Peter De Deckker from the Australian National University in Canberra, also supported Haworth's findings. De Deckker's team had analysed sediment cores taken from the deep oceans from northern, western and southern Australia for clues on past climates. According to Howard, there is a debate over whether temperatures were higher than now during the mid-holocene, a period from about 7000 to 5000 years ago that marks the middle of the current interglacial period.

Haworth said the dugong had been found in marine sediments one kilometre inland from the nearest deep water, suggesting the sea level was higher at the time. He said there was a line of shells more than a kilometre long, running along the whole length of the canal, that could only have arrived by wave action. The very obvious conclusion for the evidence was that at this period, 6000 years ago, Botany Bay extended right up almost to the gates of Centennial Park about 10 kilometres away. He said it was possible that Aboriginal people had brought the dugong inland, but unlikely as they are large animals. The dugong was found in alternating layers of marine and terrestrial sediments, suggesting a more complicated climatic record than previously accepted. He said the layers suggested there had been climate-driven fluctuations in sea level over relatively short periods of time over the past 6000 years, and if this was correct, it had implications for coastal development nowadays.