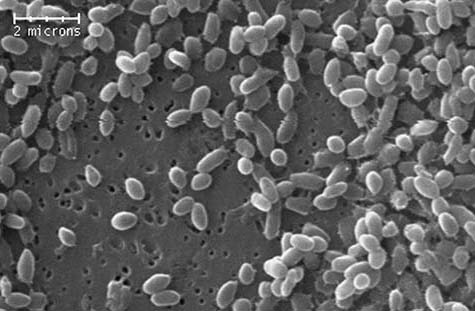 The ancestors of modern bacteria were unicellular microorganisms that were the first forms of life to appear on Earth, about 4 billion years ago. For about 3 billion years, all organisms were microscopic, and bacteria and archaea were the dominant forms of life.Although bacterial fossils exist, such as stromatolites, their lack of distinctive morphology prevents them from being used to examine the history of bacterial evolution, or to date the time of origin of a particular bacterial species. However, gene sequences can be used to reconstruct the bacterial phylogeny, and these studies indicate that bacteria diverged first from the archaeal/eukaryotic lineage. Read more ...


Evidence of 3.5-billion-year-old bacterial ecosystems found in Australia   Science Daily - November 12, 2013
Reconstructing the rise of life during the period of Earth's history when it first evolved is challenging. Earth's oldest sedimentary rocks are not only rare, but also almost always altered by hydrothermal and tectonic activity. A new study has revealed the well-preserved remnants of a complex ecosystem in a nearly 3.5 billion-year-old sedimentary rock sequence in Australia. The Pilbara district of Western Australia constitutes one of the famous geological regions that allow insight into the early evolution of life. Mound-like deposits created by ancient photosynthetic bacteria, called stromatolites, and microfossils of bacteria have been described by scientists in detail. However, a phenomenon called microbially induced sedimentary structures, or MISS, had not previously been seen in this region. These structures are formed from mats of microbial material, much like mats seen today on stagnant waters or in coastal flats.


Ancient Creature Fossilized By The Bacteria That Ate It   Science Daily - November 2004
High in the mountains of Antarctica, geologists unearthed the fossil remains of a 180-million-year-old clam-like creature that was preserved in a very unusual way: by the ancient bacteria that devoured it. And only yards away, they found the first fossil evidence of a completely different kind of bacteria that scientists were unsure even existed as fossils that long ago. The first find answers one of the most fundamental questions in paleontology -- why some creatures fossilize even though they lack the mineral-rich bones, teeth, or shells that are normally required for the process. The second find corroborates other evidence that a particular type of bacteria has a very ancient history on Earth. The scientists suspect that the bacteria feasted on the dead arthropods, then absorbed minerals from their surroundings and turned to quartz, preserving perfectly the shape and texture of the arthropods.


Cyanobacteria - they changed the face of the Earth --   AP - August 5, 1999
Study provides evidence of early oxygen-producing organisms The earliest direct evidence of organisms releasing oxygen into Earth's atmosphere has been found in the ancient remains of bacterial slime from Australia. The 2 1/2 billion-year-old molecular fossils show that early forms of life began paving the evolutionary path for oxygen-breathing animals at least 700 million years earlier than previously known. Rod-shaped cyanobacteria found in Australia

Scientists had long suspected that organisms called cyanobacteria first started converting sunlight and carbon dioxide into food energy and oxygen billions of years ago. But no evidence had been previously found in fossils. Summons and his colleagues tested samples from a drill core in Western Australia's Hammersley Basin, one of the most geologically stable areas on Earth, and later, samples from Mexico, Germany and Israel. They discovered a durable molecular signature - "fingerprints" - unique to certain cyanobacteria that lived on the shores of the ancient oceans, long before plants, animals and other complex life emerged The technique of identifying the molecular signature of ancient organisms also could be used in the hunt for life elsewhere in the universe.

The markers discovered by Summons' team survived 2 1/2 billion years on Earth. Mars, a quieter place geologically, could preserve the record even longer, McKay said. Forms of cyanobacteria exist today, often referred to as blue-green algae because they resemble the slimy substance. They can be found in places like the hot springs of Yellowstone National Park. The microbes may have been pumping oxygen into the atmosphere for as long as 3 1/2 billion years - 1 billion years after the Earth formed. "The further you go back, there are fewer and fewer well-preserved samples," said Linda Jahnke, a study co-author and bacteriologist at NASA's Ames Research Center in Moffett Field. "It's a fact of the reworking of the surface of the Earth. Things are being buried all the time." 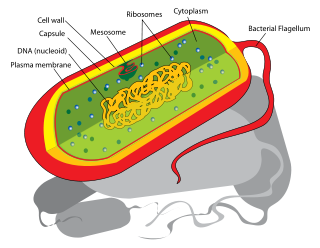