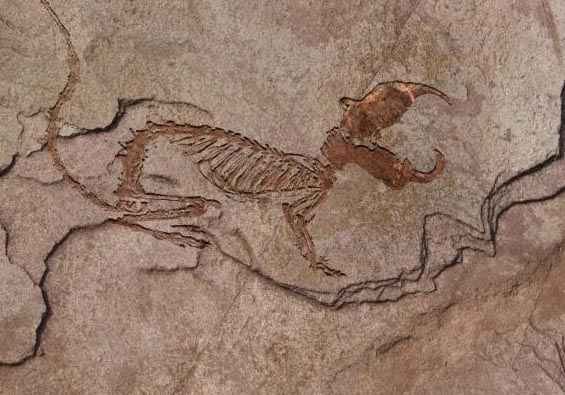 The history of the colonization of the world's continents by rodents is complex. The movements of the large superfamily Muroidea (including hamsters, gerbils, true mice and rats) may have involved up to seven colonizations of Africa, five of North America, four of Southeast Asia, two of South America and up to ten of Eurasia. During the Eocene, rodents began to diversify. Beavers appeared in North America in the late Eocene before spreading to Eurasia. Late in the Eocene, hystricognaths (caviomorphs) colonized Africa, most probably having originated in Asia at least 39.5 million years ago. Read more ...

Biggest rodent 'fought with teeth' like tusks   BBC - February 3, 2015
Scientists say the largest ever rodent probably used its huge front teeth like tusks, defending itself and digging with them instead of just biting food. The bull-sized cousin to the guinea pig died out around two million years ago. Based on a CT scan of its skull and subsequent computer simulations, its bite was as strong as a tiger - but its front teeth were built to withstand forces nearly three times larger. This suggests that its 30cm incisors were much more than eating implements.


Oldest fossil rodents in South America confirms animals from Africa   PhysOrg - October 12, 2011
In a literal walk through time along the Ucayali River near Contamana, Peru, a team of researchers found rodent fossils at least 41 million years old Đ by far the oldest on the South American continent. The remains Đ teeth Đ showed these mouse- and rat-size animals are most closely related to African rodents, confirming the hypothesis that early rodents of South America had origins in Africa, said Darin Croft, an anatomy professor at the Case Western Reserve University School of Medicine and member of the research team. This discovery supports the contention that rodents landed in the north and spread south. The rodents are from the suborder Caviomorpha, the group that includes living rodents such as guinea pigs, chinchillas, and New World porcupines. The oldest fossils from this group are only about 32 million years old in central Chile and about 30 million years old in Patagonia, Argentina,. Taken all together, the pattern contradicts the theory of a northward expansion deduced from the fossil record 20 years ago.


Fossil Tooth Remains Of Extinct Rodent Species Discovered: Oldest Find Within This Genus   Science Daily - August 7, 2009
Scientists have discovered an extinct rodent species, based on fossil tooth remains found in Alborache, Valencia. Eomyops noeliae, from the Eomyidae family, represents the oldest find within this genus in the world. The small number of fossils found has prevented the scientists from the University of Valencia (UV), who have led this research study, from being able to gain a full picture of this "new" rodent. However, they have been able to prove - on the basis of just the teeth, the only fossil remains discovered - that Eomyops noeliae was morphologically and biometrically different from other rodents of the Eomyops genus. The new species provides valuable evolutionary, biostratigraphic and paleoenvironmental information related to this rodent, which was of average size within the group.


Uruguay: Bull-Size Rodent Discovered -- Biggest Yet National Geographic - January 16, 2008
An artist's reconstruction of Josephoartigasia monesi (top) is superimposed on an image of the prehistoric rodent's skull. A sculpture (below) further fleshes out the South American mammal.


Laos: 'Fossil' rock rat pictured alive BBC - June 15, 2006
Images have been obtained of a live Laotian rock rat, the animal science now believes to be the sole survivor of an ancient group of rodents. The kha-nyou, as it is known locally, was trapped by an expedition in May. The pictures show a friendly, furry creature about the size of a squirrel that waddles a bit like a duck. Experts say the kha-nyou can trace its line to a rodent family that initial studies had suggested became extinct more than 11 million years ago. The expedition to central Laos was led by a retired Florida State University scientist, David Redfield."We were extremely fortunate in so many ways to be able to do this," he said of the discovery. The kha-nyou was picked up near the village of Doy, close to the Thai border. It was released back into the wild after being photographed and videoed.


New rodent is 'living fossil' BBC - March 9, 2006
A squirrel-like rodent discovered in Laos is the sole survivor of a group that otherwise died out 11 million years ago, according to fossil data. The animal made headlines in 2005 when it was hailed as the only new family of living mammals to be found in 30 years. But scientists now believe it is a "living fossil", the relic of a group of prehistoric rodents once widespread in South East Asia and Japan.