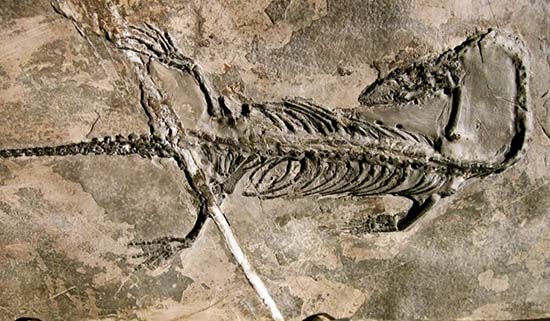 The origin of the reptiles lies about 310-320 million years ago, in the steaming swamps of the late Carboniferous period, when the first reptiles evolved from advanced reptiliomorph labyrinthodonts.

The oldest known animal that may have been an amniote, i.e. a primitive reptile rather than an advanced amphibian, is Casineria (though it may have been a temnospondyl amphibian). A series of footprints from the fossil strata of Nova Scotia dated to 315 Ma show typical reptilian toes and imprints of scales.

The tracks are attributed to Hylonomus, the oldest unquestionable reptile known. It was a small, lizard-like animal, about 20 to 30 centimetres (7.9 to 11.8 in) long, with numerous sharp teeth indicating an insectivorous diet. Other examples include Westlothiana (for the moment considered a reptiliomorph amphibian rather than a true amniote) and Paleothyris, both of similar build and presumably similar habit. Read more ...

Meet Granddad: Weird, Ancient Reptile Gave Rise to Mammals   Live Science - October 5, 2016
Two weird, mammal-like reptiles that sort of looked like scaly rats, each smaller than a loaf of bread, roamed ancient Brazil about 235 million years ago, likely dining on insects the predators snagged with their pointy teeth, a new study finds. The analysis of two newfound species of cynodont, a group that gave rise to all living mammals, sheds light on how mammals developed from these late Triassic creatures, the researchers said.


Discovery of new fossil species reveals unique binocular vision of the first ancient marine reptile   PhysOrg - December 9, 2015
An international research partnership is revealing the first mosasaur fossil of its kind to be discovered in Japan. Not only does the 72-million-year-old marine reptile fossil fill a biogeographical gap between the Middle East and the eastern Pacific, but also it holds new revelations because of its superior preservation.


Pre-reptile may be earliest known to walk upright on all fours   Science Daily - September 17, 2015
Wandering an arid region of the ancient supercontinent of Pangea about 260-million years ago, the pre-reptile Bunostegos akokanensis is the oldest known creature to have walked upright on all fours, according to a newly published study.


Fossil Discovery Could Be Missing Link In Mystery Of Turtle Shell Evolution   Huffington Post - June 26, 2015
An ancient reptile that doesn't have a shell is an important link in the evolutionary history of the turtle, according to new research. The fossilized remains of the newly described creature, named Pappochelys rosinae, were found in the south German state of Baden-Wźrttemberg and are believed to be about 240 million years old. The reptile had a small skull with a short, pointed snout and was about eight inches in length at full size, with a long tail.


Forgotten fossil found to be new species of ichthyosaur   BBC - February 19, 2015
A fossil stored in a Doncaster museum for 30 years and thought to be a plaster copy has turned out to be a new species of ancient reptile.


Ancient Knife-Toothed Reptile Is Crocodile Cousin   Live Science - January 22, 2015
The fossil of a prehistoric 9-foot-long (2.7 meters) carnivorous reptile that had sharp, serrated teeth is helping researchers fill out the early branches of the reptile family tree, according to a new study. It's unclear where the reptile, Nundasuchus songeaensis, falls on the evolutionary tree. But the new findings show that Ňit is either the closest relative of the common ancestor of birds and crocodylians, or it is more closely related to crocodylians than to birds, most appropriately called a crocodylian cousin.

Primordial Reptile Fossils Show Mother Caring for Babies   Live Science - January 18, 2015
The fossilized remains of a small aquatic reptile surrounded by six babies suggest that the extinct animal was caring for the little ones when they died, a new study finds. The reptile is an extinct species called the philydrosaurus, and likely lived during the Early Cretaceous, a time period that spans about 145 to about 100 million years ago. An anonymous farmer donated the "beautifully preserved skeletons" to the Jinzhou Museum of Paleontology in northeastern China in 2010, the scientists added. The adult in the group is roughly four times the size of the smaller ones, which appear to be juveniles of the same species. All of the young are similar in size, so it's likely that they were born in a clutch at the same time, the researchers said. 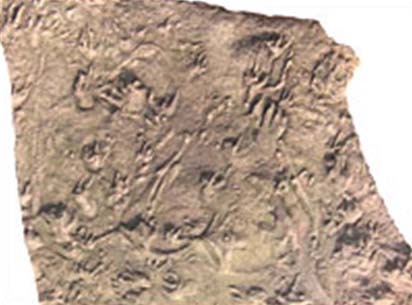 The earliest evidence for the existence of reptiles has been found in Canada. The 315 million-year-old fossilized tracks give an insight into a key milestone in the history of life, when animals left water to live on dry land. The footprints suggest reptiles evolved between one and three million years earlier than previously thought.