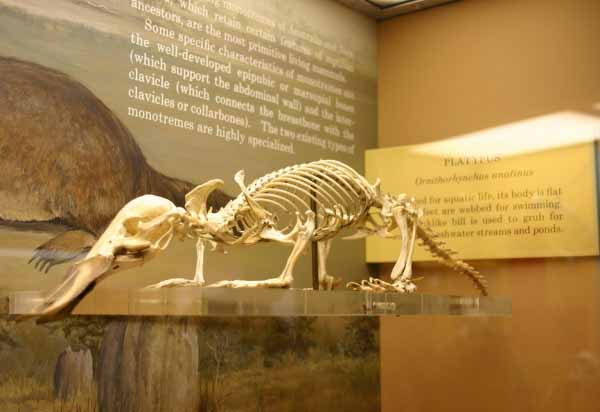 The oldest discovered fossil of the modern platypus dates back to about 100,000 years ago, during the Quaternary period. The extinct monotremes Teinolophos and Steropodon were closely related to the modern platypus. The fossilized Steropodon was discovered in New South Wales and is composed of an opalized lower jawbone with three molar teeth (whereas the adult contemporary platypus is toothless). The molar teeth were initially thought to be tribosphenic, which would have supported a variation of Gregory's theory, but later research has suggested, while they have three cusps, they evolved under a separate process.

The fossil is thought to be about 110 million years old, which means the platypus-like animal was alive during the Cretaceous period, making it the oldest mammal fossil found in Australia. Monotrematum sudamericanum, another fossil relative of the platypus, has been found in Argentina, indicating monotremes were present in the supercontinent of Gondwana when the continents of South America and Australia were joined via Antarctica (up to about 167 million years ago). A fossilized tooth of a giant platypus species, Obdurodon tharalkooschild, was dated 5-15 million years ago. Judging by the tooth, the animal measured 1.3 meters long, making it the largest platypus on record.


Platypus Much Older Than Thought, Lived with Dinos

Australia's duck-billed platypus has been around much longer than previously thought, according to a new fossil study that found the egg-laying mammal's origin traces back to the dinosaur days. Platypuses and their closest evolutionary relatives, the four echidna species, were thought to have split from a common ancestor sometime in the past 17 million to 65 million years.

But remains of what was believed to be a distant forebear of both the platypus and the echidna - the fossil species Teinolophos - actually belong to an early platypus, according to scientists who performed an x-ray analysis of a Teinolophos jawbone. The finding means the two animals must have separated sometime earlier than the age of the fossil - at least 112 million years ago.

The international team, led by Timothy Rowe, of the University of Texas in Austin, used a specially modified CT scanner to capture high-resolution images of the internal structure of a 112.5- to 122-million-year-old Teinolophos jawbone found in southeastern Australia.

The scientists found that the Teinolophos had already developed features thought to be unique to modern platypuses, including an electro-sensitive "bill" for finding aquatic prey. "This pushes the platypus back across the K-T boundary," Rowe said, referring to the mass extinction event that wiped out the dinosaurs about 65 million years ago. "Now it looks like [platypuses] crossed the boundary without any problem."

Platypus bills are complex sensory organs loaded with electrical receptors. In murky waters the animals hunt by tracking the weak electrical fields generated by muscle activity in fish and other prey.

Teinolophos had an electro-sensitive bill, the scientists concluded after imaging revealed a broad canal running through the bone of the lower jaw.

All mammals have some type of canal that conducts nerve fibers to the teeth, Rowe noted. But in the platypus, this canal is greatly enlarged to accommodate a massive network of fibers that carry sensory information from the bill. The claim that Teinolophos is a very ancient platypus rests largely on this feature. "Nothing but the platypus has this huge canal," Rowe said.

But Matt Phillips, of the Australian National University in Canberra, said more evidence may be needed. The research "does not confirm that the platypuses and echidnas diverged more than 112 million years ago," Phillips said. Phillips offered an alternative explanation for the new findingsŃthat an early platypus-echidna ancestor had wide jaw canals, and this feature was retained by platypuses but reduced during subsequent echidna evolution. In such a scenario, the split of the two species could still have been relatively recent, Phillips said. Lead author Rowe counters that evidence for a more recent divergence is weak. He says it makes more sense to assume the wide canals are a unique feature of the platypus lineage.

Because platypus and echidna fossils are rare, Rowe noted, most previous estimates of the strange animals' antiquity were based on molecular rather than fossil evidence. The gradual accumulation of changes in the DNA of closely related species provides a kind of "molecular clock" that biologists can use to estimate when the species branched apart from one another. DNA changes, however, don't occur at the same rate in different kinds of animals. The clock must be calibrated using other evidence, such as fossils.

Studies suggesting a more recent platypus origin have used a molecular clock calibrated with fossil information from marsupials and other mammals, not platypuses and echidnas, Rowe said. The newfound early days of the platypus suggest that molecular evolution in platypuses and echidnas has proceeded at a far slower pace than in other mammal groups, the researchers say. "None [of the molecular studies] predicted we'd find a platypus this old," Rowe said. "The picture now emerging is that the monotremes are 'slow' in many respects," he continued. Platypuses and echidnas are the only extant "monotremes," or mammals that lay eggs. "Their metabolic and respiration rates are slower, their body temperature is lower, and it's possible that the monotreme lineage evolved at really slow rates," he said.