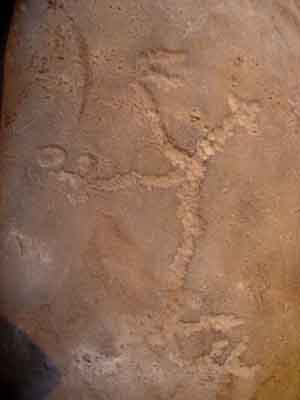 A stick figure man with a giant phallus dubbed "the little horny man" by its discoverers is the oldest rock carving found yet in the Americas, researchers say. These findings might shed new light on when the New World was first settled, scientists added. The time frame during which humans first reached the Americas remains hotly debated. One key to settling this controversy would involve uncovering early examples of human artifacts, such as art. Scientists discovered one ancient sample of such art in a cave named Lapa do Santo in central-eastern Brazil. The region is home to Luzia, the oldest human skeleton found to date in South America. 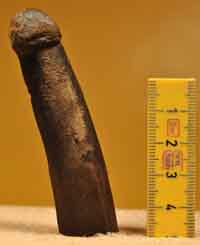 Sex toys have come a long way since the Stone Age Đ but then again, perhaps not as much as we might think. Last week, an excavation in Sweden turned up an object that bears the unmistakable look of a penis carved out of antler bone. Though scientists can't be sure exactly what this tool was used for, it's hard not to leap to conclusions. The carved bone was unearthed at a Mesolithic site in Motala, Sweden, that is rich with ancient artifacts from between 4,000 to 6,000 B.C. The area's unique features may have allowed bone artifacts, which usually get destroyed over the millennia, to survive. It's not the first time that such a phallic object has been found from the ancient world. Another item strongly resembling a penis was unearthed in Germany in 2005. That one is even older Đ dating from 28,000 years ago Đ and made of stone.


28,000 year old phallus unearthed in German cave BBC - July 25, 2005
A sculpted and polished phallus found in a German cave is among the earliest representations of male sexuality ever uncovered, researchers say. The 20cm-long, 3cm-wide stone object, which is dated to be about 28,000 years old, was buried in the famous Hohle Fels Cave near Ulm in the Swabian Jura. The prehistoric "tool" was reassembled from 14 fragments of siltstone. It's life size suggests it may well have been used as a sex aid by its Ice Age makers, scientists report. Researchers believe the object's distinctive form and etched rings around one end mean there can be little doubt as to its symbolic nature. "It's highly polished; it's clearly recognizable," said Professor Conard. The Tubingen team working Hohle Fels already had 13 fractured parts of the phallus in storage, but it was only with the discovery of a 14th fragment last year that the team was able finally to put the "jigsaw" together. The different stone sections were all recovered from a well-dated ash layer in the cave complex associated with the activities of modern humans (not their pre-historic "cousins", the Neanderthals).


Ancient fossil penis discovered BBC - December 5, 2003
Scientists have identified the oldest male fossil animal yet discovered. It is an ocean-dwelling creature from 425-million-year-old rocks in the UK. Unusually, its soft parts are well preserved as well as its hard shell. It has limbs for swimming and feeding. It also has what scientists say is the oldest penis seen in the fossil record. Researchers are puzzled as to why the ancient creature appears so similar to its modern relatives.