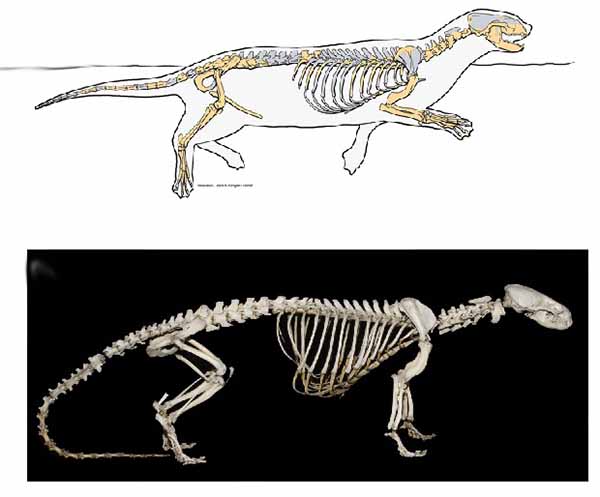 An otter is an aquatic or marine carnivorous mammal. Otters are carnivorous mammals in the subfamily Lutrinae. The 13 extant otter species are all semiaquatic, aquatic or marine, with diets based on fish and invertebrates. Lutrinae is a branch of the weasel family Mustelidae, which also includes badgers, honey badgers, martens, minks, polecats, weasels, and wolverines. Read more

A giant, prehistoric otter's surprisingly powerful bite   Live Science - November 9, 2017
A massive, wolf-sized otter that lived about 6 million years ago may have been a dominant predator in its time, according to a new analysis of the animal's jaws. When scientists used computers to simulate how biting would strain S. melilutra's jaws, they concluded that the animal had much firmer jaw bones than expected, giving it a surprisingly strong bite.


New ancient otter species among largest ever found   PhysOrg - January 23, 2017
The new species, Siamogale melilutra lived 6.24 million years ago in in the Yunnan Province in China. It weighed approximately 110 lbs and was roughly the size of a modern wolf. Siamogale melilutra belongs to an ancient lineage of extinct otters that was previously known only from isolated teeth from a different, much older species that was recovered in Thailand. What is unique about the new discovery is that researchers recovered a complete cranium, mandible, dentition and various skeletal elements - offering a wealth of insight into the taxonomy, evolutionary history and functional morphology of this new species.