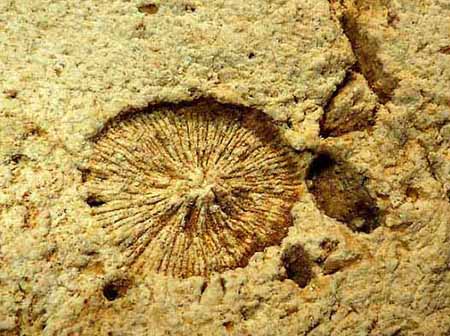 The earliest fossils possessing features typical of fungi date to the Proterozoic eon, some 1,430 million years ago (Ma); these multicellular benthic organisms had filamentous structures with septa, and were capable of anastomosis. More recent studies (2009) estimate the arrival of fungal organisms at about 760-1060 Ma on the basis of comparisons of the rate of evolution in closely related groups. For much of the Paleozoic Era (542-251 Ma), the fungi appear to have been aquatic and consisted of organisms similar to the extant chytrids in having flagellum-bearing spores.The evolutionary adaptation from an aquatic to a terrestrial lifestyle necessitated a diversification of ecological strategies for obtaining nutrients, including parasitism, saprobism, and the development of mutualistic relationships such as mycorrhiza and lichenization. Recent (2009) studies suggest that the ancestral ecological state of the Ascomycota was saprobism, and that independent lichenization events have occurred multiple times.

It is presumed that the fungi colonized the land during the Cambrian (542-488.3 Ma), long before land plants. Fossilized hyphae and spores recovered from the Ordovician of Wisconsin (460 Ma) resemble modern-day Glomerales, and existed at a time when the land flora likely consisted of only non-vascular bryophyte-like plants. Prototaxites, which was probably a fungus or lichen, would have been the tallest organism of the late Silurian. Fungal fossils do not become common and uncontroversial until the early Devonian (416Đ359.2 Ma), when they occur abundantly in the Rhynie chert, mostly as Zygomycota and Chytridiomycota. At about this same time, approximately 400 Ma, the Ascomycota and Basidiomycota diverged and all modern classes of fungi were present by the Late Carboniferous (Pennsylvanian, 318.1Đ299 Ma).

Lichen-like fossils have been found in the Doushantuo Formation in southern China dating back to 635-551 Ma. Lichens formed a component of the early terrestrial ecosystems, and the estimated age of the oldest terrestrial lichen fossil is 400 Ma; this date corresponds to the age of the oldest known sporocarp fossil, a Paleopyrenomycites species found in the Rhynie Chert.

The oldest fossil with microscopic features resembling modern-day basidiomycetes is Palaeoancistrus, found permineralized with a fern from the Pennsylvanian. Rare in the fossil record are the Homobasidiomycetes (a taxon roughly equivalent to the mushroom-producing species of the Agaricomycetes). Two amber-preserved specimens provide evidence that the earliest known mushroom-forming fungi (the extinct species Archaeomarasmius leggetti) appeared during the mid-Cretaceous, 90 Ma.

Some time after the PermianĐTriassic extinction event (251.4 Ma), a fungal spike (originally thought to be an extraordinary abundance of fungal spores in sediments) formed, suggesting that fungi were the dominant life form at this time, representing nearly 100% of the available fossil record for this period. However, the relative proportion of fungal spores relative to spores formed by algal species is difficult to assess, the spike did not appear worldwide, and in many places it did not fall on the PermianĐTriassic boundary. Read more ...


Towering Mystery Fossil Was a 'Shroom With a View

At a time when the tallest trees stood just a few feet high, giant "mushrooms" towered over the landscape. That's the finding being reported by new a paper appearing in the May issue of the journal Geology. The study adds to the quest to solve a long-standing scientific puzzle: the true nature of a fossil that was the world's largest organism from about 420 million to 370 million years ago.

Called Prototaxites, the mystery life-form was first reported in 1859 based on samples found in Canada. The ancient organism boasted trunks up to 24 feet (8 meters) high and as wide as three feet (one meter). Prototaxites was widespread - its fossils are found all over the globe. Lead study author Kevin Boyce, of the University of Chicago, said the unidentified monstrosity was a staple in textbooks while he was still in school. "It's fun because it's kind of a classic specimen that people have worried about for a long time," Boyce said. "It's been an outstanding question for 150 years."

Since the fossil's discovery, researchers have speculated that Prototaxites was a type of algae or lichen or even a primitive pine tree. The idea that the fossil could have been a giant fungus first emerged in 1919.

Francis Hueber, a co-author of the new study with the Smithsonian Institution, revived the fungus idea in 2001. Hueber was among the researchers who, as early as the 1970s, were studying chemical signatures called isotopes in the organism. In plants like today's trees and flowers, which get energy from the sun and carbon from the air, two particular carbon isotopes should be in balance.

In plants and animals that eat other life-forms, the isotope ratio should vary widely. That fact turned out to be an important clue: The fossil's combination of isotopes revealed the fungus-like habit of feeding on decaying organic matter. In addition, co-authors at the Carnegie Institution in Washington, D.C., found that Prototaxites fossils contain isotopes from primitive plants of the age as well as certain soil organisms.

Occasional stalks probably sprouted from a vast underground network of hyphae - the fungal equivalent of roots - noted the University of Chicago's Boyce. The fungus probably grew slowly to attain such large sizes, he added. It was likely aided by a relatively slow turnover of plant types. In today's world, ecosystems can change quickly, with grasslands giving way to forests in the space of a few years.

Patricia Gensel is a professor of paleobotany at the University of North Carolina at Chapel Hill who was not involved in the new study. She said the new paper proposes a workable solution to one of science's big hangups about Prototaxites being a fungus: Its reproductive parts seem too big by modern fungus standards. "If the 'logs' of Prototaxites represent a fruiting body [the fungal reproductive organ], it is huge - bigger than any modern individual fruiting body," she said.

The other plants that coexisted with the massive fungus were at most 6.5 feet (2 meters) tall, meaning their remains wouldn't have provided enough nourishment to support fungi with large fruiting bodies. "It is felt by some that they alone do not provide a sufficient source of carbon for it," Gensel said. The study shows that the huge fungus had another source of food: soil microbes called crusts. "Sucking up carbon from microbial crusts would [make large fruiting bodies] possible."