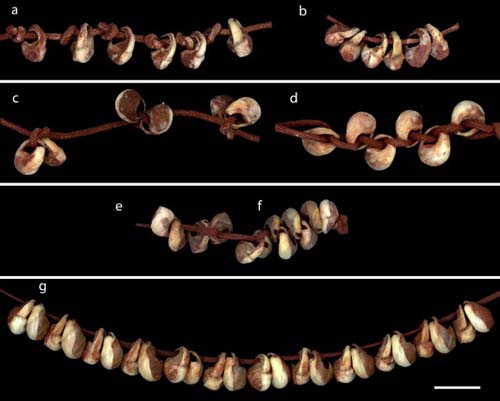 Outside of Africa, the Cro-Magnons had crude necklaces and bracelets of bone, teeth, berries, and stone hung on pieces of string or animal sinew, or pieces of carved bone used to secure clothing together. In some cases, jewelry had shell or mother-of-pearl pieces. In southern Russia, carved bracelets made of mammoth tusk have been found. The Venus of Hohle Fels features a perforation at the top, showing that it was intended to be worn as a pendant.

Around 7,000 years ago, the first sign of copper jewelry was seen. In October 2012 the Museum of Ancient History in Lower Austria revealed that they had found a grave of a female jewelry worker - forcing archaeologists to take a fresh look at prehistoric gender roles after it appeared to be that of a female fine metal worker - a profession that was previously thought to have been carried out exclusively by men. Read more ...

Ice age jewelry in Indonesia reveals how the spiritual life of ancient humans was shaped by their journey to Australia   Daily Mail - April 4, 2017
Researchers in Indonesia have discovered stunning pieces of jewelry and art that date back 30,000 years to the last ice age. Artifacts include beads made from babirusa ('pig deer') tooth, and a pendant made from the bone of a bear that is only found in that area. The findings suggest that the people who lived there at that time adapted their spiritual beliefs based on the animals they met on the journey from Asia to Australia.


Paleolithic jewelry: still eye-catching after 50,000 years   Siberian Times - November 2, 2016
A fascinating collection of jewelry made of ostrich eggshells is being assembled by archeologists working in the world famous Denisova cave in Altai region. Ostriches in Siberia? 50,000 years ago? Yes, it seems so. Or, at least, their eggshells made it here somehow. In a month that has seen disclosures of the fossil of a tropical parrot in Siberia from at least five million years ago in the Miocene era, this elegant Paleolithic chic shows that our deep history (some 2,000 generations ago, give or take) contains many unexpected surprises.


Neanderthals shape up as globe's first jewelers   PhysOrg - March 21, 2015
The widely-held vision of Neanderthals as brutes may need a stark rethink after research found they crafted the world's earliest jewelry from eagle talons 130,000 years ago, long before modern humans appeared in Europe.


Stash of Ancient Jewelry, Full-Figured Statues Discovered   Live Science - November 7, 2012
A hoard of jewelry, figurines and other objects crafted by early farmers in Serbia nearly 8,000 years ago is set to go on public display for the first time at a German museum. Archaeologists dug up the largely undisturbed stash of artifacts during excavations this summer at the site of a Neolithic settlement in Belica, Serbia, about 90 miles (140 kilometers) south of Belgrade. The collection consists of some 80 objects fashioned from clay, bone and stone, including abstract figures, piece of jewelry and miniature axes. The excavations notably uncovered several rotund female figurines carved from serpentinite, a type of rock that was worn smooth by rivers and streams before being picked up by Neolithic artists. Researchers say they are not sure whether these tiny stylized sculptures of full-figured ladies served as idols, lucky charms or fertility symbols.


80,000-year-old Beads Shed Light on Early Culture   Live Science - June 18, 2007
Even the very first modern humans may have spruced themselves up with beaded bling. Twelve shell beads discovered in a cave in eastern Morocco have been dated at more than 80,000 years old, making them one of the earliest examples of human culture. The beads are colored with red ochre and show signs of being strung together. Similar beads have been found in other parts of Africa and the Middle East, suggesting the first Homo sapiens literally carried their penchant for baubles with them as they populated the world.


Study reveals 'oldest jewelry'   BBC - June 22, 2006
The earliest known pieces of jewelry made by modern humans have been identified by scientists. The three shell beads are between 90,000 and 100,000 years old, according to an international research team. Two of the ancient beads come from Skhul Cave on the slopes of Mount Carmel in Israel. The other comes from the site of Oued Djebbana in Algeria. The finds, which pre-date other ancient examples by 25,000 years. The pea-sized items all have similar holes which would have allowed them to be strung together into a necklace or bracelet, the researchers believe.


Africa: Cave yields 'earliest jewelry'   BBC - April 15, 2004
The oldest pieces of jewelry made by modern humans have emerged in Africa. Shell beads found in Blombos Cave on the southern tip of the continent are 75,000 years old, scientists say. The pea-sized items all have similar holes which would have allowed them to be strung together into a necklace or bracelet, the researchers believe. The beads carry a symbolic message. Symbolism is the basis for all that comes afterwards including cave art, personal ornaments and other sophisticated behavior.