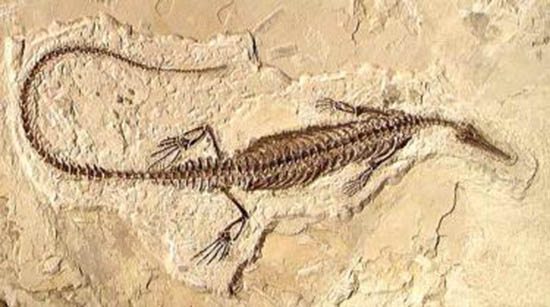 The earliest known fossil remains of a lizard belong to the iguanian species Tikiguania estesi, found in the Tiki Formation of India, which dates to the Carnian stage of the Triassic period, about 220 million years ago. However, doubt has been raised over the age of Tikiguania because it is almost indistinguishable from modern agamid lizards. The Tikiguania remains may instead be late Tertiary or Quaternary in age, having been washed into much older Triassic sediments. Lizards are most closely related to a group called Rhynchocephalia, which includes the tuatara. Rhynchocephalians first appeared in the Late Triassic, so it can be inferred that the lizard-rhynchocephalian divergence occurred at this time and that the earliest lizards appeared in the Triassic. Read more ...

Fossil discovery in storeroom cupboard shifts origin of modern lizard back 35 million years   PhysOrg - December 3, 2022
A specimen retrieved from a cupboard in the Natural History Museum in London has shown that modern lizards originated in the Late Triassic and not the Middle Jurassic as previously thought. This fossilized relative of living lizards such as monitor lizards, gila monsters and slow worms was identified in a stored museum collection from the 1950s, including specimens from a quarry near Tortworth in Gloucestershire, South West England. The technology didn't exist then to expose its contemporary features. As a modern-type lizard, the new fossil impacts all estimates of the origin of lizards and snakes, together called the Squamata, and affects assumptions about their rates of evolution, and even the key trigger for the origin of the group.


Oldest South American fossil lizard discovered in Brazil   PhysOrg - July 29, 2020
Fossil remains of a novel species of lizard that lived more than 130 million years ago have been found in the north of Minas Gerais, Brazil. It has been named Neokotus sanfranciscanus and is the oldest representatives of the order Squamata ever found in South America. Squamates are the largest reptile group, comprising lizards, snakes and amphisbaenians (worm lizards).


Rare lizard fossil preserved in amber   PhysOrg - February 27, 2020
The tiny forefoot of a lizard of the genus Anolis was trapped in amber about 15 to 20 million years ago. Every detail of this rare fossil is visible under the microscope. But the seemingly very good condition is deceptive: The bone is largely decomposed and chemically transformed, very little of the original structure remains


Before There Were Dinosaurs, Triassic 'Lizard King' Ruled Antarctica   Live Science - January 31, 2019
Millions of years before the ground trembled under the footfalls of T. rex - the so-called "king of the dinosaurs" - a forested Antarctica was home to an iguana-size "lizard king." This ancient reptile was an archosaur - part of the same group that would later include dinosaurs, pterosaurs and crocodilians. Scientists recently discovered a partial skeleton of the lizard dating to 250 million years ago, a time when Antarctica was bursting with plant and animal life. Not only does the fossil of this former "king" provide a sharper picture of the forest landscape in long-ago Antarctica, it also helps to explain the evolutionary landscape following the biggest mass extinction in Earth's history, scientists reported in a new study.


World's oldest lizard fossil discovered - 240-million-years-old   Science Daily - May 30, 2018
The fossil, along with data from both living and extinct reptiles -- which involved anatomical data drawn from CT scans and DNA -- suggests the origin of squamates is even older, taking place in the late Permian period, more than 250 million years ago.


Extinct monitor lizard had four eyes, fossil evidence shows   Science Daily - April 2, 2018
Researchers have evidence that an extinct species of monitor lizard had four eyes, a first among known jawed vertebrates. Today, only the jawless lampreys have four eyes. The third and fourth eyes refer to pineal and parapineal organs, eye-like photosensory structures on the top of the head that play key roles in orientation and in circadian and annual cycles. The new findings help to elucidate the evolutionary history of these structures among vertebrates.


48-Million-Year-Old Fossil Shows Insect Inside Lizard Inside Snake   Epoch Times - September 8, 2016
A glimpse into the animal kingdom's food chain 48 million years ago has been made possible by the discovery of a very unique fossil. A new study by researchers from Germany and Argentina describes the imprint showing an insect in the stomach of a lizard which had then been eaten by a snake. The specimen was found in the Messel Pit where the snake is believed to have somehow died soon after consuming its prey.

Amber-imprisoned lizards from Southeast Asia that date back 99 million years ago make up the oldest assemblage of tropical lizards ever found in amber, according to a new study. The tiny, trapped fossils, found in Myanmar, represent an unparalleled sampling of species diversity for tropical lizards from the Cretaceous era, which lasted from 145.5 million years ago to about 65.5 million years ago. The fossils are astonishingly well-preserved, the researchers said, including specimens with intact skin, visible skin pigment and soft tissues - and in one case, a lolling tongue. The study included remarkable close-up photographs of the lizards' scales, delicate claws and other unusually well-preserved features. One individual's spindly toes earned it the nickname "Nosferatu," after the long-fingered silent-movie vampire, said study co-author David Grimaldi, a curator in the division of invertebrate zoology at the American Museum of Natural History in New York.


Ancient Lizard Species May Be Evolutionary 'Missing Link'   Huffington Post - August 26, 2015
Paleontologists have discovered the fossilized remains of an extinct lizard species in Brazil that date back about 80 million years -- and the newly identified creature, named Gueragama sulamericana, may hold clues to the ancient history of iguanas. Modern-day iguanas are one of the most diverse groups of lizards alive today. They are categorized into two groups based on their teeth. Acrodontan iguanians, whose chompers are fused to the top of their jaws, are primarily found in the Eastern Hemisphere; non-acrodontans are primarily found in the Western Hemisphere.


Fossil remains of an Old World lizard discovered in the New World overturn long-held hypothesis of lizard evolution   PhysOrg - August 26, 2015
This fossil is an 80 million year old specimen of an acrodontan in the New World.


Oldest lizard embryos discovered in fossil eggs   PhysOrg - July 17, 2015
The eggs, roughly the size of a one-euro coin or sparrow egg, are about 125 million years old, and were discovered in Thailand in 2003. They have hard shells, unusual for lizards, and initial examinations concluded they must have been laid by a small carnivorous dinosaur or early type of bird. Not satisfied, an international team of scientists decided to look inside the fossil eggs using the powerful European Synchrotron Radiation Facility (ESRF) in Grenoble, France. High-resolution, ultra-bright X-rays allowed them to observe the finest details of the minute bones inside the six knob-covered shells, and recreate the skeletons in 3D. They found features of a "hitherto unknown lizard", including a long and slender skull ending in a pointed snout, and a "quadrate" - a jaw articulation bone found in the lizard family. These embryos were neither dinosaurs, nor birds, but lizards from a group called anguimorph.


A new beginning for baby mosasaurs   PhysOrg - April 10, 2015
A new birth story for a gigantic marine lizard that once roamed the oceans. Thanks to recently identified specimens at the Yale Peabody Museum of Natural History, paleontologists now believe that mighty mosasaurs - which could grow to 50 feet long - gave birth to their young in the open ocean, not on or near shore. The findings answer long-held questions about the initial environment of an iconic predator that lived during the time of the dinosaurs. Mosasaurs populated most waters of the Earth before their extinction 65 million years ago.


Fossil 'is first pregnant lizard'   BBC - July 21, 2011
A 120-million-year-old fossil is the oldest pregnant lizard ever discovered, according to scientists. The fossil, found in China, is a very complete 30cm (12in) lizard with more than a dozen embryos in its body. It was just days from giving birth when it died and was buried during the Cretaceous period.


Endogenous proteins found in a 70-million-year-old giant marine lizard   PhysOrg - May 2, 2011
With their discovery, the scientists Johan Lindgren, Per Uvdal, Anders Engdahl, and colleagues have demonstrated that remains of type I collagen, a structural protein, are retained in a mosasaur fossil. The scientists have used synchrotron radiation-based infrared microspectroscopy at MAX-lab in Lund, southern Sweden, to show that amino acid containing matter remains in fibrous tissues obtained from a mosasaur bone.