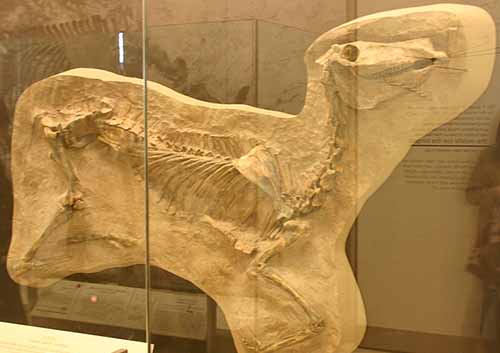 The evolution of the horse occurred over a period of 50 million years, transforming the small, dog-sized, forest-dwelling Eohippus into the modern horse. Paleozoologists have been able to piece together a more complete outline of the modern horse's evolutionary lineage than that of any other animal.

The horse belongs to the order Perissodactyla (odd-toed ungulates), the members of which all share hooved feet and an odd number of toes on each foot, as well as mobile upper lips and a similar tooth structure. This means that horses share a common ancestry with tapirs and rhinoceroses. The perissodactyls arose in the late Paleocene, less than 10 million years after the CretaceousĐPaleogene extinction event. This group of animals appears to have been originally specialized for life in tropical forests, but whereas tapirs and, to some extent, rhinoceroses, retained their jungle specializations, modern horses are adapted to life on drier land, in the much-harsher climatic conditions of the steppes. Other species of Equus are adapted to a variety of intermediate conditions.

The early ancestors of the modern horse walked on several spread-out toes, an accommodation to life spent walking on the soft, moist grounds of primeval forests. As grass species began to appear and flourish, the equids' diets shifted from foliage to grasses, leading to larger and more durable teeth. At the same time, as the steppes began to appear, the horse's predecessors needed to be capable of greater speeds to outrun predators. This was attained through the lengthening of limbs and the lifting of some toes from the ground in such a way that the weight of the body was gradually placed on one of the longest toes, the third.

Indigenous modern horses died out in the New World at the end of the Pleistocene, about 12,000 years ago, and thus were absent until the Spanish brought domestic horses from Europe, beginning in 1493. Escaped horses quickly established large wild herds. In the 1760s, the early naturalist Buffon suggested this was an indication of inferiority of the New World fauna, but later reconsidered this idea. William Clark's 1807 expedition to Big Bone Lick found "leg and foot bones of the Horses", which were included with other fossils sent to Thomas Jefferson and evaluated by the anatomist Caspar Wistar, but neither commented on the significance of this find.

The first equid fossil was found in the gypsum quarries in Montmartre, Paris in the 1820s. The tooth was sent to the Paris Conservatory, where it was identified by Georges Cuvier, who identified it as a browsing equine related to the tapir. His sketch of the entire animal matched later skeletons found at the site.Read more ...

Scientists are 'confident' they will be able to clone an extinct horse species from DNA in a 42,000-year-old frozen foal preserved in Siberian permafrost   Daily Mail - April 9, 2019
Scientists are 'confident of success' in extracting cells from a 42,000 year old extinct foal in order to clone its prehistoric species back to life, say reports. They see the 'Jurassic Park' attempt to restore the long-gone Lenskaya breed of horse as paving the way for later success in returning the giant woolly mammoth. The light ginger-colored foal - no more than two weeks old when it died - was preserved in near perfect condition in Siberian permafrost for 42,170 years, say experts.


Unlike today's zebras, prehistoric horses in parts of North America did not make epic migrations to find food or fresh water   PhysOrg - December 20, 2018
The findings suggest Florida was something of a horse paradise 5 million years ago, providing everything the animals could want in a relatively small area.


Scientists find perfectly preserved ancient foal in Siberia   PhysOrg - August 23, 2018
The fossil discovered in the region of Yakutia has its skin, hair, hooves and tail preserved. Yakutia is also famous having wooly mammoth fossils found in the permafrost. Scientists from Russia's Northeast Federal University who presented the discovery Thursday said the foal is estimated to be 30,000 to 40,000 years old. They believe it was about two months old when it died. Semyon Grigoryev, head of the Mammoth Museum in the regional capital of Yakutsk, was surprised to see the perfect state of the find. He noted it's the best-preserved ancient foal found to date. The foal was discovered in the Batagaika crater, a huge 100-meter (328-foot) deep depression in the East Siberian taiga.


Utah Landscapers Discover Remains of Ice Age Horse   Live Science - May 6, 2018
During the last ice age, a small horse about the size of a Shetland pony somehow trampled into a big lake. It's unclear how the animal died, but its body fell to the bottom of the lake, where it lay buried for about 16,000 years - that is, until this past fall, when landscapers in Utah unexpectedly unearthed the horse's remains in their backyard. The discovery is a rare one. Horses lived in North America from about 50 million to 11,000 years ago, when they went extinct on the continent before being reintroduced by the Europeans thousands of years later, but it's uncommon to find horse remains in Utah, a state that was partly covered by the prehistoric Lake Bonneville.


Scientists recover ancient DNA from a bizarre Ice Age mammal that stumped Darwin and discover it is related to horses and rhinos - 180 years after it was first found by the naturalist   Daily Mail - June 27, 2017
For the first time, scientists have recovered ancient DNA from one of the more puzzling species to have lived during the last Ice Age, a creature named Macrauchenia patachonica. The DNA allows researchers to finally map the mammal's relationships and place it within a group that includes horses, rhinos, and tapirs. One of the last 'South American native ungulates,' or SANUs, this animal likely weighed as much as 500 kilograms (1,100lbs) and had baffled biologists, including its discoverer Charles Darwin, for more than 180 years.


Ancient horse-like fetus discovered in Germany   BBC - October 8, 2015
A fossilized fetus belonging to an early relative of the horse has been described by scientists. The unborn foal was identified among the remains of its mother - a 48-million-year-old horse-like animal found in Germany's Messel pit in 2000. The mare probably fell into a lake shortly before birth - which led to outstanding preservation of the soft tissue from the fetus.


Reshaping the horse through millennia: Sequencing reveals genes selected by humans in domestication   Science Daily - December 15, 2014
Whole genome sequencing of modern and ancient horses unveils the genes that have been selected by humans in the process of domestication through the last 5,500 years, but also reveals the cost of this domestication. An international research group reports that a significant part of the genetic variation in modern domesticated horses could be attributed to interbreeding with the descendants of a now extinct population of wild horses. This population was distinct from the only surviving wild horse population.


Ancient horse bone yields oldest DNA sequence   BBC - June 27, 2013
A fragment of a fossilized bone thought to be more than 700,000 years old has yielded the genome of an ancient relative of modern-day horses. This predates all previous ancient DNA sequences by more than 500,000 years. A remnant of the long bone of an ancient horse was recovered from the Thistle Creek site, located in the west-central Yukon Territory of Canada. Paleontologists estimated that the horse had last roamed the region sometime between a half to three-quarters of a million years ago. An initial analysis of the bone showed that despite previous periods of thawing during inter-glacial warm periods, it still harbored biological materials - connective tissue and blood-clotting proteins - that are normally absent from this type of ancient material.


Ancient horses' spotted history reflected in cave art   BBC - November 7, 2011
Scientists have found evidence that leopard-spotted horses roamed Europe 25,000 years ago alongside humans. Until now, studies had only recovered the DNA of black and brown colored coats from fossil specimens. The result suggests that the dappled horses depicted in European cave art were inspired by real life, and are less symbolic than previously thought.


Saudi find shows horses used 9,000 years ago   PhysOrg - August 25, 2011
Saudi Arabia has found traces of a civilization that was domesticating horses about 9,000 years ago, 4,000 years earlier than previously thought, the kingdom said. "This discovery shows that horses were domesticated in the Arabian Peninsula for the first time more than 9,000 years ago, whereas previous studies estimated the domestication of horses in Central Asia dating back 5,000 years. The remains of the civilization were found close to Abha, in southwestern Asir province, an area known to antiquity as Arabia Felix. The civilization, given the name al-Maqari, used methods of embalming that are totally different to known processes. Among the remains found at the site are statues of animals such as goats, dogs, hawks, and a metre-tall bust of a horse. An international team of archaeologists published an article in January that suggested human beings could have been present on the Arabian Peninsula about 125,000 years ago. 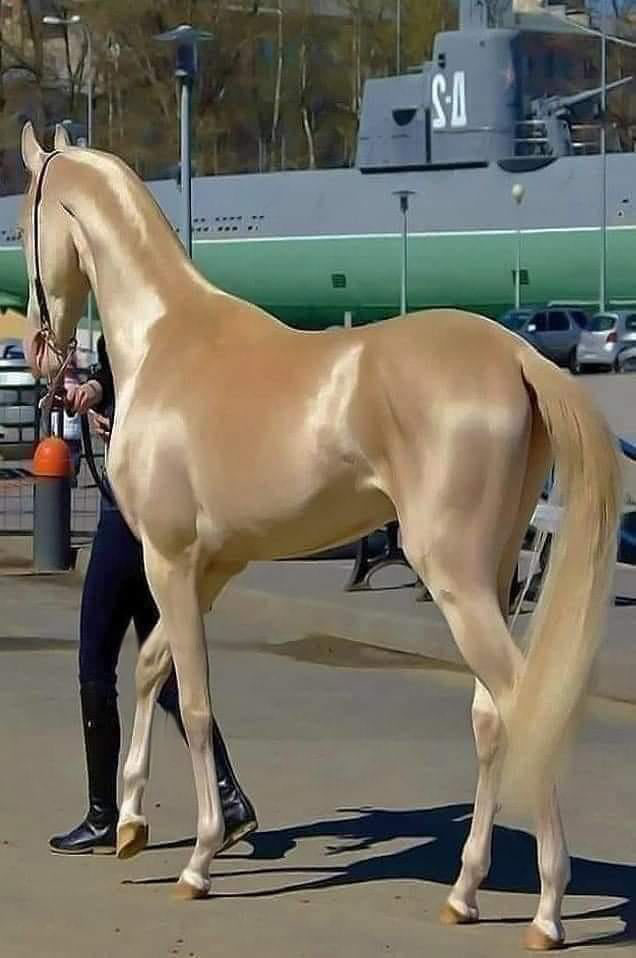