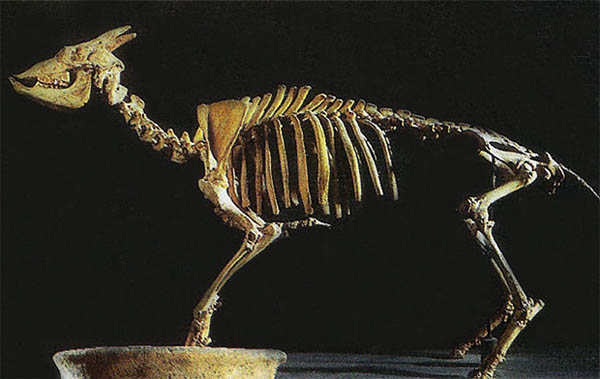 Goats are among the earliest animals domesticated by humans. The most recent genetic analysis confirms the archaeological evidence that the wild Bezoar ibex of the Zagros Mountains are the likely origin of almost all domestic goats today. Neolithic farmers began to herd wild goats for easy access to milk and meat, primarily, as well as for their dung, which was used as fuel, and their bones, hair, and sinew for clothing, building, and tools. The earliest remnants of domesticated goats dating 10,000 years before present are found in Ganj Dareh in Iran. Goat remains have been found at archaeological sites in Jericho, Choga Mami Djeitun and ‚ayonź, dating the domestication of goats in Western Asia at between 8000 and 9000 years ago. Studies of DNA evidence suggests 10,000 years BP as the domestication date. Historically, goat hide has been used for water and wine bottles in both traveling and transporting wine for sale. It has also been used to produce parchment. Read more ...


Extinct goat was cold-blooded   PhysOrg - November 18, 2009
An extinct goat that lived on a barren Mediterranean island survived for millions of years by reducing in size and by becoming cold-blooded, which has never before been discovered in mammals. The goat, Myotragus balearicus, lived on what is now Majorca, a Spanish island. The island had scarce resources, and there was no way for the goats to leave, and so scientists wondered how they had thrived for so long. A recently published research paper reveals the extinct goat survived by adjusting its growth rate and metabolism to suit the available food, becoming cold-blooded like reptiles. Paleontologists studying fossilized Myotragus bones compared them to bones of reptiles living in the same region at the same time, and found surprising similarities. The bones of warm-blooded animals show uninterrupted fast growth, while the bones of cold-blooded animals have parallel growth lines showing interrupted growth corresponding to growth cycles, rather like the rings seen in tree trunks. Growth and metabolism rates are adjusted to suit the amount of food available, whereas warm-blooded animals require food to be available continuously. The Myotragus bones showed the same interrupted growth as reptiles.


Goat Lived Like a Reptile -- A First   National Geographic - November 16, 2009
A prehistoric goat survived for millennia on a resource-poor island by living like a reptile - changing its growth rate and metabolism to match the available food supply, according to a new study of the animal's bones. The discovery marks the first time scientists have seen this cold-blooded survival strategy in mammals. The surprising skill likely allowed the goats to endure potentially fatal periods of scarcity on what is now the Spanish island of Majorca. But the technique, developed when the goats had no major natural enemies, came with costs that seem to have made the now extinct goats unable to survive the arrival of skilled predators - humans - some 3,000 years ago.

The goats' energy-saving adaptations made the animals small and slow, noted study co-author Meike Kšhler, a paleobiologist at the Autonomous University of Barcelona, Spain. Fossils of the ancient goat, called Myotragus, were first found on Majorca in the early 1900s. The bones show the species lived on the island for more than five million years. In most large mammals, constant high growth rates and metabolisms require continuous food supplies. By contrast, reptiles have slow growth rates and flexible metabolisms. Since resources can fluctuate dramatically on isolated islands, reptiles often displace mammals in such places.

But the new study, which looked at the bone histories of several Myotragus individuals, revealed that the goats may have fine-tuned their growth and metabolic rates both seasonally and during irregular times such as droughts - ,just like reptiles. The lizard-like lifestyle, however, meant that Myotragus's newborns were extremely small - the sizes of large rats - and the young took years to reach adult size. The goat also saved a lot of energy in its nervous system - among the body's most "costly" tissues - by sporting a brain only half the size of a similar-size hoofed mammal and eyes only a third as large. The combined effect was that Myotragus was sluggish, with slow reaction times, the bone study suggests. Like modern-day reptiles, the goats probably saved as much energy as possible just lying around and basking in the sun. The postcranial skeleton indicates that this animal was not able to run, jump, or move fast around, and [would have been] easy prey.