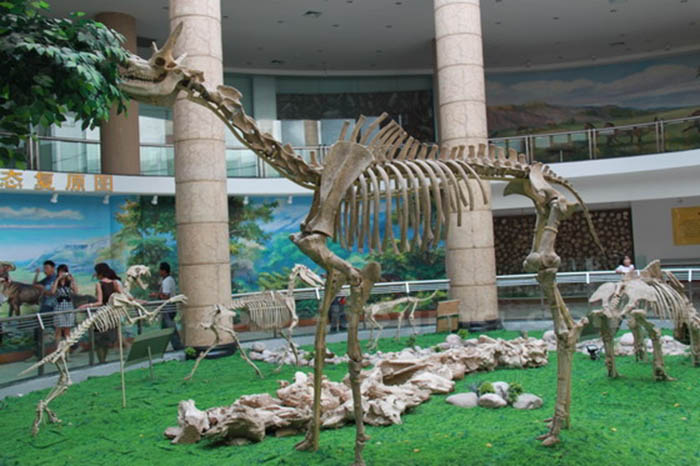 The giraffe belongs to the suborder Ruminantia. Many Ruminantia have been described from the mid-Eocene in Central Asia, Southeast Asia, and North America. The ecological conditions during this period may have facilitated their rapid dispersal. The giraffe is one of only two living species of the family Giraffidae, the other being the okapi. The family was once much more extensive, with over 10 fossil genera described. Their closest known relatives are the extinct climacocerids. They, together with the family Antilocapridae (whose only extant species is the pronghorn), belong to the superfamily Giraffoidea. These animals evolved from the extinct family Palaeomerycidae 8 million years ago (mya) in south-central Europe during the Miocene epoch. Read more ... 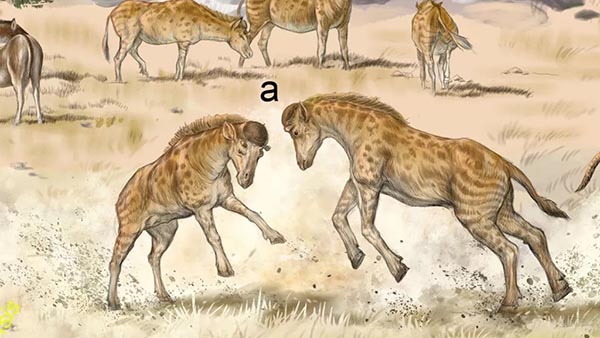 How the giraffe's long neck evolved has long been an evolutionary mystery. Although there have been different opinions about the process of giraffe neck elongation, scientists never doubted that the impetus for neck elongation was high foliage. However, as observation of giraffe behavior increased, scientists began to realize that the elegant, long neck of giraffes actually serves as a weapon in male courtship competition and this may be the key to the giraffe evolutionary mystery.


Short-necked giraffe relative discovered in China. It used its helmet head to bash rivals.   Live Science - June 2, 2022
Nearly 17 million years ago, a relative of modern giraffes that roamed northern China sported a thick, stumpy neck and a thick skull perfect for sparring with rival males in headbutting battles. The newly-discovered giraffe relative, a now-extinct species named Discokeryx xiezhi, also had a bony, disk-like shield on the top of its skull, covered in a protective layer of keratin the same type of tissue found in the horns of headbutters such as bulls and rams. The hard disk resembled a sort of squat helmet that sat atop the animal's head, scientists reported in a new analysis of several D. xiezhi fossils. D. xiezhi likely bashed their "helmets" together during fights over mates, just as modern male giraffes fight over females by violently thwacking their necks together, using a combat style known as "necking," the researchers concluded.


How the giraffe got its long neck: 9 million year old fossil discovered in Spain sheds light on the evolution of world's tallest animal   Daily Mail - November 1, 2017
While most giraffes now live in Africa, a primitive giraffe lived in modern day Spain nine million years ago. Archaeologists have discovered the remains of the creature, which had four horns and a short neck, on the Iberian Peninsula for the first time. The findings suggest that the ancestors of the world's tallest mammal migrated out of Africa - just like humans. The remarkable discovery could also help shed light on how the giraffe got its long neck - a question that has mystified experts for decades.


Ancient giraffe relative had thick legs, curly horns   Science Daily - January 13, 2016
An ancient relative of the giraffe was a huge, heavy animal with thick legs, a flat face and massive, curly horns flaring out from its skull. Dubbed Sivatherium giganteum, the impressive creature would have been shorter than today's giraffe, with a less elongated neck. Added to the large, flattened horns or "ossicones" on the top of the skull, each about 70 centimetres (28 inches) long, it also had two smaller, pointy horns just over the eyes.


Fossil vertebrae reveal clues to evolution of long neck in giraffe   PhysOrg - November 27, 2015
For many years, the researchers note, textbooks have used S. major as an example of evolution in progress, with a neck shorter than a modern giraffe (whose neck is on average 2 meters long), but longer than the okapi (just 60 centimeters) - the two represent its only modern relatives, both of which live in Africa - all three are members of the 'giraffid' family. But actual fossil evidence of the evolutionary changes had been lacking, in this new effort, the researchers sought to find that confirmation.


'Giraffe of the Mesozoic' Discovered   PhysOrg - September 8, 2009
A creature dubbed a "Giraffe of the Mesozoic" has been discovered in China. The animal, with its giraffe-like long neck and long forelimbs is the first well-preserved Early Cretaceous brachiosaurid dinosaur to be discovered in Asia. It lived about 100 million years ago. Brachiosaurs were herbivorous dinosaurs belonging to the sauropod family, but in comparison to some brachiosaurs, the new species, Qiaowanlong kangxii, is quite small, at only around 10 feet tall and close to 40 feet long. It weighed a mere 10 tons. 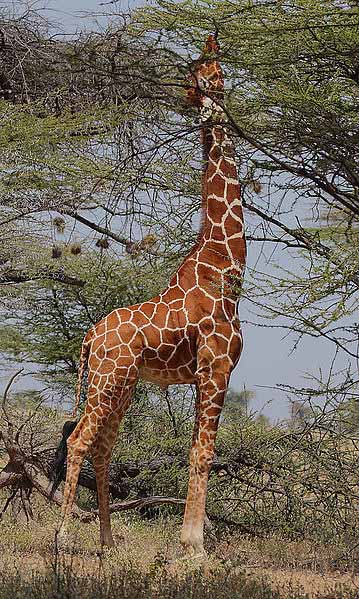