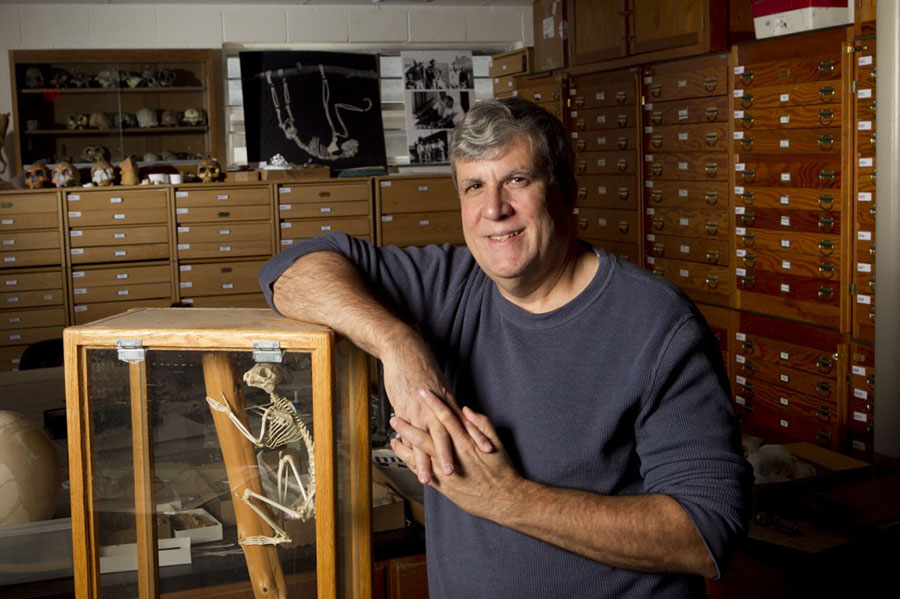 
Lemurs are primates belonging to the suborder Strepsirrhini. Like other strepsirrhine primates, such as lorises, pottos, and galagos, they share ancestral (or plesiomorphic) traits with early primates. In this regard, lemurs are popularly confused with ancestral primates; however, lemurs did not give rise to monkeys and apes (simians). Instead, they evolved independently in isolation on Madagascar. All modern strepsirrhines including lemurs are traditionally thought to have evolved from early primates known as adapiforms during the Eocene (56 to 34 mya) or Paleocene (66 to 56 mya).

Adapiforms, however, lack a specialized arrangement of teeth, known as a toothcomb, which nearly all living strepsirrhines possess. A more recent hypothesis is that lemurs descended from lorisiform (loris-like) primates. This is supported by comparative studies of the cytochrome b gene and the presence of the strepsirrhine toothcomb in both groups. Instead of being the direct ancestors of lemurs, the adapiforms may have given rise to both the lemurs and lorisiforms, a split that would be supported by molecular phylogenetic studies. The later split between lemurs and lorises is thought to have occurred approximately 62 to 65 mya according to molecular studies, although other genetic tests and the fossil record in Africa suggest more conservative estimates of 50 to 55 mya for this divergence. However, the oldest lemur fossils on Madagascar are actually subfossils dating to the Late Pleistocene.

Once part of the supercontinent Gondwana, the island of Madagascar has been isolated since it broke away from eastern Africa (~160 mya), Antarctica (~80-130 mya), and India (~80-90 mya). Since ancestral lemurs are thought to have originated in Africa around 62 to 65 mya, they would have had to have crossed the Mozambique Channel, a deep channel between Africa and Madagascar with a minimum width of about 560 km (350 mi). In 1915, paleontologist William Diller Matthew noted that the mammalian biodiversity on Madagascar (including lemurs) can only be accounted for by random rafting events, where very small populations rafted from nearby Africa on tangled mats of vegetation, which get flushed out to sea from major rivers.

Madagascar marvel: Divers find fossils of extinct giant lemurs   CNN - March 20, 2015
Around 5,000 years ago, the island of Madagascar would have resembled a Sci-Fi novel. Strange, prickly forests, gorilla-sized lemurs, pygmy hippopotamuses, horned crocodile and elephant birds whose eggs were 180 times the size of what you'd find in your fridge today, all called the African island home -- that was until the humans arrived. An n international team who recently uncovered one the most incredible cache of fossils found on the island to date in three flooded caves. The find is being touted as Madagascar's largest underwater graveyard. Their paleontological potential was first uncovered by Australian diver Ryan Dart. When Dart saw what was down there, he contacted his colleague Phillip Lehman, a diver for the Dominican Republic Speleological Society.


New extinct lemur species discovered in Madagascar   PhysOrg - May 26, 2009
Baptised Palaeopropithecus kelyus, this new specimen is smaller than the two species of these 'large sloth lemurs' already known and its diet made up of harder-textured foodstuffs. This discovery supports the idea of a richer biodiversity in recent prehistory (late Pleistocene and beginning of the Holocene). The results, currently available online, will be published in the Comptes Rendus de l'Academie des Sciences Palevol, July-August 2009.

Madagascar, where natural environments show a high level of endemism, is one of the last great biodiversity sanctuaries in the world. The island is home to a special group of primates, the lemurs. There are presently 15 genera and 71 species of these small mammals on Madagascar. The genus Palaeopropithecus is a group of subfossil giant lemurs. Up until now, two species had been described: P. ingens (in 1898) and P. maximus (in 1903). Palaeopropithecus have very specific adaptations, notably for locomotion, as they moved from branch to branch using all four limbs, with their head downwards, in a similar way to today's South American sloths.

Recent discoveries by the MAPPM on sites in northwest Madagascar have established the existence of a third species of Palaeopropithecus, which has been baptised P. kelyus. Scientists have suspected the existence of this species for more than 20 years. P. kelyus, whose weight is estimated around 35 kg, is smaller than the two known Palaeopropithecus species, but is very large in comparison with the largest living lemur, the Indri, which weighs only 10 kg. The other main difference of this new species is that its teeth are smaller. Its dental characteristics could be described from the P. kelyus subfossil maxilla fragment, showing a crista obliqua, a parastyle and a highly developed mesostyle. This morphology is reminiscent of the present day Propithecus genus.

While other Palaeopropithecus must have fed on leaves and fruit, the differences in the teeth of P. kelyus suggest that this animal could chew much tougher foods (notably seeds) compared with the other two known species. P. kelyus was found in an area of northwest Madagascar (Boeny region, Mahajanga province) with the particularity of being situated between large bays and rivers. This topography could have isolated P. kelyus from the other two species of Palaeopropithecus, one of which lived more in the south or centre, and the other in the north of Madagascar. In the 'evolution laboratory' that Madagascar represents, the discovery of this third Palaeopropithecus contributes to our understanding of the subfossil fauna species. More broadly, such work also includes the study of the island's human population.