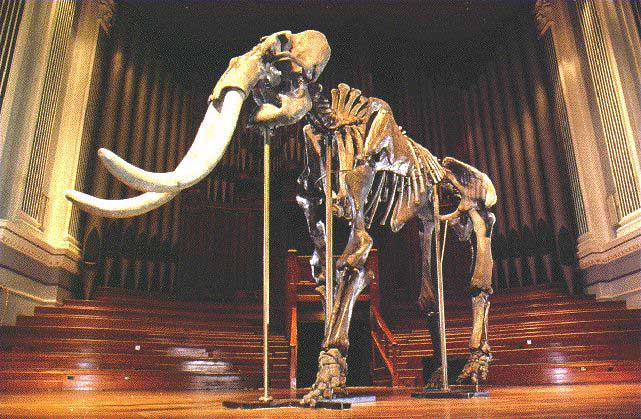 Elephants belong to the family Elephantidae, the sole remaining family within the order Proboscidea. Their closest extant relatives are the sirenians (dugongs and manatees) and the hyraxes, with which they share the clade Paenungulata within the superorder Afrotheria. Elephants and sirenians are further grouped in the clade Tethytheria.


Tooth wear sheds light on the feeding habits of ancient elephant relatives   PhysOrg - July 28, 2016
How can we ever know what ancient animals ate? For the first time, the changing diets of elephants in the last two million years in China have been reconstructed, using a technique based on analysis of the surface textures of their teeth.


Pakistan scientists 'find 1.1 million year-old stegodon tusk'   PhysOrg - February 16, 2016
A team of Pakistani researchers claims to have unearthed a 1.1 million-year-old stegodon tusk in the central province of Punjab, potentially shedding new light on the mammal's evolutionary journey. Stegodonts, distant cousins of modern elephants, are thought to have been present on earth from around 11 million years ago until the late Pleistocene period, which lasted until the end of the last Ice Age around 11,700 years ago. The tusk measures some eight feet (2.44 metres) in length and is around eight inches (20.3 cm) in diameter, making it the the largest ever discovered in the country, according to the team.


Giant Prehistoric Elephant Slaughtered by Early Humans   Science Daily - September 20, 2013
Research by a University of Southampton archaeologist suggests that early humans, who lived thousands of years before Neanderthals, were able to work together in groups to hunt and slaughter animals as large as the prehistoric elephant. Excavation revealed a deep sequence of deposits containing the elephant remains, along with numerous flint tools and a range of other species such as; wild aurochs, extinct forms of rhinoceros and lion, Barbary macaque, beaver, rabbit, various forms of vole and shrew, and a diverse assemblage of snails. These remains confirm that the deposits date to a warm period of climate around 420,000 years ago, the so-called Hoxnian interglacial, when the climate was probably slightly warmer than the present day.


Ancient Elephants Grazed Before They Had Teeth for It   Live Science - June 27, 2013
Ancient elephants switched from eating primarily leaves and shrubs to feeding on grass several million years before their teeth were fully adapted for grazing, according to a new study. The findings indicate that as the ancestors to modern elephants evolved, anatomical changes significantly lagged behind habitat and behavioral adaptations, said Adrian Lister, a paleontologist at the Natural History Museum in London, England.


Fossil Footprints Reveal Oldest Elephant Herd   Live Science - February 22, 2012
The world's oldest elephant tracks have now been revealed, 7-million-year-old footprints in the Arabian Desert, researchers say. These prehistoric footsteps, likely the work of some 13 four-tusked elephant ancestors, are the earliest direct evidence of how the ancestors of modern elephants interacted socially, and the oldest evidence of an elephant herd.


Elephant 'had aquatic ancestor'   BBC - April 15, 2008
An ancient ancestor of the elephant from 37 million years ago lived in water and had a similar lifestyle to a hippo, a fossil study has suggested. The animal was said to be similar to a tapir, a hoofed mammal which looks like a cross between a horse and a rhino. 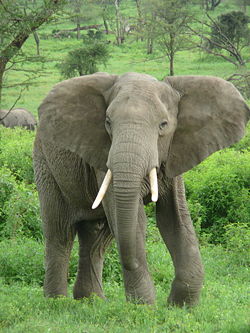