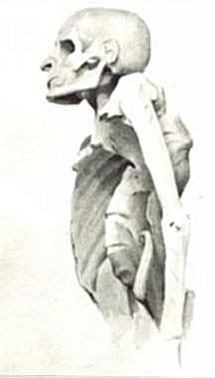 The ancestors of modern bacteria were unicellular microorganisms that were the first forms of life to appear on Earth, about 4 billion years ago. For about 3 billion years, all organisms were microscopic, and bacteria and archaea were the dominant forms of life. Although bacterial fossils exist, such as stromatolites, their lack of distinctive morphology prevents them from being used to examine the history of bacterial evolution, or to date the time of origin of a particular bacterial species. However, gene sequences can be used to reconstruct the bacterial phylogeny, and these studies indicate that bacteria diverged first from the archaeal/eukaryotic lineage. Read more ...


Prehistoric medicine is any use of medicine from before the invention of writing. Because the timing of the invention of writing varies per culture and region, the term "prehistoric medicine" encompasses a wide range of time periods and dates. The study of prehistoric medicine relies heavily on artifacts and human remains, and on anthropology. Previously uncontacted peoples and certain indigenous peoples who live in a traditional way have been the subject of anthropological studies in order to gain insight into both contemporary and ancient practices. Read more ...

Oldest UK case of rickets in Neolithic Tiree skeleton   BBC - September 10, 2015
The earliest known case of rickets in the UK has been identified in a 5,000-year-old skeleton found in Scotland. The disease, caused by Vitamin D deficiency linked to lack of sunlight, can lead to weak and deformed bones. It was identified in the remains of a Neolithic woman who had been buried on the Scottish island of Tiree.


Scientists find 240 million-year-old parasite that infected mammals' ancestor   PhysOrg - December 1, 2014
An egg much smaller than a common grain of sand and found in a tiny piece of fossilized dung has helped scientists identify a pinworm that lived 240 million years ago. It is believed to be the most ancient pinworm yet found in the fossil record. The discovery confirms that herbivorous cynodonts - the ancestors of mammals - were infected with the parasitic nematodes. It also makes it even more likely that herbivorous dinosaurs carried pinworms.


Discovery of a primordial cancer in a primitive animal   PhysOrg - June 24, 2014
Cancer is as old as multi-cellular life on earth and will probably never be completely eradicated. The causes of tumors are the so-called cancer genes. Data predicted that the first multi-cellular animals already had most of the genes which can cause cancer in humans.


Ancient Parasite Uncovered in Mesopotamian Tomb   Live Science - June 19, 2014
Some of the earliest evidence of a human parasite infection has been unearthed in an ancient burial site in Syria. The egg of a parasite that still infects people today was found in the burial plot of a child who lived 6,200 years ago in an ancient farming community. "We found the earliest evidence for a parasite [that causes] Schistosomiasis in humans," said study co-author Dr. Piers Mitchell, a biological anthropologist at the University of Cambridge in England. The oldest Schistosoma egg found previously, in Egyptian mummies, was dated to 5,200 years ago.


Researchers find 19 million-year-old genomic fossils of hepatitis B-like viruses in songbirds   PhysOrg - September 28, 2010
They've been sitting there for at least 19 million years, far longer than anyone previously thought this family of viruses had been in existence. The article, entitled "Genomic Fossils Calibrate the Long-Term Evolution of Hepadnaviruses," marks the first time that endogenous hepadnaviruses have been found in any organism. An endogenous virus is one that deposits itself or fragments of itself into the chromosome of an organism, allowing it to be passed from generation-to-generation. Previously, most of these known "fossilized" virus sequences came from retroviruses.


Oldest evidence of leprosy found in 4000-year-old skeleton PhysOrg - May 27, 2009
A biological anthropologist from Appalachian State University working with an undergraduate student from Appalachian, an evolutionary biologist from UNC Greensboro, and a team of archaeologists from Deccan College (Pune, India) recently reported analysis of a 4000-year-old skeleton from India bearing evidence of leprosy. This skeleton represents both the earliest archaeological evidence for human infection with Mycobacterium leprae in the world and the first evidence for the disease in prehistoric India.