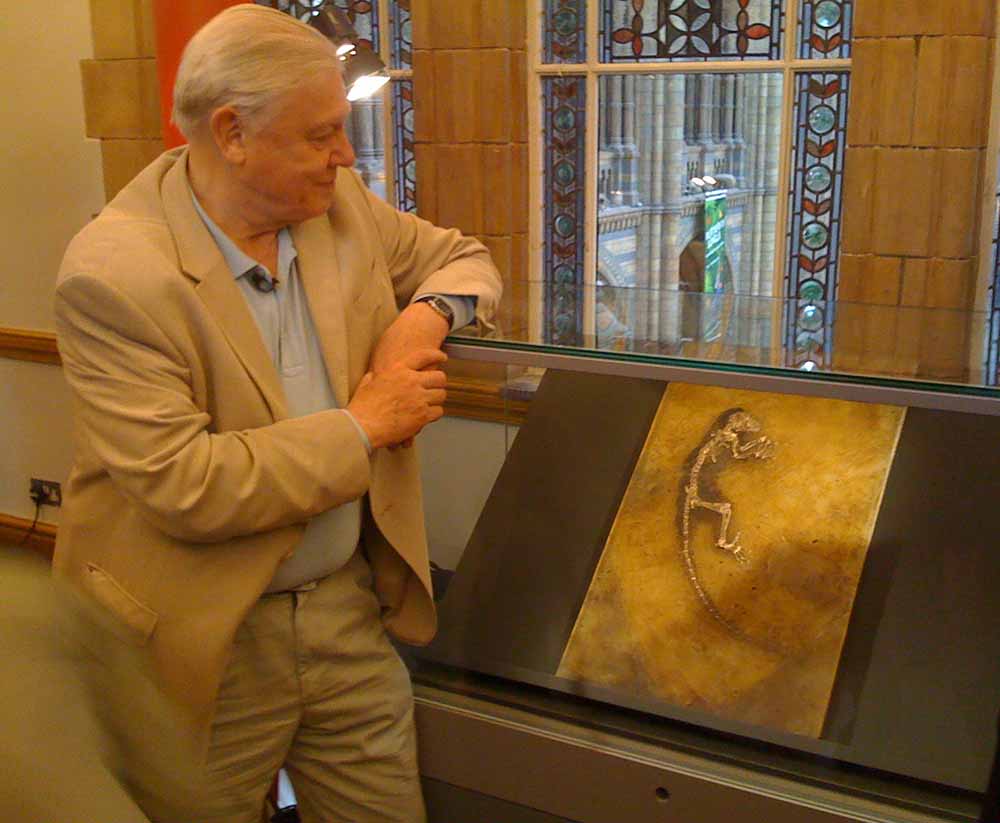 Darwinius is a genus within the infraorder Adapiformes, a group of basal strepsirrhine primates from the Eocene epoch. Its only known species is Darwinius masillae, approximately 47 million years ago (Lutetian stage) based on dating of the fossil site. The only known fossil, called Ida, was discovered in 1983[2] at the Messel pit, a disused quarry near the village of Messel, (Landkreis Darmstadt-Dieburg, Hesse) about 35 km (22 mi) southeast of Frankfurt am Main, Germany. The fossil, divided into a slab and partial counterslab after the amateur excavation and sold separately, was not reassembled until 2007. The fossil is of a juvenile female, approximately 58 cm (23 in) overall length, with the head and body length excluding the tail being about 24 cm (9.4 in). It is estimated that Ida died at about 80Đ85% of her projected adult body and limb length.

The genus Darwinius was named in commemoration of the bicentenary of the birth of Charles Darwin, and the species name masillae honors Messel where the specimen was found. The creature appeared superficially similar to a modern lemur. The authors of the paper describing Darwinius classified it as a member of the primate family Notharctidae, subfamily Cercamoniinae,suggesting that it has the status of a significant transitional form (a "link") between the prosimian and simian ("anthropoid") primate lineages. Others have disagreed with this placement. Concerns have been raised about the claims made about the fossil's relative importance and the publicizing of the fossil before adequate information was available for scrutiny by the academic community. Read more

Scientists hail stunning fossil of a 47-million-year-old, lemur-like creature   BBC - May 19, 2009
The beautifully preserved remains of a 47-million-year-old, lemur-like creature have been unveiled in the US. The preservation is so good, it is possible to see the outline of its fur and even traces of its last meal. The fossil, nicknamed Ida, is claimed to be a "missing link" between today's higher primates - monkeys, apes and humans - and more distant relatives. But some independent experts, awaiting an opportunity to see the new fossil, are sceptical of the claim. And they have been critical of the hype surrounding the presentation of Ida.


Ancient Human Ancestor 'Ida' Discovered - Missing Link?   Live Science - May 19, 2009
A discovery of a 47-million-year-old fossil primate that is said to be a human ancestor was announced and unveiled today at a press conference in New York City. Known as "Ida," the nearly complete transitional fossil is 20 times older than most fossils that provide evidence for human evolution. It shows characteristics from the very primitive non-human evolutionary line (prosimians, such as lemurs), but is more related to the human evolutionary line (anthropoids, such as monkeys, apes and humans).


Common Ancestor Of Humans, Modern Primates? 'Extraordinary' Fossil Is 47 Million Years Old   Science Daily - May 19, 2009
In what could prove to be a landmark discovery, a leading paleontologist said scientists have dug up the 47 million-year-old fossil of an ancient primate whose features suggest it could be the common ancestor of all later monkeys, apes and humans.