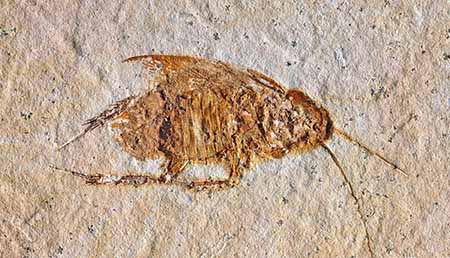 
49-Million-Year-Old Cockroach Fossil Found   Live Science - January 7, 2014
A common European and African cockroach may have gotten its evolutionary start in North America, according to new fossil findings. More than 70 species of cockroaches in the genus Ectobius currently crawl through Europe and Africa, making them amongst the most common cockroaches in that part of the world. They measure only about 0.25 to 0.5 inches long (6.35 to 12.7 millimeters), considerably smaller than the American cockroaches (Periplaneta Americana) that can grow to about 1.5 in. long (4 centimeters) and plague major cities and small towns across the United States.


Giant Roach Fossil Found in Ohio Coal Mine   National Geographic - November 12, 2001
Geologists at Ohio State University have discovered a fossil of a giant prehistoric cockroach that roamed North America about 300 million years ago. The cockroach is about 3.5 inches long (9 centimeters) - twice as large as the average modern American roach but slightly smaller than some specimens found in the tropics. The roach, which predates the dinosaurs by about 55 million years, scuttled around Ohio during the Carboniferous period when the state was hot and swampy. Although bug fossils are quite common it is rare to find complete specimens. The Ohio specimen, which was found in a coal mine, was surprisingly well preserved. The mine has also yielded a fossil of one of the smallest cockroaches, and another fossil has preserved the ancient color patterns of that insect.