Why we have chins: Our chin comes from evolution, not mechanical forces   Science Daily - April 14, 2015 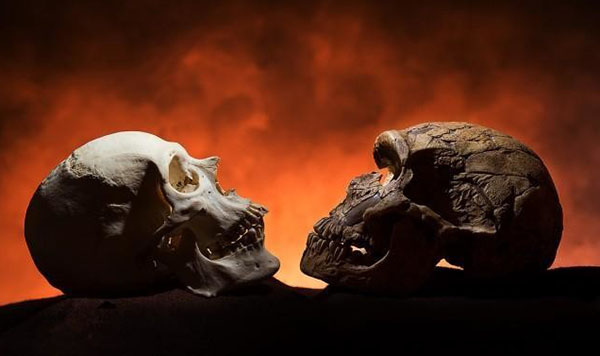 Notice how the modern skull, on the left, has a point at the bottom of the face compared to the Neandethal-era skull on the right. The reason: Only modern humans have chins. Why are modern humans the only species to have chins? Researchers say it's not due to mechanical forces, such as chewing, but may lie in our evolution: As our faces became smaller, it exposed the bony prominence at the lowest part of our heads. New research led by Holton and colleagues at the UI posits that our chins don't come from mechanical forces such as chewing, but instead results from an evolutionary adaptation involving face size and shape -- possibly linked to changes in hormone levels as we became more societally domesticated.

The finding, if true, may help settle a debate that's gone on intermittently for more than a century why modern humans have chins and how they came to be. Using advanced facial and cranial biomechanical analyses with nearly 40 people whose measurements were plotted from toddlers to adults, the UI team concludes mechanical forces, including chewing, appear incapable of producing the resistance needed for new bone to be created in the lower mandible, or jaw area. Rather, they write in a paper published online in the Journal of Anatomy, it appears the chin's emergence in modern humans arose from simple geometry: As our faces became smaller in our evolution from archaic humans to today -- in fact, our faces are roughly 15 percent shorter than Neanderthals' -- the chin became a bony prominence, the adapted, pointy emblem at the bottom of our face.


Why Humans Have Chins   Live Science - April 14, 2015
The Wicked Witch of the West can thank facial evolution for her iconic, pointy chin, new research suggests. And so can everyone else. Compared with other human relatives such as Neanderthals, modern Homo sapiens have particularly prominent chins. Some researchers have hypothesized that the modern human chin helps the jaw stand up to the forces generated by chewing, said Nathan Holton, an anthropologist at the University of Iowa.