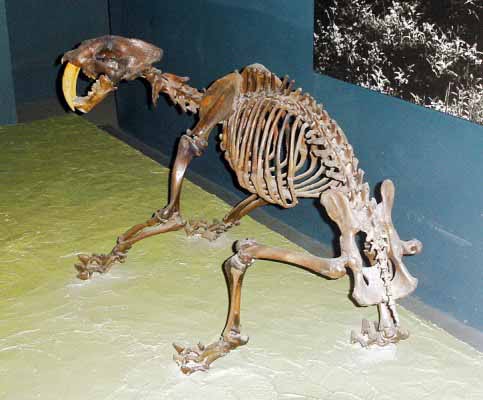 The cat gap is a period in the fossil record of approximately 25 to 18.5 million years ago in which there are few fossils of cats or cat-like species found in North America. The cause of the "cat gap" is disputed, but may have been caused by changes in the climate (global cooling), changes in the habitat and environmental ecosystem, the increasingly hypercarnivorous trend of the cats (especially the nimravids), volcanic activity, evolutionary changes in dental morphology of the Canidae species present in North America, or possibly even attributed to patterns of periodicity of extinctions (climatic/floral cycles called "van der Hammen cycles").

All modern carnivorans, including cats, evolved from miacoids, which existed from approximately 66 to 33 million years ago. Miacoid species gave rise to Proailurus (meaning "first cat"; also called "Leman's Dawn Cat"), which appeared about 30 million years ago, and is generally considered the first "true cat". There were other cat-like species before Proailurus, but not within the family of the order Carnivora. Read more ... 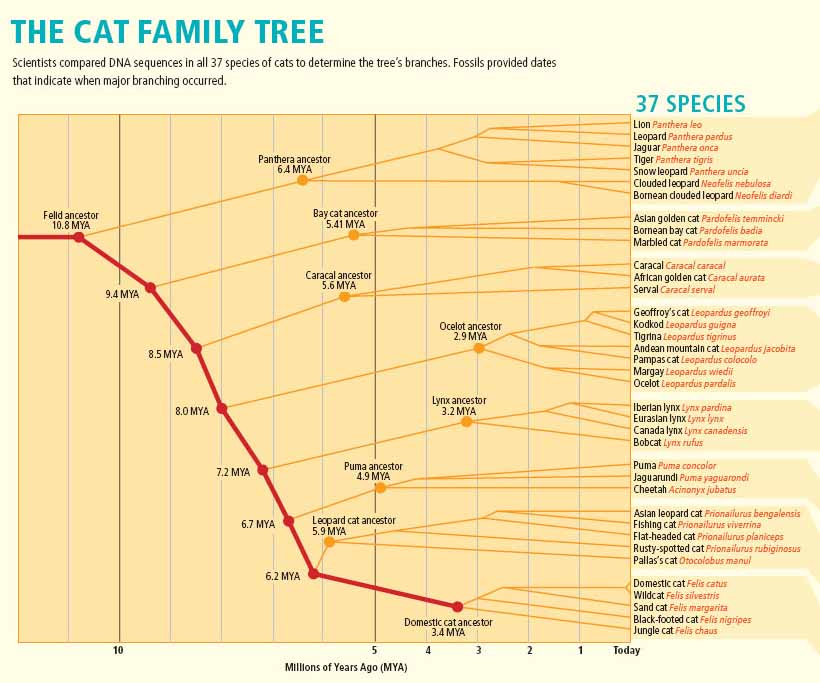 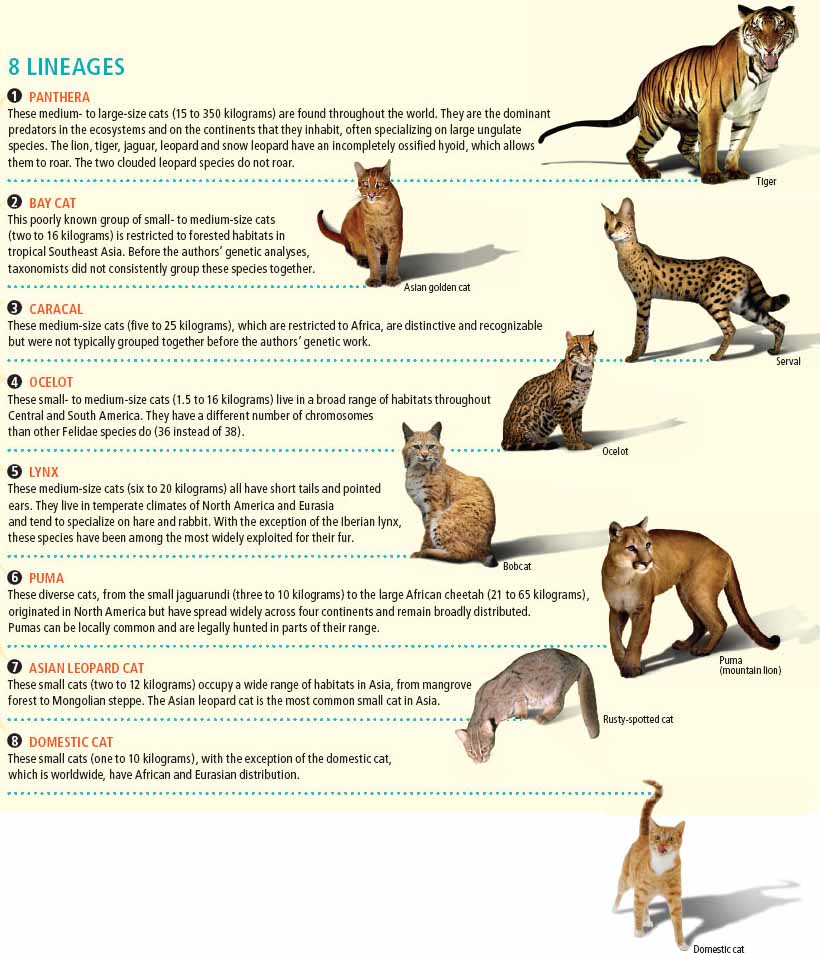 Saber-toothed cat fossils provide evidence of canines able to puncture a skull   PhysOrg - June 3, 2019
A team of researchers with members affiliated with several institutions in Argentina has found evidence that suggests the canine teeth of the saber-toothed cat were strong enough to puncture the skulls of other members of the same species.


Modern lions' origin revealed by genetic analysis   BBC - April 2, 2014
The origin and history of modern lions have been revealed by scientists. A genetic analysis of living lions and museum specimens confirms modern lions' most recent common ancestor lived around 124,000 years ago. Modern lions evolved into two groups; one lives in Eastern and Southern Africa, the other includes lions in Central and West Africa, and in India. This second group is now endangered, meaning half the genetic diversity of modern lions is at risk of extinction.


Oldest big cat fossil found in Tibet   BBC - November 13, 2013
The oldest big cat fossils ever found - from a previously unknown species "similar to a snow leopard" - have been unearthed in the Himalayas. The skull fragments of the newly-named Panthera blytheae have been dated between 4.1 and 5.95 million years old. Their discovery in Tibet supports the theory that big cats evolved in central Asia - not Africa - and spread outward.


Big cat fossil found in North Sea    BBC - November 19, 2008
The partial leg bone of a sabre-toothed cat has been dredged from the seabed by a trawler in the North Sea. The rare fossil, which is between one and two million years old and was found near the UK coast, is from a type of sabre-tooth called a scimitar cat. According to paleontologist Dick Mol, it belonged to an animal that was as heavy as a small horse. It is the furthest north this species has ever been found, and the first time remains have come from the North Sea. The dry steppe landscape, criss-crossed by rivers, where animals such as the scimitar cat once roamed was flooded at the end of the last Ice Age.


Oldest Known Pet Cat? 9,500-Year-Old Burial Found on Cyprus -    National Geographic - April 8, 2004
Since at least the time of the ancient Egyptians, cats have been cherished as companions, worshipped as idols, and kept as agents of pest control and good luck. But now French archaeologists have found evidence that our close relationship with cats may have begun much earlier. The carefully interred remains of a human and a cat were found buried with seashells, polished stones, and other decorative artifacts in a 9,500-year-old grave site on the Mediterranean island of Cyprus. This new find, from the Neolithic village of Shillourokambos, predates early Egyptian art depicting cats by 4,000 years or more.


Dig discovery is oldest 'pet cat' BBC - April 8, 2004
The oldest known evidence of people keeping cats as pets may have been found by archaeologists. The discovery of a cat buried with what could be its owner in a Neolithic grave on Cyprus suggests domestication of cats had begun 9,500 years ago. It was thought the Egyptians were first to domesticate cats, with the earliest evidence dating to 2,000-1,900 BC. French researchers writing in Science magazine show that the process actually began much earlier than that. The evidence comes from the Neolithic, or late stone age, village of Shillourokambos on Cyprus, which was inhabited from the 9th to the 8th millennia BC.