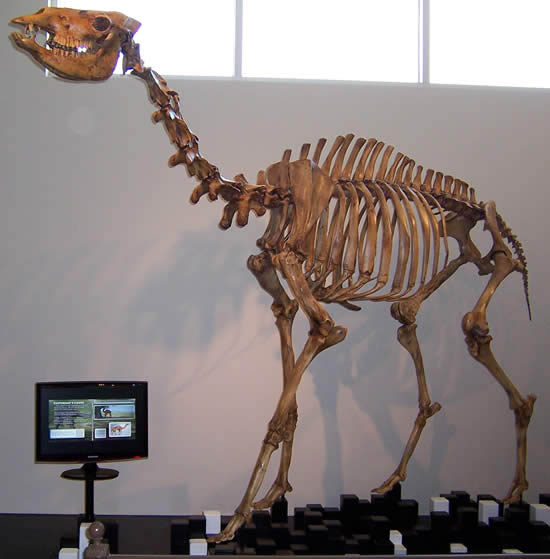 The earliest known camel, called Protylopus, lived in North America 40 to 50 million years ago (during the Eocene). It was about the size of a rabbit and lived in the open woodlands of what is now South Dakota. By 35 million years ago, the Poebrotherium was the size of a goat and had many more traits similar to camels and llamas. The hoofed Stenomylus, which walked on the tips of its toes, also existed around this time, and the long-necked Aepycamelus evolved in the Miocene.

The direct ancestor of all modern camels, Procamelus, existed in the upper Miocone and lower Pliocene. Around 3Đ5 million years ago, the North American Camelidae spread to South America via the Isthmus of Panama, where they gave rise to guanacos and related animals, and to Asia via the Bering land bridge. Surprising finds of fossil Paracamelus on Ellesmere Island beginning in 2006 in the high Canadian Arctic indicate the dromedary is descended from a larger, boreal browser whose hump may have evolved as an adaptation in a cold climate. This creature is estimated to have stood around nine feet tall.

The last camel native to North America was Camelops hesternus, which vanished along with horses, short-faced bears, mammoths and mastodons, ground sloths, sabertooth cats, and many other megafauna, coinciding with the migration of humans from Asia.


Intact Ottoman 'war camel' found in Austrian cellar   CNN - April 1, 2015
A complete camel skeleton dug up from a 17th-century Austrian cellar shows tell-tale signs that it was a valuable riding animal in the Ottoman army. It was probably left behind or traded in the town of Tulln following the Ottoman siege of nearby Vienna in 1683. DNA analysis shows that the beast - the first intact camel skeleton found in central Europe - was a Bactrian-dromedary hybrid, popular in the army. It also has bone defects that suggest it wore a harness and was ridden.


Domesticated Camels Came to Israel in 930 B.C., Centuries Later Than Bible Says   National Geographic - February 11, 2014
Newly published research by two archaeologists at Tel Aviv University in Israel shows that camels weren't domesticated in the eastern Mediterranean until the 10th century B.C. - several centuries after the time they appear in the Bible. While there are conflicting theories about when the Bible was composed, the recent research suggests it was written much later than the events it describes. This supports earlier studies that have challenged the Bible's veracity as a historic document. The biblical angle wasn't the focus of the recent research, though, just an after-the-fact observation.

New fragments of leg bone discovered in the far north of Canada suggest that modern camels are descended from ancestors which lived within the Arctic Circle. Thirty fossilized pieces of a lower leg bone belonging to a camel which lived 3.5 million years ago were found by researchers on Ellesmere Island, in Canada's High Arctic. The giant mammals would likely have measured up to 3.5m (11ft) in height and had one hump in which they stored fat to help them survive in the Arctic, at a time when the region was less cold than today and covered with forest, researchers said. The evolutionary adaptation today allows camels to thrive in deserts because storing all their fat on their back helps them keep cool in extreme temperatures.


Giant Camels Roamed the Arctic 3.5 Million Years Ago   Live Science - March 5, 2013
Camels are the poster animals for the desert, but researchers now have evidence that these shaggy beasts once lived in the Canadian High Arctic. The fossil remains of a 3.5-million-year-old camel were found on Ellesmere Island in Canada's northernmost territory, Nunavut. The camel was about 30 percent bigger than modern camels and was identified using a technique called collagen fingerprinting. The finding, detailed today (March 5) in the journal Nature Communications, suggests that modern camels stemmed from giant relatives that lived in a forested Arctic that was somewhat warmer than today. "It's the first evidence that camels were ever there," lead study author and paleobiologist Natalia Rybczynski of the Canadian Museum of Nature in Ottawa told LiveScience."It is surprising because usually we associate camels with arid and semi-arid habitats."


Fossils of Crocodile-like Camel Found   Discovery - March 5, 2012
Camels with long, crocodile-like snouts once lived near what is now the Panama Canal, suggests a new study. The camels lived 20 million years ago and are now considered to be among the oldest known animals from Panama. While researchers are sure the ancient camels were herbivores that likely browsed in forests, they are still analyzing seeds and pollen to better understand the environment of the ancient tropics.


Ancient Camels Butchered in Colorado, Stone Tools Show   National Geographic - February 27, 2009
Humans may have hunted down Ice Age camels 13,000 years ago on what are now the streets of Boulder, Colorado, a new analysis of ancient tools suggests. Blood residue on stone blades found recently in a Boulder resident's backyard could be the first evidence that the implements were used to butcher horses and American camels. The extinct camel species had almost no hump and was slightly taller than a modern camel, with a shoulder height of seven feet (about two meters). The tools are thought to be products of the Clovis people, early Americans known for their distinctive spearheads.


Ice Age Camels Butchered in Colorado   Live Science - February 25, 2009
Stone tools found in Boulder, Colorado were used to butcher camels and horses 13,000 years ago, before the beasts became extinct in the region. A new biochemical analysis of a rare Clovis-era stone tools was done at the University of Colorado at Boulder. It is the first study to identify protein residue from extinct camels on North American stone tools and only the second to identify horse protein residue on a Clovis-age tool, said CU-Boulder Anthropology Professor Douglas Bamforth, who led the work. The Clovis culture is believed by many archaeologists to coincide with the time the first Americans arrived on the continent from Asia via the Bering Land Bridge, about 13,000 to 13,500 years ago, Bamforth said.


Malaysian archaeologists find complete Neolithic skeletons: report     AFP - September 19, 2008
Scientists have unearthed a camel jawbone in the Syrian desert that they think may be a previously unknown tiny species of the animal and say dates back a million years. The jawbone was found last month near the village of Khowm in the Palmyra region, about 150 miles northeast of Damascus, said Heba al-Sakhel, the head of the Syrian National Museum who was one of the leaders of the team of Syrian and Swiss researchers.

Last year, the team discovered the bones of a giant camel in Syria dating back 100,000 years. That animal stood between 10 and 13 feet tall - about twice the size of latter-day camels and the height at the shoulder of many African elephants. The new find, along with the remains of the giant camel, could offer important clues about the animal's evolution, the researchers said. "It is a very important discovery," said Jean-Marie Le Tensorer, who leads the Swiss side of the team. He said it is the oldest camel bone to be unearthed in the Middle East and probably worldwide. The camel appeared to be very small and could be a new species, but he stressed that more studies were needed to confirm.


10,000-year-old camel bones found in Arizona   MSNBC - April 30, 2007
Workers digging at the future site of a Wal-Mart store in suburban Mesa have unearthed the bones of a prehistoric camel that's estimated to be about 10,000 years old. Arizona State University geology museum curator Brad Archer hurried out to the site Friday when he got the news that the owner of a nursery was carefully excavating bones found at the bottom of a hole being dug for a new ornamental citrus tree. "There's no question that this is a camel; these creatures walked the land here until about 8,000 years ago, when the same event that wiped out a great deal of mammal life took place," Archer told The Arizona Republic. Wal-Mart officials and Greenfield Citrus Nursery owner John Babiarz have already agreed that the bones will go directly on display at ASU. Archer said some of them may be placed on display very soon, but most will take several months to get sorted out and stabilized. In my 15 years at ASU doing this work I can think of six or seven times when finds this important have been made, Archer said. "This is the first camel. Others have been horses, once a mammoth on Happy Valley Road. This sort of thing is extremely rare."


Remains of giant camel discovered in Syria   BBC - October 10, 2006
Archaeologists have discovered the 100,000-year-old fossilized remains of a previously unknown giant camel species in Syria.The bones of the dromedary were unearthed by a Swiss-Syrian team of researchers near the village of El Kowm in the central part of the country. The animal is thought to have been double the size of a modern-day camel.It may even have been killed by humans, who were living at the once water-rich site during the same period. Jean-Marie Le Tensorer of the University of Basel commented: "It was not known that the dromedary was present in the Middle East more than 10,000 years ago."The camel's shoulders stood three metres high and it was around four metres tall; as big as a giraffe or an elephant. Nobody knew that such a species had existed," he said. Professor Le Tensorer, who has been excavating at the desert site in Kowm since 1999, said the first large bones were found some years ago but were only confirmed as belonging to a camel after more bones from several parts of the same animal were recently discovered.

Between 2005 and 2006, more than 40 bone fragments of giant camels were found by the team.The big species has been found as far back as 150,000 years ago. But fossils from other species of camel have been unearthed at the site dating to one million years ago. Human remains from the same period as the giant camel have also been discovered at the site. The radius (forearm) and tooth have been taken to Switzerland, where they are undergoing anthropological analysis.

"The bone is that of a Homo sapiens, or modern man, but the tooth is extremely archaic, similar to that of a Neanderthal. We don't know yet what it is exactly. Do we have a very old Homo sapiens or a Neanderthal?" said Professor Le Tensorer." We expect to find more bones that would help determine what kind of man it was." El Kowm, the site where the remains were discovered along with flint and stone weapons, is a 20km-wide (14 miles) gap between two mountain ranges with natural springs. 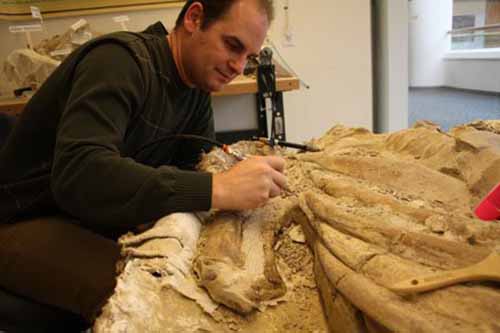 A geologist searching for earthquake faults at a construction site found something even more earth-shattering: the 100,000-year-old fossilized remains of a North American camel. Camels originated in North America 15 million years ago, and as they died out on this continent. The discovery by Robert Lemmer yielded four vertebrae - the sixth and seventh cervical vertebrae, the thoracic vertebra and a neck vertebra. Later another neck vertebra was discovered in a 12-foot deep trench dug to search for quake faults in the parking lot of a bowling alley. Fossilized bones were covered in a plaster solution by two paleontological preparers, Howell Thomas and Doug Goodreau, and transported to a laboratory at the Los Angeles County Natural History Museum.

No more remains were found in the area. "That would indicate it was either the kill of a predator or scavenged by something after it died, and the animal dragged off the other parts leaving the vertebrae behind," Thomas said. "Of course, that's just a guess. There's no way to know for sure. But it's a reasonable explanation." Thomas determined the exact species of the camel by comparing its bones with those of another camel at the museum.