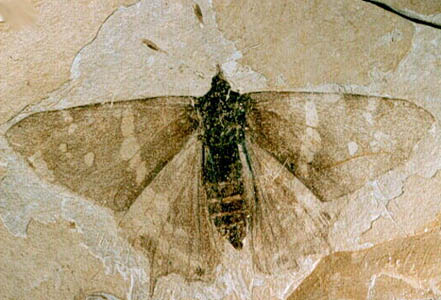 Butterfly evolution is the origin and diversification of butterflies through geologic time and over a large portion of the Earth's surface. The earliest known butterfly fossils are from the mid Eocene epoch, between 40-50 million years ago. Their development is closely linked to the evolution of flowering plants, since both adult butterflies and caterpillars feed on flowering plants. Of the 220,000 species of Lepidoptera, about 45,000 species are butterflies, which probably evolved from moths. Butterflies are found throughout the world, except in Antarctica, and are especially numerous in the tropics; they fall into eight different families. Read more ... 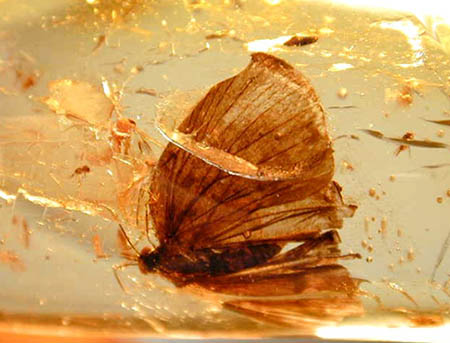 Butterflies may be far more ancient creatures than previously believed, reveals a new study of fossil specimens exquisitely preserved in amber. The oldest known butterflies fossilized in rocks suggest the winged insects date back to about 40 or 50 million years ago. But evidence from the five stunning amber specimens now suggests it is possible butterflies may have even fluttered around the heads of dinosaurs, which were wiped out 65 million years ago.

The amber pieces come from the Dominican Republic and each contains a perfectly preserved metalmark butterfly, which is now extinct. "It was just incredible," says Robert Robbins, one of the researchers at the Smithsonian Institution in Washington DC, US. "It's no different than if you took a modern day butterfly and put it under a light microscope." But it is Voltinia dramba's relationship to its closest living relative in Mexico which gives vital clues to the evolution of butterflies.

"It would appear it diverged from its closest living relative almost ago 40 to 50 million years ago," Robbins told New Scientist. "That would mean that the major families of butterfly already existed, so it would appear butterflies are somewhat older than that." The evolution of many animal groups took off after mass extinctions annihilated the dinosaurs at the end of the Cretaceous period. It means the precursors of butterflies were already there. Whether butterflies actually existed in the Cretaceous is a pretty interesting questions.

Robbins and fellow entomologists Jason Hall and Donald Harvey came across the first intricate amber fossil after it was spotted by a scout at a gem show in the early 1990s. Over the next few years, four more such fossils were found, enabling the group to understand the butterfly's evolutionary development better. When its closest living relative, Voltinia danforthi, was discovered in Mexico, they were able to draw their conclusions.

The amber fossils themselves are between 15 to 25 million years old. But theories about how the Caribbean islands formed and the current distribution of metalmark butterflies helped the team pinpoint when the two species diverged. Today, only one living species of metalmark butterfly remains in the Caribbean islands. But central and south America have over 1200 species. Metalmarks prefer wet areas and typically live in the interior of Amazonian rain forests or cloud forests, says Robbins, and are poor at traveling over water.

We know from our recent work that the species in Mexico and in the amber fossil are sister species - each is each other's closest relative. We also know it's at least 15 to 25 million years since they diverged. But, because they are so poor at dispersing across anything other than rainforest, we are pretty certain that the amber butterfly must have essentially ridden on the islands as they moved from central America to the Caribbean with plate tectonics. The movement of Hispaniola - the island on which the Dominican Republic and Haiti sit side by side - would date the separation of the butterfly species to around 40 to 50 million years ago. 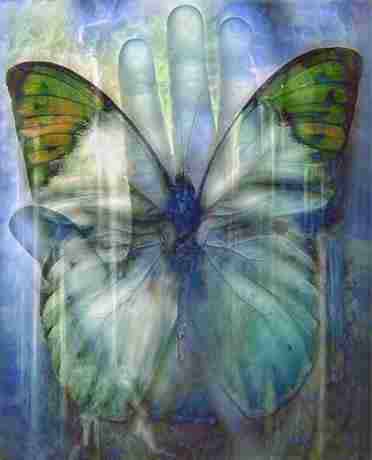 
Scientific research has shown that the butterfly is the only living being capable of changing entirely its genetic structure during the process of transformation: the caterpillar's DNA is totally different from the butterfly's. Thus, it is the symbol of total transformation. Butterfly represents a need for change and greater freedom, and at the same time it represents courage: one requires courage to carry out the changes necessary in the process of growth.

Its Medicine is related to the air and the mental powers. It teaches us to find clarity in the mental processes, to organize projects or to figure out the next step in our internal growth. If Butterfly is your Power Animal or if you feel in any way attracted to it, this means you are ready to undergo some kind of transformation. Examine which stage calls your attention the most: the egg is the beginning, the birth of some project or idea. The larva is de decision to manifest something in the physical world. The cocoon has to do with "going inside", either through insight or the development of the project or idea. The breaking of the cocoon deals with sharing the splendor of your creation with the whole world. Once you understand the stage you are on, you can discover which is the next step.