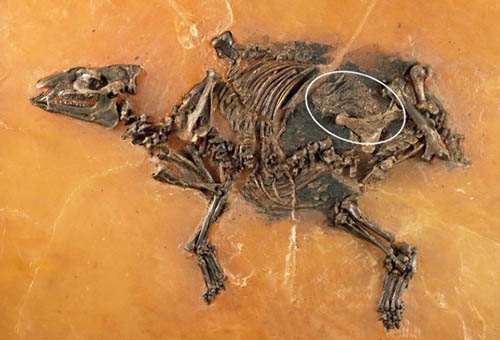 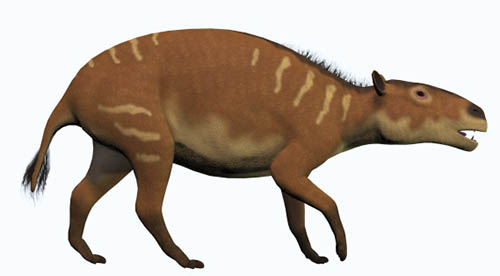 When paleontologists discovered the 47-million-year fossil of a prehistoric horse in 2000, they didn't yet realize a rare treasure was hidden inside. Now, high-resolution X-ray technology has revealed the Eurohippus messelensis mare was pregnant. In fact, the size of the unborn foal discovered in the fossil indicates that it was close to term, and its position in the mother's uterus indicates the mother and foal did not die during labor. During the analysis, the researchers detected the remains of the ancient mare's uterine wall and the broad ligament, which connects the uterus to the backbone. The researchers also identified the horse's placenta, making it the second known example of a fossil with this structure preserved. These structures indicate that reproduction in the tiny ancient horse, which was roughly the size of a terrier, was similar to reproduction in horses today, according to the researchers.


Oldest Fossil of Reptile Live Birth Found   Live Science - February 12, 2014
A new fossil that captures both birth and death reveals the earliest ancestors of the giant prehistoric sea predators called ichthyosaurs birthed their babies headfirst, according to a new study. The fossil of an ancient Chaohusaurus mother that likely died while in labor also suggests that reptilian live birth only evolved on land. Ichthyosaurs were top ocean predators during the age of the dinosaurs. Sleek, streamlined swimmers that grew as long as a bus, they had teeth-filled snouts and enormous eyes for snatching prey. These air-breathing carnivores arose from land reptiles that moved into the water from land during the early Triassic period, between 251 million and 247 million years ago. (The Triassic period follows one of the biggest mass extinctions on Earth, which killed 96 percent of marine species and 70 percent of land species.)


Fossil reveals oldest live birth   BBC - May 28, 2008
A fossil fish uncovered in Australia is the oldest-known example of a mother giving birth to live young, scientists have reported in the journal Nature. The 380 million-year-old specimen has been preserved with an embryo still attached by its umbilical cord. The find, reported in Nature, pushes back the emergence of this reproductive strategy by some 200 million years. Until now, scientists thought creatures from these times were only able to develop their young inside eggs. Before this find, the earliest evidence for this form of reproduction came from reptile fossils dating to the Mesozoic Era (248 to 65 million years ago) The team said the latest discovery had a remarkably advanced reproductive biology, similar to modern sharks and rays.