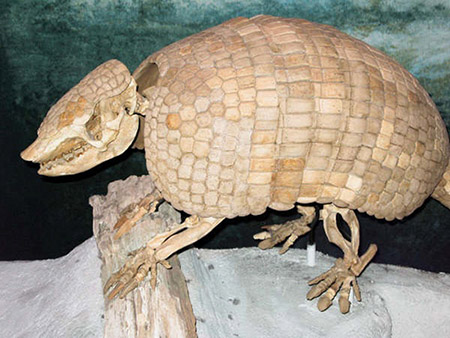 Armadillos are New World placental mammals with a leathery armour shell. Dasypodidae is the only surviving family in the order Cingulata, part of the superorder Xenarthra, along with the anteaters and sloths. The word armadillo means "little armoured one" in Spanish. The Aztecs called them ayotochtli Nahuatl for "turtle-rabbit".

Like all of the Xenarthra lineages, armadillos originated in South America. Due to the continent's former isolation, they were confined there for most of the Cenozoic. The recent formation of the Isthmus of Panama allowed a few members of the family to migrate northward into southern North America by the early Pleistocene, as part of the Great American Interchange. Today, all extant armadillo species are still present in South America. Read more


Monstrous fossils 'were armadillos', says DNA evidence   BBC - February 22, 2016
An extinct group of giant, armored animals with spiky, club-shaped tails belongs firmly within the family tree of modern armadillos, according to a study of 12,000-year-old DNA. The glyptodonts roamed South America for millions of years until the last Ice Age, and some grew as big as cars. Their physical attributes - notably an impenetrable shell - already placed them as likely cousins of armadillos. Now, researchers say they are not even a sister group, but a subfamily.