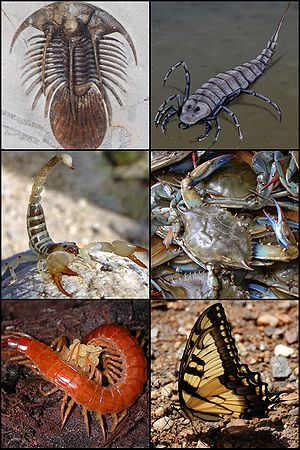 An arthropod is an invertebrate animal having an exoskeleton (external skeleton), a segmented body, and jointed appendages. Arthropods form the phylum Arthropoda, and include the insects, arachnids, myriapods, and crustaceans. It has been proposed that the Ediacaran animals Parvancorina and Spriggina, from around 555 Mya, were arthropods. Read more ... 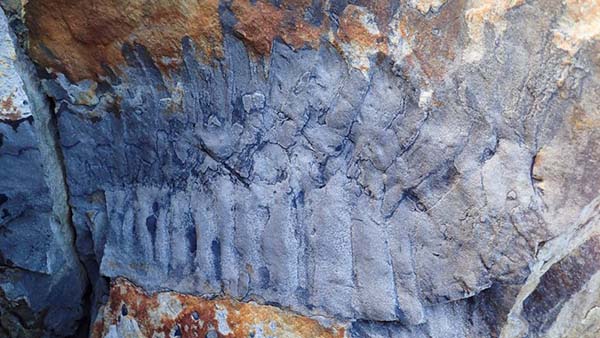 They were likely one of the biggest animals living on Earth at the time. Researchers in the U.K. have found the fossilized exoskeleton of the largest arthropod to have ever lived. These giant millipede-like creatures were the length of a car and likely roamed Earth during the Carboniferous Period, between 359 million and 299 million years ago. The monstrous millipede ancestors, known as Arthropleura, were already known to scientists, but the discovery of the new fossilized exoskeleton fragment confirms that these ancient invertebrates could grow to be much larger than previously expected. Researchers discovered the new Arthropleura fossil, which is around 326 million years old, inside a fragmented block of sandstone on a beach in Northumberland in northeast England in 2018. The exoskeleton fragment is 2.5 feet (75 centimeters) long and 1.8 feet (55 cm) wide. This means the individual that molted it would have been around 8.5 feet (2.6 meters) long and weighed around 110 pounds (50 kilograms), according to the researchers.


Ancient Sea Monster Was One of Largest Arthropods   Live Science - March 11, 2015
A remarkably well-preserved fossil of a 480-million-year-old seamonster is helping researchers understand the evolution of arthropods. The creature, an anomalocaridid, has not one but two sets of legs on each of its body segments, showing that it's an ancestor of modern-day arthropods, which include arachnids, insects and crustaceans. Despite its size, A. benmoulae was a gentle giant, said John Paterson, an associate professor of paleontology at the University of New England in Australia, who was not involved in the study.


Bacterial traces from 3.5 billion years ago are oldest fossils, experts say   Washington Post - December 31, 2012
Scientists analyzing Australian rocks have discovered traces of bacteria that lived a record-breaking 3.49 billion years ago, a mere billion years after Earth formed. If the find withstands the scrutiny that inevitably faces claims of fossils this old, it could move scientists one step closer to understanding the first chapters of life on Earth. The discovery could also spur the search for ancient life on other planets. These traces of bacteria are the oldest fossils ever described. Those are our oldest ancestors. Unlike dinosaur bones, the newly identified fossils are not petrified body parts. They're textures on the surfaces of sandstone thought to be sculpted by once-living organisms. Today, similar patterns decorate parts of Tunisia's coast, created by thick mats of bacteria that trap and glue together sand particles. Sand that is stuck to the land beneath the mats and thus protected from erosion can over time turn into rock that can long outlast the living organisms above it.


Ancient Anthropods Used Borrowed Homes   Live Science - August 23, 2009
Hermit crabs, a lineage some 200 million years old, may not have been the first to salvage mollusk shells for self-protection. Primitive arthropods were among the earliest animals to venture onto land - 500 million years ago - and they too recycled shells, according to new research. James W. Hagadorn of Amherst College in Massachusetts and Adolf Seilacher of Yale University analyzed Cambrian-period fossil tracks left on a sand flat by ancient arthropods in what is now central Wisconsin. The small imprints are in remarkably good shape: a microbial mat permeating the beach probably saved them from obliteration by waves. The tracks resemble those of present-day hermit crabs, complete with intermittent, off-center impressions - hallmarks of a borrowed shell touching the ground with each step. But the marks suggest that compared with hermit crabs, the ancient trekkers wore their shells upside down. So whereas hermit crabs' rear ends curl under toward their bellies, the early arthropods' tails must have curled upward, like scorpions'.