Earliest human footprints in Australia News in Science - December 21, 2005
At tens of thousands of years old the find is the largest group of human footprints from the Pleistocene era ever found. 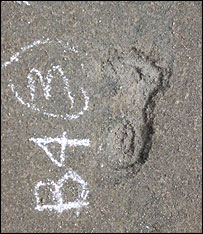 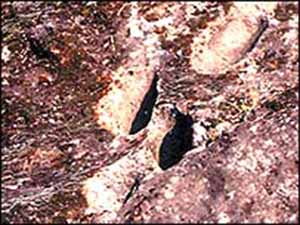 The oldest human footprints have been found in volcanic ash in Italy.

A young boy walking inside a cave 25,000 to 27,000 years ago left what French archaeologists believe may be the oldest human footprints in Europe.

Scientists studying the site said Thursday there was no way to precisely date the prints in the damp clay, but that carbon datings nearby in the cave strengthen their case.

"We have made an intellectual link - one that is very strong," said Jean-Pierre Daugas, an archaeologist and chief administrator for the cave. "Before the cave was discovered, it had been closed off for 20,000 years. Everything we have found near the footprints is older than that."

The cave, discovered five years ago by an amateur spelunker, contains 300 prehistoric wall paintings, considered the world's oldest. The radiocarbon datings of the paintings, as well as campfire remains, range from 23,000 to 32,000 years.

The footprints were discovered by a team of 15 scientists who joined those already studying the paintings in May. The markings, which measure 8.3 inches long, are thought to have been made by a boy 8 to 10 years old.

If the scientists are correct, the footprints are the oldest known in Europe, belonging to Cro-Magnon man - "people like you and me," Daugas said.

The Chauvet cave's walls are adorned with animals of the glacial era and the floors littered with campfires, flints and the bones of bears. 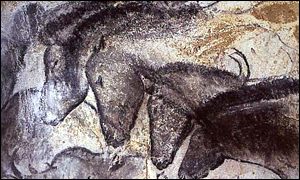 The valuable find also has been the subject of legal wrangling between the state and Jean-Claude Chauvet, who claims that as the cave's discoverer, he has rights to some of the future financial proceeds.

Revenue from the caves will come from photographs, postcards, posters and other memorabilia sold to visitors.

Scientists agree the cave could outclass the famous Lascaux caves, about 18,000 years old, which draw hundreds of thousands of tourists each year.

"The cave is extremely rich and will likely give us many more clues to exactly how these people lived," said Jean Clottes, the archaeologist who heads the team that discovered the footprints.