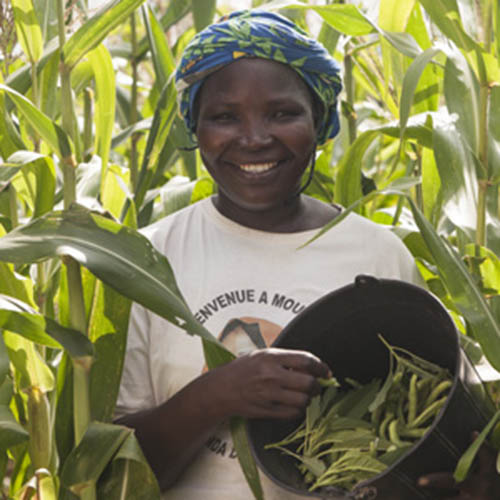 Millions of people have been affected by worst drought in decades in the US, Africa, southern Europe, and elsewhere. Numbers are likely to increase in future as climate change is expected to change rainfall patterns and produce more droughts. With global population approaching 8 billion by 2025, this will place a huge demand on governments and the environment to provide sufficient food. The challenge of building sustainable and resilient food systems requires innovative solutions.

Adopting ecological approaches can help build resilient food systems in achieving food security in a changing climate. This raises the question of how ecological-based approaches will impact food systems. Can they provide innovative solutions in addressing food shortages and how can they be consolidated and extended ? Closer attention to approaches that go beyond words into actions and guide policy practices are urgently needed. One of such approaches is ecosystem-based adaptation (EbA) which provides flexible, cost-effective, and broadly applicable alternatives for building robust food systems and reducing the impacts of climate change.


7 Ways Food Needs to Change   Live Science - March 11, 2013
Food. It's among the most fundamental of human needs. But, over time, it has also entered the realm of high-tech, intellectual property, big business and environmental and social justice concerns. All the while, the world's population of hungry mouths is growing. At a discussion on the future of food here at the American Museum of Natural History on Tuesday (March 5), a panel of experts grappled with the issues of how society produces and consumes food. Here are seven key points they addressed:


1. How much should food cost?

"Most would say the right not to be hungry is a basic human right, but it gets thorny when we try to explore what that means," said panelist Paul Root Wolpe, an ethicist at Emory University. (Discussion within the United Nations has focused on ensuring that all people are able to obtain food for themselves.) However, it's impossible to think about food without also thinking of trade, ownership and, in a capitalist society, profit, Wolpe said.

Meanwhile, plant geneticist Paul Gepts of the University of California, Davis, said the U.S. Department of Agriculture statistics show progressively smaller shares of Americans' income going to food, freeing them up to spend more money elsewhere. But that cheep food has consequences, he said. "What is the cost of producing food ever more cheaply?" Gepts said, noting that such costs came in the form of ecological damage and the exploitation of farm laborers. "I think food right now is artificially cheap," he said.

2. The need to feed a growing world.

World population is projected to hit 9 billion in 2050; meanwhile, as people become wealthier, their diets are changing. Recent experience shows production can be increased in two ways: By altering the genetics of crops and by using non-genetic strategies in farming, such as crop rotation, Gepts said, noting that these methods have received less interest from private companies. Farmers do not necessarily need to produce a higher overall tonnage of food, but food production in certain places, such as parts of Africa, needs to be improved, Wolpe said. If we could manage to triple the yield in the U.S., I don't think that would be an adequate solution. He noted that political and social problems also stand in the way of feeding the world's hungry.

"We are going to need more innovation right now. We can't continue the way it is going, Gepts said. Modern industrial agriculture relies on just a few types of crops with few varieties grown, in what is known as a monoculture. This system requires the use of pesticides and synthetic fertilizers, which take a lot of energy to manufacture. "We want to produce as much as possible, but with the least amount of impact on the world's ecosystems," Gepts said.

4. What's the reality behind fears of genetically modified food?

Genetic engineering, or transplanting a foreign gene directly into a crop's genome, has sparked fears of health and environmental havoc. However, the technique has little to do with the development of most new crop varieties, Gepts said. The old-fashioned technique of breeding plants is still very active, drawing on natural biodiversity, he said. "The benefits and the dangers of genetic modification are overhyped," he said, explaining that the practice focuses on one gene at a time, while many important traits, such as drought tolerance, depend on the influence of many genes within a plant.

5. Are patents necessary to spur the innovation we need?

Panel moderator Fred Kaufman, an economic journalist, noted that this issue is being tried in a case currently before the U.S. Supreme Court. A farmer is challenging the company Monsanto's right to prevent farmers from planting seeds from crops grown from its genetically modified soybeans. Kaufman cited Chief Justice John Roberts' question: Why would anyone spend the money to improve seed without the right to protect their invention going forward? Panelist Rochelle Dreyfuss, an intellectual property lawyer, said she would tell Roberts, "There are many different incentives to innovate." Society needs to create rules that balance the interests of those creating something new with those of the people who want to build on that invention to create the next version, Dreyfuss said.

6. Do we need "open source" in agriculture?

Often used in the field of computer software, "open source" innovations do not have patent protection and are available for others to draw upon in their own work. Some, though not all, plant breeders support the use of open source for innovations within agriculture, Gepts said. Adaptations of an open source innovation can be protected legally in a variety of ways, Dreyfuss said.

Wolpe recounted hearing food company executives talk about how, like everyone else, they suffered from diabetes and worried about what their kids ate But, "'when we reduce sugar in some of our products, people stop buying them,'" Wolpe reported the executives as saying. While much of the conversation focused on food production, Wolpe and other panelists noted that food consumption is the other half of the equation.