Secrets In A Seed: Clues Into The Evolution Of The First Flowers   Science Daily - October 28, 2009 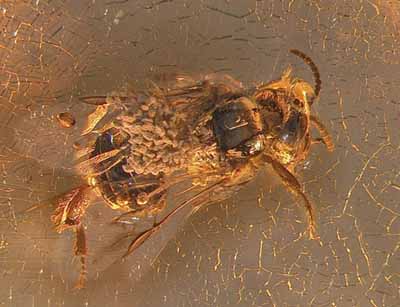 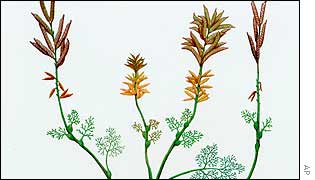 The ancestor of all the grains, fruits and blossoms of the modern world may have been a fragile water plant that lived in a Chinese lake approximately 125 million years ago. The plant, called Archaefructus sinensis for "ancient fruit from China," is of a species never before seen and carries the clear characteristics of the most primitive of flowering plants.

Botanists have discovered a stand of "living fossil" trees from a species that dates back to prehistoric times in the dense rainforests north of Sydney, authorities said Friday. About 20 mature trees found in the Nightcap Range about 400 miles north of Sydney bear nuts similar in structure to those discovered in fossilized form in 1875 by botanist Baron Ferdinand von Mueller. "It gives us another small paragraph or a page of the insight into the evolution of flowering plants and the incredible changes that have occurred on this continent through enormous periods of time," said botanist Peter Kooyman, who discovered the trees in August.

The exact location is being kept secret to protect the trees, state environment minister Bob Debus said. Kooyman sent details of his find to Sydney's Royal Botanic Gardens, which identified the trees as belonging to the Eidothea genus. "Eidothea were living fossils of the rainforests which once covered the ancient super-continent of Gondwanaland - now Australia, Africa, South America and New Zealand," Debus said.

The biggest of the newly discovered trees is at least 120 feet tall and has "beautiful, primitive and messy" flowers with a scent similar to aniseed, Kooyman said. A similar discovery was made in the Blue Mountains west of Sydney in 1994, when botanists discovered a stand of living fossil trees known as the Wollemi Pines.

Researchers think they have discovered fossil evidence of the world's oldest flower, at 142 million years: a spindly twig with peapod-shaped fruit and a woody stem that looks nothing like a rose, an apple blossom or a daisy. The fossil is from an early evolutionary stage when plants were just developing the flowering system that later evolved into fruit, grain, brilliantly colored and fragrant flowers and food for many animals, said David Dilcher, a University of Florida biology professor.

"It would have been a very different world if early flowering plants like this one had not been successful," said Dilcher, co-author of a study in Friday's edition of the journal Science. "There would have been no apples, no Wheaties in the morning, no corn on the cob, no potatoes, no rice or other grains." All of the common plant food sources came into existence after plants evolved the ability to make flowers that attracted insects and other pollinators and then grew into fruit.

The flowering plant fossil was found in a rock formation of limestone and volcanic ash layers in China, near the town of Beipiao, about 250 miles northeast of Beijing. The rock beds were once on the bottom of a lake that periodically was showered with volcanic ash, Dilcher said.

Plants and animals that sank to the lake bottom became covered with sediment and turned into fossils. Villagers digging in the fossil beds have unearthed dinosaurs, insects, birds and plants from millions of years ago, but this is the first time a flowering plant has been uncovered.

The discovery has been age-dated at 142 million years by Chinese scientists, Dilcher said. The oldest previously known flowering plant was about 130 million years old. Chinese researchers, including the researcher who found the fossil, asked Dilcher to analyze it. The ancient plant lacks the petals and shape that most people associate with flowers. "It doesn't have any beautiful or showy flowers, but it is a flowering plant because it has fruit that enclose seeds," said Dilcher.

Botanists hailed the discovery as an important advance in understanding how plants evolved. "To the world of botany, it's a discovery of the same scale as understanding the details of why the dinosaurs became extinct," said William L. Crepet, a Cornell University professor.

The plant specimen is about three inches long, with two parts that appear to be joined branches. Along the branches are what appear to be paired leaves. But Dilcher said the whole thing, branches and leaves, is actually a flower. That is because some of the leaves are closed, like peapods, and contain seeds. The peapods are considered the fruit of the flower, he said. Indeed, the plant "may have been the first evolutionary experiment in enclosing seeds and trying to attract pollinators," Dilcher said.

Plants first developed seeds some 350 million years ago. Developing flowers and attracting insect pollinators was the next great leap in plant evolution, and eventually in animal evolution, he said.

"Flowering plants were the first advertisers in the world," said Dilcher. "They managed to gain the cooperation of animals by learning to say 'Hey, I smell good. I've got a reward for you. Come and visit me. Plants reached the stage of having bright blossoms, sweet fragrance and flowing nectar about 55 million years ago, some 90 million years after the Chinese flower fossil."