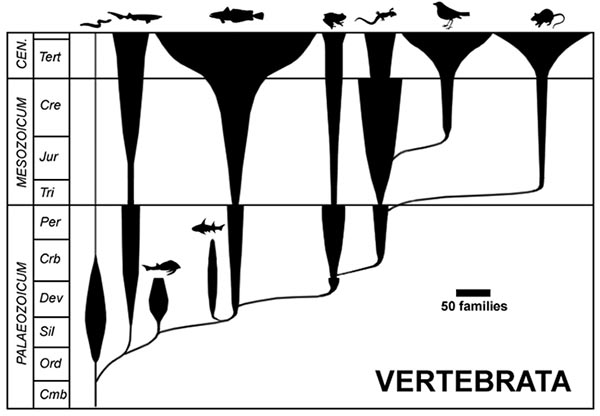 Vertebrates originated about 525 million years ago during the Cambrian explosion, which saw the rise in organism diversity. The earliest known vertebrate is believed to be the Myllokunmingia. Another early vertebrate is Haikouichthys ercaicunensis. Unlike the other fauna that dominated the Cambrian, these groups had the basic vertebrate body plan: a notochord, rudimentary vertebrae, and a well-defined head and tail. All of these early vertebrates lacked jaws in the common sense and relied on filter feeding close to the seabed. A vertebrate group of uncertain phylogeny, small-eel-like conodonts, are known from microfossils of their paired tooth segments from the late Cambrian to the end of the Triassic.

The first jawed vertebrates appeared in the latest Ordovician and became common in the Devonian, often known as the "Age of Fishes". The two groups of bony fishes, the actinopterygii and sarcopterygii, evolved and became common. The Devonian also saw the demise of virtually all jawless fishes, save for lampreys and hagfish, as well as the Placodermi, a group of armoured fish that dominated much of the late Silurian. The Devonian also saw the rise of the first labyrinthodonts, which was a transitional form between fishes and amphibians. Read more ...


Remarkable Fossil Sea Creature -- 525 Million Years Old -- Shows Soft Parts of Body Including Tentacles   Science Daily - March 29, 2011
The 525-million-year-old fossil belongs to a group of tentacle-bearing creatures which lived inside hard tubes. Previously only the tubes have been seen in detail but this new specimen clearly shows the soft parts of the body including tentacles for feeding. Details of the discovery have just been announced in the journal Current Biology. The creature belongs to a group called pterobranch hemichordates which are related to starfish and sea urchins but also show some characteristics that offer clues to the evolution of the earliest vertebrates. About 30 species of pterobranch are known to exist today although 380-490 million years ago a group of these animals called graptolites were common across the prehistoric oceans.

Fossil tracks record 'oldest land-walkers'   BBC - January 6, 2010
The oldest evidence of four-legged animals walking on land has been discovered in southeast Poland. Rocks from a disused quarry record the "footprints" of unknown creatures that lived about 397 million years ago. Scientists tell the journal Nature that the fossil trackways even retain the impressions left by the "toes" on the animals' feet.


Australia: Sheep farmer finds oldest vertebrate fossil BBC - October 24, 2003
A sheep farmer in Australia has discovered a fossil of the world's oldest vertebrate - the common ancestor of all animals with a backbone. Sheep station owner Ross Fargher found the fossil among a number of strange shapes embedded in sandstone slabs on his farm. But after taking it home, he left it on his veranda for four years before scientists identified its importance. At 560 million years old, the fossil is around 30 million years older than the next oldest vertebrate remains found so far, in China. The fossil was about six centimetres long, with a head shield and a top dorsal crest. There was also a possibility it had once had a fin. He said that the creature "gave rise to everything that has some kind of stiffening rod or backbone". The group is collectively known as chordates - vertebrates are only one type of chordates, defined by the fact that their backbone is mineralized.