Early Use of Fire 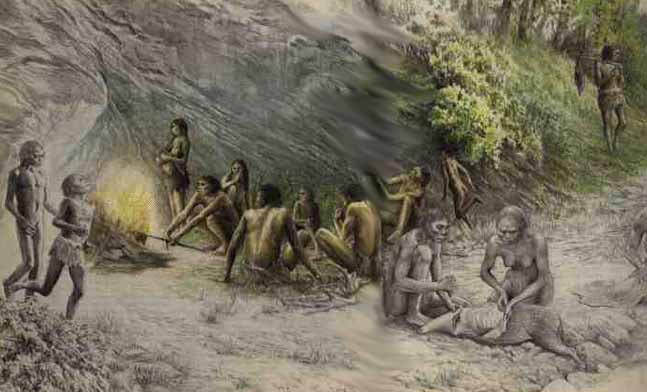 The control of fire by early humans was a turning point in the cultural aspect of human evolution that allowed humans to cook food and obtain warmth and protection. Making fire also allowed the expansion of human activity into the dark and colder hours of the night, and provided protection from predators and insects. Evidence of widespread control of fire dates to approximately 125,000 years ago and later. Evidence for the controlled use of fire by Homo erectus beginning some 400,000 years ago has wide scholarly support, with claims regarding earlier evidence finding increasing scientific support. Claims for the earliest definitive evidence of control of fire by a member of Homo range from 0.2 to 1.7 million years ago (Mya). Read more ...


300,000-Year-Old Caveman 'Campfire' Found   Live Science - January 27, 2014
A newly discovered hearth full of ash and charred bone in a cave in modern-day Israel hints that early humans sat around fires as early as 300,000 years ago - before Homo sapiens arose in Africa. In and around the hearth, archaeologists say they also found bits of stone tools that were likely used for butchering and cutting animals. The finds could shed light on a turning point in the development of culture "in which humans first began to regularly use fire both for cooking meat and as a focal point - a sort of campfire - for social gatherings.


Archaeologists claim objects are earliest 'matches'   BBC - August 8, 2012
Researchers from Israel say that mysterious clay and stone artifacts from Neolithic times could be the earliest known "matches". Although the cylindrical objects have been known about for some time, they had previously been interpreted as "cultic" phallic symbols. The researchers' new interpretation means these could be the earliest evidence of how fires were ignited.


4,000-year study supports use of prescribed burns in Southern Appalachians   PhysOrg - April 6, 2010
A new study reconstructing thousands of years of fire history in the southern Appalachians supports the use of prescribed fire, or controlled burns, as a tool to reduce the risk of wildfires, restore and maintain forest health and protect rare ecological communities in the region's forests. Duke University researchers used radiocarbon analysis of 82 soil charcoal samples dating from 1977 to more than 4,000 years ago to reconstruct the fire history of a 25-acre site in the Nantahala National Forest in western North Carolina. These are the first hard data showing that fires have occurred relatively frequently over much of the last 4,000 years and have played an important role in the health, composition and structure of southern Appalachian forest ecosystems


Fossils reveal oldest wildfire   BBC - April 27, 2004
Scientists have discovered evidence for the earliest known wildfire in Earth's history, the journal Geology reports. It comes in the form of small plant fossils preserved as charcoal, which were unearthed by researchers near the town of Ludlow on the Welsh borders. The plant remains date to the Silurian Period, about 443 to 417 million years ago, say a Cardiff University team. Previously, charcoal was known only from the later Devonian Period, which saw an explosion in plant diversity. But in the Silurian, plants were generally quite small, which would have restricted the fuel source for wildfires.


Bones hint at first use of fire   BBC - March 22, 2004
Human-like species living in Africa up to 1.5 million years ago may have known how to control fire, scientists say. US and South African experts analyzed burnt bones from Swartkrans, just north of Johannesburg, using the technique of electron spin resonance. It showed the bones had been heated to high temperatures usually only achieved in hearths, possibly making it the first evidence of fire use by humans.