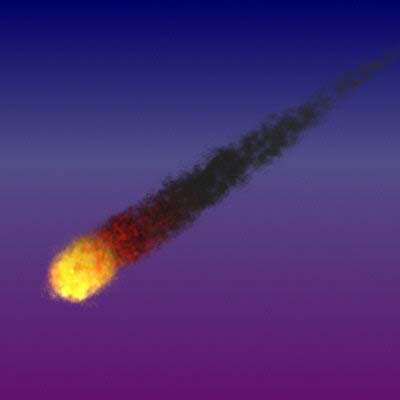 A fireball is a brighter-than-usual meteor. The International Astronomical Union defines a fireball as "a meteor brighter than any of the planets" (magnitude -4 or greater). The International Meteor Organization (an amateur organization that studies meteors) has a more rigid definition. It defines a fireball as a meteor that would have a magnitude of -3 or brighter if seen at zenith.

This definition corrects for the greater distance between an observer and a meteor near the horizon. For example, a meteor of magnitude -1 at 5 degrees above the horizon would be classified as a fireball because if the observer had been directly below the meteor it would have appeared as magnitude -6.

For 2013 there were 3556 fireballs recorded at the American Meteor Society. There are probably more than 500,000 fireballs a year,[ but most will go unnoticed because most will occur over the ocean and half will occur during the daytime. Fireballs reaching magnitude -14 or brighter are called bolides. The IAU has no official definition of "bolide", and generally considers the term synonymous with "fireball". Astronomers often use "bolide" to identify an exceptionally bright fireball, particularly one that explodes (sometimes called a detonating fireball). It may also be used to mean a fireball which creates audible sounds. In the late twentieth century, bolide has also come to mean any object that hits the Earth and explodes, with no regard to its composition (asteroid or comet).