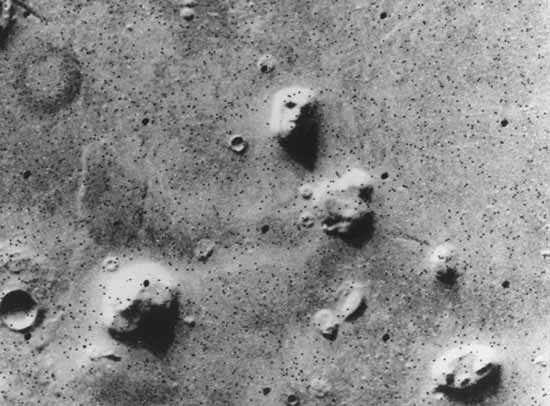 The face on Mars is actually a rock formation not created by aliens.

Part of the Cydonia region, taken by the Viking 1 orbiter and released by NASA/JPL on July 25, 1976 (north is to the upper right). The famous 'Face on Mars' is near the center at the top. I call this a form of divination or rock scrying -- looking at any object, and giving it meaning because it looks like something one can relate to. It's fun to do with clouds.

Some researchers believe the Face on Mars is aligned with the Sphinx on the Giza plateau, each having a giant pyramid nearby, though a pyramid on Mars is speculation. This theory goes along with an alien-human connection that allegedly linked Mars and Earth in the past. Keep an open mind, but doubtful. They say the geometry of the Face on Mars and its pyramid, (part of an ancient city complex), align with the Sphinx and Great Pyramid on Earth. The Pyramid and it's two adjacent pyramids, further align with the belt stars of Orion ... tales from Orion which goes to Osiris and Isis, and all the mythology of death and rebirth.

Richard C. Hoagland, among others, believe the "Face" to be evidence of a long-lost Martian civilization along with other features they believe are present, such as apparent pyramids, which they argue are part of a ruined city. 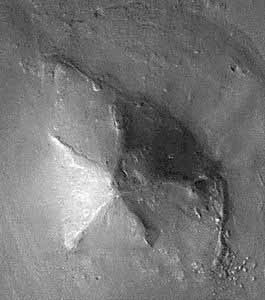 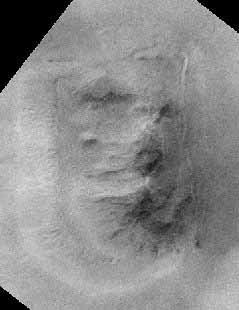 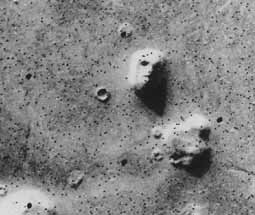 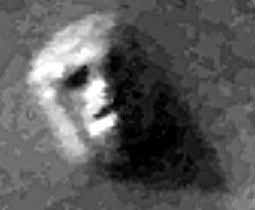 Image analysis of the original Viking images led a few researchers to suggest that the features of the "Face" might not be an accidental consequence of viewing conditions. While accepting the "Face" as a subject for scientific study, astronomer Carl Sagan criticized much of the speculation concerning it in an eponymous chapter of his book The Demon-Haunted World.

In one of the images taken by Viking 1 on July 25, 1976, a 2 km (1.2 miles) long Cydonian mesa, situated at 40.75° north latitude and 9.46° west longitude, had the appearance of a humanoid "Face on Mars". When the image was originally acquired, Viking chief scientist Gerry Soffen dismissed the "face" in image 35A72 as a "trick of light and shadow".

However, a second image, 70A13, also shows the "Face", and was acquired 35 Viking orbits later at a different sun-angle from the 35A72 image. This latter discovery was made independently by Vincent DiPietro and Gregory Molenaar, two computer engineers at NASA's Goddard Space Flight Center. DiPietro and Molenaar discovered the two misfiled images, Viking frames 35A72 and 70A13, while searching through NASA archives.

Cydonia was first imaged in detail by the Viking 1 and Viking 2 orbiters. Eighteen images of the Cydonia region were taken by the orbiters, of which seven have resolutions better than 250 m/pixel (820 ft/pixel). The other eleven images have resolutions worse than 550 m/pixel (1800 ft/pixel) and are virtually useless for studying surface features.

More than 20 years after the Viking 1 images were taken, a succession of spacecraft visited Mars and collected new data from the Cydonia region. These spacecraft have included NASA's Mars Global Surveyor (1997-2006) and Mars Reconnaissance Orbiter (2006-), and the European Space Agency's Mars Express probe (2003-).

In contrast to the relatively low resolution of the Viking images of Cydonia, these new platforms afford much improved resolution. For instance, the Mars Express images are at a resolution of 14 m/pixel (46 ft/pixel) or better. By combining data from the High Resolution Stereo Camera (HRSC) on the Mars Express probe and the Mars Orbiter Camera (MOC) on board NASA's Mars Global Surveyor it has been possible to create a 3D representation of the "Face on Mars".

Today, the "Face" is generally accepted to be an optical illusion, an example of pareidolia. After analysis of the higher resolution Mars Global Surveyor data NASA stated that "a detailed analysis of multiple images of this feature reveals a natural looking Martian hill whose illusory face-like appearance depends on the viewing angle and angle of illumination". Similar optical illusions can be found in the geology of Earth; examples include the Old Man of the Mountain, the Pedra da Gavea, the Old Man of Hoy and the Badlands Guardian. 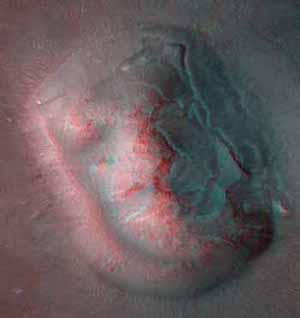 
Martian Face Turns Out to be a Rocky Mesa   PhysOrg - August 2, 2010
Technology has advanced a considerable amount since the original photo was taken, though. Now NASA has released a new image of the area - one that shows quite clearly that what looks like a face in the 1976 image is really just a rocky mesa.


New Visage for Red Planet 'Face'   BBC - September 22, 2006
The Mars Express probe has photographed the classic surface feature on the Red Planet's surface known as "The Face". The mountain, which looks just like a human head with eyes, mouth and nostrils, was first pictured by the US Viking 1 Orbiter in 1976. The formation instantly became the stuff of myth and conspiracy theories, with some claiming it was evidence of an ancient Martian civilization.