An extrasolar planet is a planet which orbits a star other than the Sun, i.e. which belongs to a planetary system other than our solar system. Extrasolar planets were discovered during the 1990s as a result of improved telescope technology, such as CCD and computer-based image processing along with the Hubble Space Telescope.

Such advances allowed for more accurate measurements of stellar motion, allowing astronomers to detect planets, not visually (the luminosity of a planet being too low for such detection), but by measuring gravitational influences upon stars. In addition, extrasolar planets can be detected by measuring the variance in a star's apparent luminosity, as a planet passes in front of it. Besides the detection of at least 80 planets (mostly gas giants), many observations point to the existence of millions of comets also in extrasolar systems. 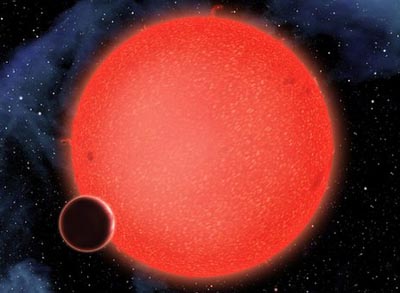 
GJ 1214b is one of the most interesting exoplanets yet detected. Astronomers have confirmed the existence of a new class of planet: a waterworld with a thick, steamy atmosphere. Exoplanet GJ 1214b is a so-called "Super Earth" - bigger than our planet, but smaller than gas giants such as Jupiter.

Observations using the Hubble telescope now seem to confirm that a large fraction of its mass is water. The planet's high temperatures suggest exotic materials might exist there. The planet was discovered in 2009 by ground-based telescopes. It is about 2.7 times the Earth's diameter, but weighs almost seven times as much. It orbits its red-dwarf star at a distance of just two million km, meaning temperatures on GJ 1214b probably reach above 200C.

In 2010, astronomers released measurements of its atmosphere. These suggested that GJ 1214b's atmosphere was probably made up of water, but there was another possibility - that the planet was covered in a haze, of the type that envelopes Saturn's moon Titan.

Mr Berta and his colleagues used the Hubble Space Telescope's wide-field camera to study the planet as it crossed in front of its star - a transit. During these transits, the star's light is filtered through the planet's atmosphere, giving clues to the mixture of gases present.

The researchers said their results are more consistent with a dense atmosphere of water vapour, than one with a haze. Calculations of the planet's density also suggest that GJ 1214b has more water than Earth. This means the internal structure of this world would be very different to that of our own. "The high temperatures and pressures would form exotic materials like 'hot ice' or 'superfluid water', substances that are completely alien to our everyday experience," said Dr Berta.

The planet's short distance from Earth makes it a likely candidate for follow-up observations with the James Webb Space Telescope, which may launch by the end of this decade.