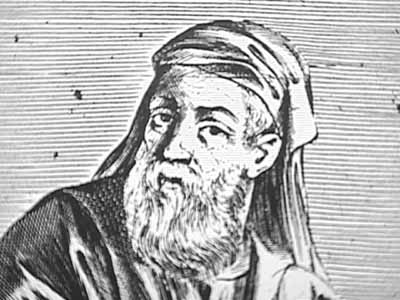 Empedocles (c. 490 BC Ŵ c. 430 BC) was a Greek presocratic philosopher and a citizen of Agrigentum, a Greek colony in Sicily.He maintained that all matter is made up of four Elements (which he called roots): water, earth, air and fire. In addition to these, he postulated something called Love (philia) to explain the attraction of different forms of matter, and of something called Strife (neikos) to account for their separation. He was also one of the first people to state the theory that light travels at a finite (although very large) speed, a theory that gained acceptance only much later.

Though having much in common with Heraclitus' ontology, Empedocles is considered to be more tolerant and soft in his outlook. That fact served as a matter of mentioning him by Plato in the famous "Sophist" dialogue as a "gentle muse".

Empedocles was also a mystic and a poet, and some consider him the inventor of the study of rhetoric. Gorgias of Leontini was his student, and it is probably from Empedocles that Gorgias developed the notion of rhetoric as magic.

As a person he was somewhat arrogant, dressing himself in purple and claiming that by the virtue of the knowledge he possessed he had become divine and could perform miracles. Yet his actions and teaching betrayed an egalitarian streak, he fought to preserve Greek democracy and allowed that through his teaching others could also become divine. He even went so far to suggest that all living things were on the same spiritual plane, indicating he was influenced by Pythagorean spirituality.

Like Pythagoras, he believed in the transmigration of souls between humans and animals and followed a vegetarian lifestyle.

Empedocles is considered the last Greek philosopher to write in verse and the surviving fragments of his teaching are from his two poems, Purifications and On Nature.

His life was recored by Diogenes Laertius.

The legend goes that he died by throwing himself into an active volcano (Mount Etna in Sicily), so that people would believe his body had vanished and he had turned into an immortal god; however, the volcano threw back one of his bronze sandals, revealing the deceit. (There is, however, some evidence that he actually died in Greece.)

In Icaro-Menippus, a comedic dialogue written by the second century satirist Lucian of Samosata, Empedocles' final fate is revaluated. Rather than being incinerated in the fires of Mount Etna, he was carried up into the heavens by a volcanic eruption. Though a bit singed by the ordeal he survives and continues his life on the moon, surviving by feeding on dew.

Empedocles is the subject of Friedrich Hlderlin's play Tod des Empedokles (Death of Empedocles), two versions of which were written between the years 1798 and 1800. A third version was made public in 1826.

In Matthew Arnold's poem "Empedocles on Etna", dramatising the philosopher's last hours before he jumps to his death in the crater, Empedocles predicts:

To the elements it came from

Our bodies to earth,

Our blood to water,

Anthony Gottlieb, The Dream of Reason: A History of Philosophy from the Greeks to the Renaissance, 2001