Empathy is one's ability to recognize, perceive and directly feel the emotion of another person. As the states of mind, beliefs, and desires of others are intertwined with their emotions, one with empathy for another may often be able to more effectively divine another's modes of thought and mood. Empathy is often characterized as the ability to "put oneself into another's shoes", or experiencing the outlook or emotions of another being within oneself, a sort of emotional resonance.In fiction, especially science fiction or fantasy works, it may also refer to (or be associated with) a supernatural ability to read others' emotions through psychic means.

An example of this are the Betazoids of Star Trek. 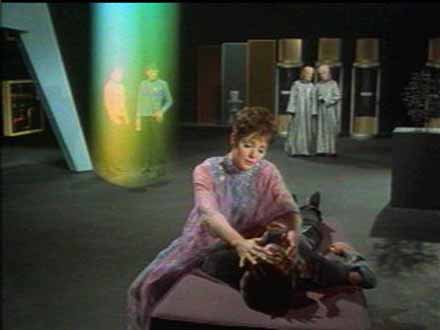 Most psychics have empathic abilities, either developed through time and experience, or inherent from childhood.

Human capacity to recognize the emotions of another is related to one's imitative capacities, and seems to be grounded in one's innate capacity to associate the bodily movements and facial expressions one sees in another with the proprioceptive feelings of one's corresponding movements or expressions.

Humans also seem to make the same immediate connection between the tone of voice, and body language of another and one's inner feeling. Hence, by looking at the facial expressions or bodily movements of another, or by hearing another's tone of voice, one may be able to get an immediate sense of how another seems to feel on the inside. One experiences this as anything in a range, from understanding, to directly experiencing, or to feeling another's emotion (say, sadness or anger), rather than just noting the behavioral symptoms of another's emotion. But clinicians must take care not to over-invest their own emotions at the risk of draining away their own resourcefulness; thus awareness of one's own limitations is prudent in a clinical situation, as in caregiving.

More fully developed empathy requires more than simply recognizing another's emotional state. Since emotions are typically directed towards objects or states of affairs (either real or imaginary), the empathiser first requires some idea of what that object might be.

Next, the empathiser must determine how the emotional feeling will significantly affect the way in which he perceives the other person. The empathizer needs to determine the aspects of the person upon which to focus.

When seeking to communicate with another, it may be helpful to demonstrate empathy with the other, to open-up the channel of communication with the other. In this case two methods of simulating empathy are possible:

a) either simulate the pretend beliefs, desires, character traits and context of the other and see what emotional feelings this leads to;

b) or simulate the emotional feeling directly perceived and then look around for a suitable reason for this to fit. Either way, full empathetic engagement is supposed to help to understand and anticipate the behavior of the other.

Empathy may be painful to oneself: seeing the pain of others, especially as broadcasted by mass media, can cause one temporary or permanent clinical depression; a phenomenon which is sometimes called weltschmerz.

One must be careful not to confuse empathy with either sympathy, emotional contagion or telepathy. Sympathy is the feeling of compassion for another, the wish to see them better or happier, often described as "feeling sorry" for someone. Emotional contagion is when a person (especially a child or a person in a mob) identifies with strong emotions others are showing and becomes subject to the same emotions themselves. Telepathy is a controversial paranormal phenomenon, which differs in that empathy is based not upon the paranormal but upon sophisticated processing of what is seen and heard in the usual way.

Some experts (psychologists, psychiatrists, and other scientists) believe that not all humans have an ability to feel empathy or perceive the emotions of others. For instance, Autism and related conditions such as Asperger's syndrome are often (but not always) characterized by an apparent reduced ability to empathize with others. The interaction between empathy and autism spectrum disorders is a complex and ongoing field of research, and is discussed in detail below.

According to Simon Baron-Cohen's ideas, this absence might be related to an absence of theory of mind (i.e., the ability to model another's world view using either a theory-like analogy between oneself and others, or the ability to simulate pretend mental states and then apply the consequences of these simulations to others). Again, not all autistics fit this pattern, and the theory remains controversial.

In contrast, psychopaths are seemingly able to demonstrate the appearance of sensing the emotions of others with such a theory of mind, often demonstrating care and friendship in a convincing manner, and can use this ability to charm or manipulate, but they crucially lack the sympathy or compassion that empathy often leads to. Empathy certainly does not guarantee benevolence. The same ability may underlie schadenfreude (taking pleasure in the pain of another entity) and sadism (being sexually gratified through the infliction of pain or humiliation on another person).

Developing skills of empathy is often a central theme in the recovery process for drug addicts.

Even more, people can empathize with animals. As such, empathy is thought to be a driving psychological force behind the animal rights movement (an example of sympathy), whether or not using empathy is justified by any real similarity between the emotional experiences of animals and humans.

A common source of confusion in analyzing the interactions between empathy and ASD is that the apparent lack of empathy may mask at least two other underlying causes:

A higher level of empathy is sometimes reported by individuals with mild or high functioning Asperger's syndrome, especially to animals and to other deeply held emotions in people - anecdotally this may more often be so with "high-functioning" individuals, or possibly, the strength of negative empathic feelings with people might itself have been a contributing cause of retreat into self.

Some students of animal behavior claim that empathy is not restricted to humans as the definition implies. Examples include dolphins saving humans from drowning or from shark attacks, and a multitude of behaviors observed in primates, both in captivity and in the wild. Rodents have been shown to demonstrate empathy for cage-mates (but not strangers) in pain.

Research in recent years has focused on possible brain processes as concomitant with empathy.Functional imaging has recently been employed to investigate the functional anatomy of empathy: Farrow et al found that empathic judgments activated left superior frontal gyrus, orbitofrontal gyrus, precuneus, left anterior middle temporal gyrus and inferior frontal gyrus. Components of this circuit may be dysfunctional in psychopathy (Tunstall N., Fahy T. and McGuire P. in: Guide to Neuroimaging in Psychiatry, Eds. Fu C et al, Martin Dunitz: London 2003). Furthermore, the discovery of mirror neurons in monkeys that fire both when the creature watches another perform an action as well as when they themselves perform it presents a possible neural mechanism for mapping others' feelings onto one's own nervous system.

In Bower (2005) the function of these mirror cells was further investigated. They may be related to awareness of the goal-directedness of actions. These neurons "may be responsible for understanding the intention of action in other people," Kiyoshi Nakahara and Yasushi Miyashita, both of the University of Tokyo School of Medicine said in a note which accompanies the Bower action.

Dapretto et al. (2006) found that, as opposed to normally developing children, high-functioning children with autism showed no mirror neuron activity in the brain's inferior frontal gyrus (pars opercularis) while imitating and observing emotional expressions. The authors suggest this supports the hypothesis that a dysfunctional mirror neuron system may underlie the social deficits observed in autism.

By the age of 2, children normally begin to display the fundamental behaviors of empathy by having an emotional response that corresponds with another person. Sometimes, toddlers will comfort others or show concern for them as early as 24 months of age. Also during the second year, toddlers will play games of falsehood or "pretend" in an effort to fool others, and this requires that the child know what others believe before he or she can manipulate those beliefs.

In addition to the above use, the term empathy is also used by some people to signify their heightened or higher sensitivity to the emotions and state of others. This, reportedly, can lead to both positive aspects such as a more skilled instinct for what is "behind the scenes" with people, but also to difficulties such as rapid over-stimulation, overwhelm or stress caused by an inability to protect oneself from this so-called 'pick-up'. Such people may for example find crowds stressful simply due to picking up what is often described as "white noise" or multiple emotions as they pass through it, a phenomenon not to be confused with agoraphobia and sometimes informally known as crowd-sickness.

Empathy in this sense is ascribed by such people to various mechanisms. These include simply more sophisticated subconscious processing of sensory cues or stronger emotional feedback than the norm, (i.e. the normal human experience but more so), and therefore fit within present models. Some people, perhaps due to synesthesia, believe it instead to be a direct emotional sense or a feel for others' "energy".

The New Age religion has constructed a belief system around anecdotal evidence of persons who claim to be "empaths" in this sense. This aspect of empathy is not clinically recognized, and someone calling themselves an "empath" usually does not intend to imply that they are gifted with any psychic ability.

A recurrent theme of discussion on such websites relates to the impact upon individuals, and therefore also methods (including mental practices, emotional processes and ritual) which anecdotally can help reduce the intensity of empathic reactions to others' feelings to a more bearable level (informally called 'shielding' or emotional detachment).

The empathic process is exploited to a certain extent in all kinds of fiction, thus we may identify deeply with characters appearing in books, plays or films (see especially Currie 2004).

In some works of science fiction and fantasy, empathy is understood to be a paranormal or psychic ability to sense the emotions of others, as opposed to telepathy, which allows one to perceive thoughts as well. A person who has that ability is also called an "empath" or "telempath" in this context.