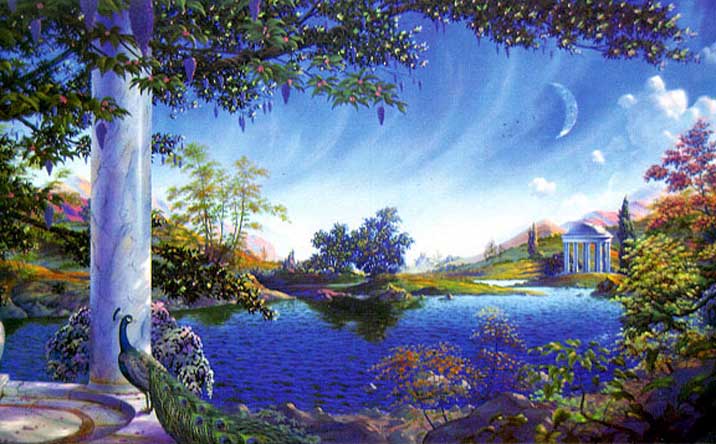 In Greek mythology, Elysium was a section of the Underworld (the spelling Elysium is a Latinization of the Greek word Elysion). "Elysium is an obscure and mysterious name that evolved from a designation of a place or person struck by lightning, enelysion, enelysios.

The Elysian fields were the final resting place of the souls of the heroic and the virtuous. Two passages in Homer established for Greeks the nature of the Afterlife: the dreamed apparition of the dead Patroclus in the Iliad and the more daring boundary-breaking visit in Odyssey. Greek traditions concerning funerary ritual were reticent, but the Homeric examples encouraged other heroic visits, in the myth cycles accreted upon Theseus and upon Heracles.

The Elysian Fields lay on the western margin of the Earth, by the encircling stream of Oceanus (Odyssey), and there the mortal relatives of the king of the gods were transported, without tasting death, to enjoy an immortality of bliss (Odyssey book iv: 563). Hesiod refers to the Isles of the Blessed in the Western Ocean (Works and Days).

Pindar makes it a single Isle. Walter Burkert notes the connection with the motif of far-off Dilmun: "Thus Achilles is transported to the White Isle and becomes the Ruler of the Black Sea, and Diomedes becomes the divine lord of an Adriatic island."

In Elysium were fields of the pale liliaceous asphodel, and poplars grew. There stood the gates that led to the house of Ais (in Attic dialect "Hades").

Among the poets to interpret Elysium is Virgil, who describes an encounter there between Aeneas and his father Anchises. Virgil's Elysium knows perpetual spring and shady groves, with its own sun and lit by its own stars solemque suum, sua sidera norunt (Aeneid book vi:541).

In Paris, the Champs-Elysees retain their name of the Elysian Fields, first applied in the late 16th century to a formerly rural outlier beyond the formal parterre gardens behind the royal French palace of the Tuileries.

After the Renaissance, as popular poets became less influenced by reading Greek and Latin literature, and images of Valhalla entered the popular European imagination, an even cheerier Elysium evolved for some poets. Sometimes it is imagined as a place where heroes have continued their interests from their lives. Others suppose it is a location filled with feasting, sport, song; Joy is the "daughter of Elysium" in Friedrich Schiller's Ode to Joy.

Dante had a very different idea of the Elysian Fields - he described them as the very upper level of hell, a place of peace that the unbaptized and the non-believers who lived virtuous lives go. It is a place of happiness, but it is closed off from God and thus remains as hell.

Many Neopagans today, particularly Hellenic neopagans in the United States, have what most would consider a new-age view of Elysium. Elysium is seen as a multi-layered paradise, or Heaven, to many modern neopagans. Some believe that the outer layer of Elysium is composed of great and beautiful fields, often envisioned in imaginative descriptions as having green glowing blades of grass and bubbling springs of glowing water and wine, often made from the nectar of Ambrosia. Beyond the fields of Elysium, reserved only for the most righteous and virtuous, is the Golden City where spirits exist in a state of constant euphoria. Whether or not such beliefs are based in actual mythology often seems rather unimportant to many neopagans. Most claim that old myths are simply mortal accounts and interpretations of the divine, but the same could be argued about any current beliefs regarding Elysium. Much of what many modern neopagans believe today regarding Elysium seems to be borrowed from popular Christian imagery of Heaven.