The music of Egypt has been an integral part of Egyptian culture since ancient times. The ancient Egyptians credited one of their gods Hathor with the invention of music, which Osiris in turn used as part of his effort to civilize the world. 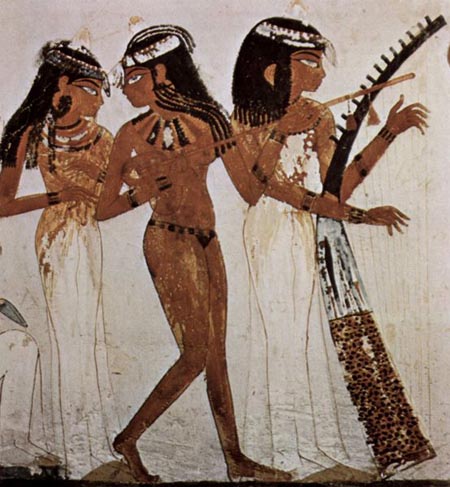 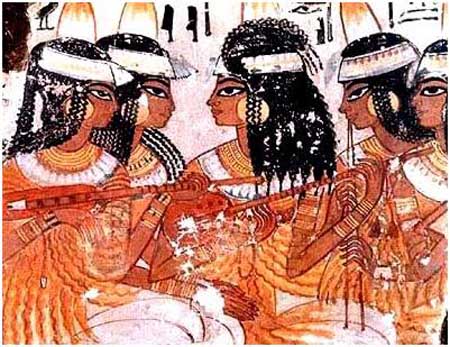 Cymbals frequently accompanied music and dance, much as they still do in Egypt today. Egyptian folk music, including the traditional Sufi dhikr rituals, are the closest contemporary music genre to ancient Egyptian music, having preserved many of its features, rhythms and instruments, and instruments that looked like recorders and clarinets. In general, modern Egyptian music blends these indigenous traditions with Turkish, Arabic, and Western elements. Arabic music is usually said to have begun in the 7th century in Syria during the Umayyad dynasty.

Since the Nasser era, Egyptian pop music has become increasingly important in Egyptian culture, particularly among the large youth population of Egypt. Egyptian folk music continues to be played during weddings and other traditional festivities. In the last quarter of the 20th century, Egyptian music was a way to communicate social and class issues. Among some of the most popular Egyptian pop singers today are Mohamed Mounir and Amr Diab.

Religious music remains an essential part of traditional Muslim and Coptic celebrations called mulids. Mulids are held in Egypt to celebrate the saint of a particular church. Muslim mulids are related to the Sufi zikr ritual. The Egyptian flute, called the ney, is commonly played at mulids. The liturgical music of the Coptic Church also constitutes an important element of Egyptian music and is said to have preserved many features of ancient Egyptian music.

Dancing played a vital role in the lives of the ancient Egyptians. All social classes were exposed to music and dancing. The laborers worked in rhythmic motion to the sounds of songs and percussion, and street dancers entertained passers by.

Ancient Egyptian society celebrated life to the fullest with festivals and other occasions to honor their gods and goddesses. They styles varied, some of which are emulated today. Dance troupes were accessible to perform at dinner parties, banquets, lodging houses, and even religious temples. Some women from wealthy harems were trained in music and dance. They danced for royalty accompanied by female musicians playing on guitars, lyres and harps. However, no well-bred Egyptian would dance in public, because that was the privilege of the lower classes. Wealthy Egyptians kept slaves to entertain at their banquets, and present pleasant diversion to their owners.

At the end of the fourth century BC there were acrobatic dances and pair dances. Men and women were seen dancing with clappers (wooden castanets). She also added that dancers of that era used a short curved stick or cane while dancing which is a prop still used by modern Egyptian dancers.

Ancient Egyptian Dancers danced either as soloists, in pairs or in groups depending on the occasion and type of the dance performed. In solo dances, the king performed the sun dance. Priests designated as the kings representatives performed solo dances or led religious dances. At the harvest festival, the king or his representative danced in honor of Min, a god of fertility.

In pair dancing, it was either two males or females performing their dance as a kind of entertainment. It was noted in the 5th dynasty that girls held hands while performing unison symmetrical and dramatic movements to express emotions as longing or depression whereas in the 6th dynasty girls danced with canes.

There were two types of Egyptian group dances. One was performed in individual movements that confirmed a theme or idea or was carried out spontaneously as in prehistoric times. Dancers competed with one another, often in groups, substituting movement that were later established in funeral dances rites. In the second group style, pairs or ranks of dancers executed repetitive movements in a circle. Trained pair dancers often performed at banquets and festivals.

In the Old Kingdom female dancers wore short men's skirts or danced naked wearing just a belt around their waist. Some dancers wore long or short transparent garments sometimes completely revealing the right side of their chests. Whereas in the Middle and New kingdoms dancers wore transparent broad long cloaks with tight or loose sleeves. Dancers adorned themselves in brightly decorated collars, bracelets, earrings, and ribbons or garlands on their heads. The dancers also wore cones made of fragranced semi solid fat, used to give out a pleasant perfume as the dancers performed.

The Old and Middle Kingdom women's hair dress was characterized by evenly cut and smoothly combed down, divided into two thinner plaits hanging from the shoulders down to the chest and one broad plait covering the upper part of the back. Female dancers who did not have long hair resorted to wearing wigs styled in the same fashion. The Egyptian male dancers in both the old and middle kingdoms wore the regular men's dress viz. skirt or an apron with round edges in the front. The dancers of the dwarf dances wore a crown made of reeds or palm fibers woven into the shape of white upper Egyptian crown. For ornaments male dancers wore collars adorned with ties, they also wore chains around their necks, whereas the younger boys wore bracelets on their feet.

The ancient Egyptians used a vast array of musical instruments such as harps, lutes, drums, flutes, cymbals, clappers and tambourines that played a prominent role in melodic compositions of ancient Egyptians composers and musicians. Only musicians directly associated with the dancers are those clapping their hands, using clappers or playing tambourines, drums, sistrums or other percussion instrument to beat out tempo and rhythm. It was rare to find wind or stringed instrument players close to dancers in the same scene. However, it was noted that whenever musicians are depicted, dancers were not generally far away.

They included three types of dances: ritual, postures and gestures and secular dances. During the old kingdom, just after the mummification process was completed, dances were performed by a specialized group of ladies known as the acacia house.

At Beni Hasan, Middle kingdom tomb, there are scenes depicting dancers following the funerary procession and performing acrobats. Another group of funerary dances were the mww (muu) - dancers, known from the old kingdom through the New Kingdom.

These dancers wore kilts and reed crowns and dances performed when the funeral procession reached the tomb, to symbolically ferry the dead across the waters leading to the netherworld. Dancing dwarfs were known from the old kingdom and were prized for their rarity. They used to dance at the entrance of the shaft.

The dances they performed were farewell performances associated with the departure of the sun. The dwarfs were used as they were thought to represent the sun due to their stunted growth. Another kind of funeral dance was seen during the Middle and New kingdoms in celebration of the coming of the goddess Hathor (the lady of drunkenness) whose responsibility was to help the deceased enter the underworld, and was the main force behind their rebirth; so an appeal was recited or sung using percussion instruments and the clapping of hands and sticks.

Banquet scenes represented in New Kingdom tombs combined the ritual and domestic sides of a family feast, where music and dancing took place to help people forget how short their lives were. After the new Kingdom changes of tomb decoration took place funerary dances were no longer depicted on tomb walls but were found in temples instead. The dancing scenes portrayed in temples reflected both royal and divine ceremonies. All dancing scenes had one common feature that being the solemn procession of the sacred barks carrying a god.

SedĐfestival: dances took place during jubilee ceremonies which celebrated the renewal pledge to the king. Such dances varied in accordance to the religious significance and the reflection of the local mythology of the God to whom they were directed.

Valley festival: at Thebes celebrates the God Amun's trip from Karnak temple to visit the tombs on the West Bank passing by the sanctuary of Hathor. As the procession moved from one place to another, families rejoiced and danced.

Opet Feast: another event associated with God Amun's visit to his wife Goddess Mut from Karnak Temple to Luxor temple. This procession was marked by groups of women doing acrobatic dances together with dark dancers, probably Nubians who jumped and merged with the drums.

Feast of Min: god of fertility and regeneration: The dancers in this feast were members of his cult. Drawings representing this feast showed priests and monkeys dancing. These drawings could have had a symbolic meaning rather than an actual representation of reality.

Nile Flood Feast: (The New Year celebration): Dancing played a vital role in this festivity as it helped transform the dangerous Sekhmet into the mild Hathor, thereby protecting the ancient land from Sekhmet's evil and deadly demons. These dances included all possible forms of movement including acrobats and exotic foreign dances.

Dance dramas provided religious education for young Egyptians the most significant one the Osiris fertility rite which was performed both inside and outside of the temple. It portrayed the God's adventures through mimetic dances.