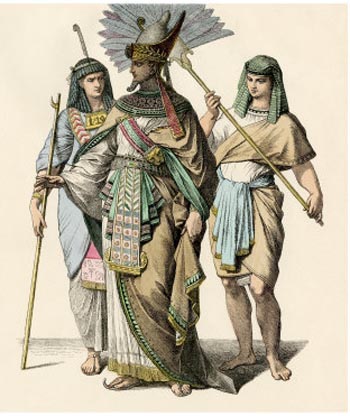 The judicial system was not a separate entity from the ancient Egyptian government. Egyptians did not have professional judges. In fact there was no word for judge in the Egyptian language. Even though no book of laws from ancient Egypt have been found, court records show that Egyptian law was usually based on a common-sense approach. In fact Egyptian law encouraged reaching agreements to resolve conflicts rather than sticking to a complicated set of laws.

The New Kingdom had a council of elders called kenbet. They were responsible for court cases involving small claims and minor disputes. The elders were from regional governments and priests whose official rank in the temples entitled them to be judges. The ancient Egyptian judicial system also had a ØGreat KenbetÆ which the vizier or pharaoh chaired and the members were high-ranking officials. Usually more serious cases involving murder, major land transactions and tomb robbery were heard at this court. Plaintiffs and defendants represented themselves and much like today, swore an oath that they told the truth. Egyptian women were also allowed to seek justice, and like men could have their day in court.

The ancient Egyptians viewed men and women, including people from all social classes except slaves, as essentially equal under the law, and even the lowliest peasant was entitled to petition the vizier and his court for redress. Both men and women had the right to own and sell property, make contracts, marry and divorce, receive inheritance, and pursue legal disputes in court. Married couples could own property jointly and protect themselves from divorce by agreeing to marriage contracts, which stipulated the financial obligations of the husband to his wife and children should the marriage end.

The head of the legal system was officially the pharaoh, who was responsible for enacting laws, delivering justice, and maintaining law and order, a concept the ancient Egyptians referred to as Ma'at. Although no legal codes from ancient Egypt survive, court documents show that Egyptian law was based on a common-sense view of right and wrong that emphasized reaching agreements and resolving conflicts rather than strictly adhering to a complicated set of statutes. Local councils of elders, known as Kenbet in the New Kingdom, were responsible for ruling in court cases involving small claims and minor disputes.

More serious cases involving murder, major land transactions, and tomb robbery were referred to the Great Kenbet, over which the vizier or pharaoh presided. Plaintiffs and defendants were expected to represent themselves and were required to swear an oath that they had told the truth. In some cases, the state took on both the role of prosecutor and judge, and it could torture the accused with beatings to obtain a confession and the names of any co-conspirators. Whether the charges were trivial or serious, court scribes documented the complaint, testimony, and verdict of the case for future reference.

Punishment for minor crimes involved either imposition of fines, beatings, facial mutilation, or exile, depending on the severity of the offense. Serious crimes such as murder and tomb robbery were punished by execution, carried out by decapitation, drowning, or impaling the criminal on a stake. Punishment could also be extended to the criminal's family. Beginning in the New Kingdom, oracles played a major role in the legal system, dispensing justice in both civil and criminal cases. The procedure was to ask the god a "yes" or "no" question concerning the right or wrong of an issue. The god, carried by a number of priests, rendered judgment by choosing one or the other, moving forward or backward, or pointing to one of the answers written on a piece of papyrus or an ostracon.