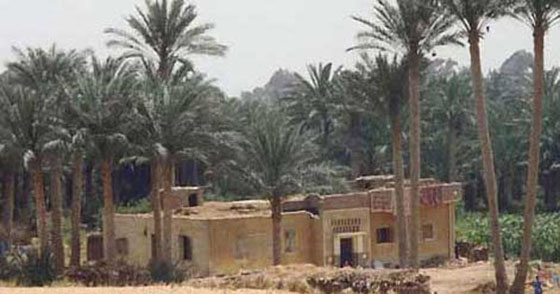 As in all civilizations, the poor people lived in cramped quarters often as small as one room were an entire family lived out their lives. The wealthier the family the better the living conditions, not unlike today's world.

Villagers, tomb builders, and farmers lived in cramped villages with narrow streets near the tombs sites or farmlands. The houses they occupied were made of bricks and had no foundations. The bricks were made of mud and chopped straw, molded and dried in the hot Egyptian sun. These dwellings deteriorated after time, and new ones were built right on top of the crumbled material, creating hills called tells. Eventually this gave way to stone buildings.

Houses built close to the edge of the river where water was accessible, were a major problem each year at the time of the Inundation of the Nile - mud brick houses often washed away, leaving little or no remains. A new building had to be constructed on top of the old site where new mudbricks were applied.

The homes themselves were square in shape, with a vent on the roof and narrow windows. Flat roofs and were designed to either keep the heat of summer out, and protect from the cold winter nights. People often slept, cooked, and ate atop their houses flat roofs. The front space of the house was used by the villager for his trade and possibly for keeping some livestock. The living area was shared by the family. There was little furniture save beds and small chests for keeping clothes. The kitchen was at the back of the house where there might be a a small underground root cellar for storage. There was no running water and sometimes a single well served an entire town. In those years, Egyptian villagers spent most of their time out of doors.

Moving to towns or cities, the houses of the common people were usually two to three stories high and built close together. The upper floors were for living while the ground floor often housed a business. Roofs were flat and in the hot period, they were used as a sleeping place. Cooking was often done on the roof too, as a cooking fire would not be safe indoors.

There was limited furniture. A low, square stool, the corners of which flared upwards and on top was placed a leather seat or cushion, was the most common type of furnishing. Chairs were rare and they only belonged to the very wealthy. Small tables were made of wood or wicker and had three to four legs. Beds were made of a woven mat placed on wooden framework standing on animal-shaped legs. At one end was a footboard and at the other was a headrest made a curved neckpiece set on top of a short pillar on an oblong base. Lamp stands held lamps of simple bowls of pottery containing oil and a wick. Chests were used to store domestic possessions such as linens, clothing, jewelry, and make-up.

Water taken from the river or canals often caused health problems - epidemics a common part of life. Used water from baths or toilets was disposed of either in the river, the street, or in pits, adding to the unsanitary conditions. 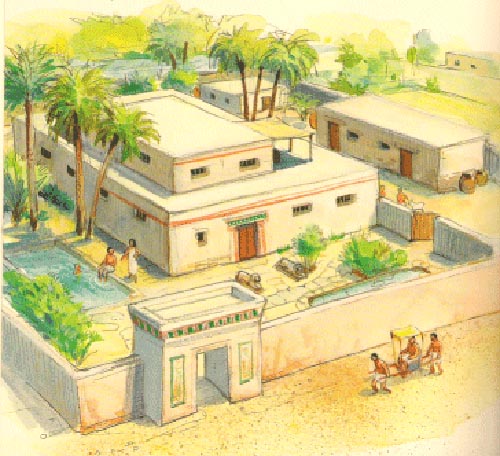 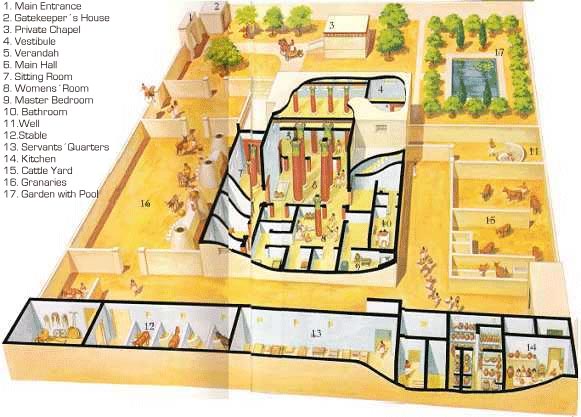 
Wealthy Egyptians had spacious estates with comfortable houses. The houses had high ceilings with pillars, barred windows, tiled floors, painted walls, and stair cases leading up to the flat roofs where one could overlook the estate. There would be pools and gardens, servant's quarters, wells, granaries, stables, and a small shrine for worship. The wealthy lived in the countryside or on the outskirts of a town. Homes were arranged around an inner courtyard or on one side of a corridor. There would be reception rooms and private quarters. The entrance was set in the wall facing the street and the windows were set high up in the walls of the upper story. They would be covered with shutters or mats to keep out heat, dust and insects.

Exterior walls, as well as the columns and piers, were covered with hieroglyphic and pictorial carvings in brilliant colors. Many motifs of Egyptian ornament are symbolic, such as the scarab, the solar disk, and the vulture. Other common motifs include palm leaves, the papyrus plant, and the buds and flowers of the lotus. Hieroglyphics were decoration as well as records of historic events.

Homes often had a bathroom with a toilet, which could be either a toilet stool with a hole in it, or a seat made of limestone. A room set aside for a bath had a slab of stone in a corner for standing on or lying on while a servant doused them with water. Often the walls here were covered with stone, as the packed earth which often was used for floors, would be unsuitable in a bathroom. The used water ran off into a bowl which was either emptied by hand, or there were holes at its bottom, though which the water drained slowly into the ground.