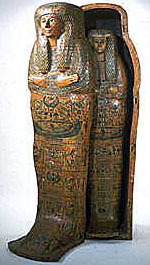 Uadjet's original home and chief cult center was in the Delta marshes. As her sister Nekhebet was the motherly protectress of the pharoah, so Uadjet was his aggressive defender. When Isis was hiding in the swamps with her baby Horus, Uadjet came to help her protect him.

In art, Uadjet appeared as a cobra, sometimes winged and crowned, and sometimes as a snake with the face of a woman. She was the uraeus (cobra-shaped symbol of sovereignty) that appeared on the headdresses of the Egyptian pharaohs. She figured prominently in the coronation ceremony and in the underworld, where she endowed justice and truth and destroyed the enemies of the deceased. Uadjet was the goddess of the fifth hour of the fifth day of the moon.