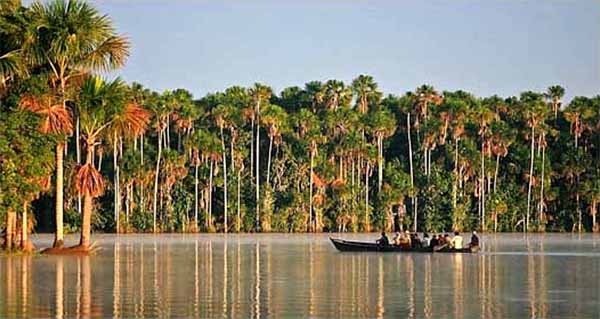 Peru has 84 of the 103 existing ecosystems and 28 of the 32 climates on the planet, making the country the most ecologically diverse in the world. Peru also hosts the most diversity of birds, mammals, butterflies, and the Tambopata and Manu regions possess two of the most diverse flora and fauna forests in the world.

Home to the origin of the mighty Amazon River, the rainforests of Peru are some of the most important in the world, with high concentrations of biodiversity and large intact areas remaining. Ranking only behind Russia, Canada, and Brazil in the size of its frontier forests, Peru has more than 133 million acres of old growth rainforest, representing 57 percent of the countryës original forest cover.

Peru is home to approximately 1,750 bird species, 13,000 plant species, and one-quarter of South Americaës mammal species. In many parts of the Peruvian Amazon there are between 150 and 300 species of trees within less than three acres of rainforest. It is believed that the area around the Pongo de Mainique Canyon on the Urubamba River contains more biodiversity than any other similar-sized area on Earth.

Unfortunately, the vast majority of the Amazon in Peru is threatened. Since the rubber boom of the early 20th century, countless Peruvian politicians have made extracting natural resources from the Amazon a priority. Current causes of deforestation in Peru include logging, oil extraction, chemical spraying and clearing of vegetation to eradicate coca plants, and colonization leading to the conversion of pristine forest into farms and pastures. Over-hunting also threatens the region's biodiversity.

In many cases, the traditional territories of the Peruvian Amazon's indigenous peoples have been lost to the encroachment of the Western world. In the Madre de Dios region in the southern Amazon, a gold rush that has been active since the 1970s and huge logging concessions are pushing the cultures of the Mashco-Piros, Amahuaca, Yaminahuas, and Yora tribes to the brink of extinction.