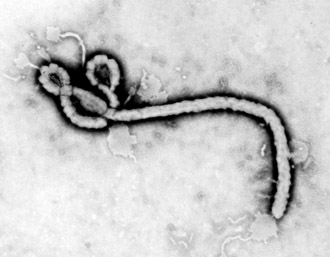 Ebola virus disease (EVD) (or Ebola hemorrhagic fever (EHF)) is the name for the human disease which may be caused by any of four of the five known ebolaviruses. Ebola virus (EBOV) causes severe disease in humans and in nonhuman primates in the form of viral hemorrhagic fever. EBOV is a select agent, World Health Organization Risk Group 4 Pathogen (requiring Biosafety Level 4-equivalent containment), National Institutes of Health/National Institute of Allergy and Infectious Diseases Category A Priority Pathogen, Centers for Disease Control and Prevention Category A Bioterrorism Agent, and listed as a Biological Agent for Export Control by the Australia Group. Continue reading ...


The species Lloviu cuevavirus is the taxonomic home of a virus that forms filamentous virion, Lloviu virus (LLOV). The species is included in the genus Cuevavirus. LLOV is a distant relative of the commonly known Ebola virus and Marburg virus. Continue reading

Lloviu virus - a close relative of Ebola - is a possible new pandemic threat and has been isolated for the first time   Medical Express - May 10, 2022


New Ebola Outbreak Suggests The Virus Might Lurk For Years Inside People   Science Alert - March 17, 2021
With the outbreak currently consisting of 14 confirmed cases and four suspected, the World Health Organization is employing a range of protective and tracing measures to contain the virus's spread. Suspicions over the source of the cluster have so far focused on a 51-year-old nurse who died at the end of January, having sought help from both medical facilities and a traditional healer after a bout of high fever, vomiting, weakness, and diarrhea.


Ebola lingers in semen for nine months   BBC - October 14, 2015
Ebola persists in the semen of male survivors much longer than previously thought, a study shows. The report in the New England Journal of Medicine found two-thirds of men had Ebola in their semen up to six months after infection, and a quarter after nine. A separate study, in the same journal, reports Ebola being spread through sex with a survivor six months after their symptoms had started.


Ebola outbreak: Virus mutating, scientists warn   BBC - January 29, 2015
Scientists tracking the Ebola outbreak in Guinea say the virus has mutated. Researchers at the Institut Pasteur in France, which first identified the outbreak last March, are investigating whether it could have become more contagious. More than 22,000 people have been infected with Ebola and 8,795 have died in Guinea, Sierra Leone and Liberia.


Ebola 'Patient Zero': How Outbreak Started from Single Child   Live Science - October 30, 2014
When Ebola virus came for the first time to a small village in Guinea, the victim was a toddler, who later became known to the world as Patient Zero. He died on Dec. 6, 2013, at age 2, and the domino effect of his illness has spiraled into the outbreak currently ravaging three nations in West Africa. His name was Emile Ouamouno. Emile's 3-year-old sister, his mother and his grandmother all died by January, leaving his father behind.