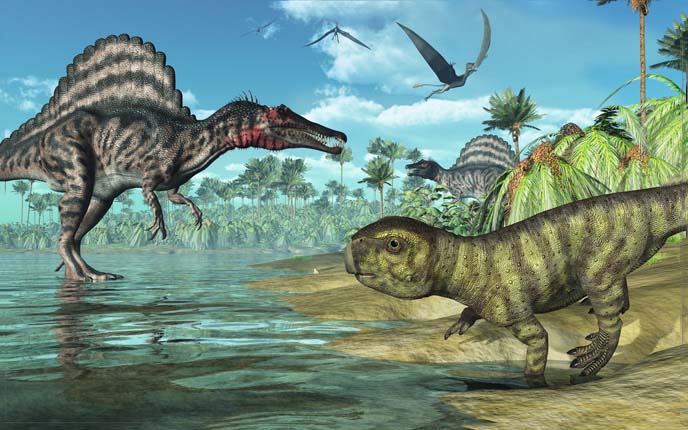 Mammals are a clade of endothermic amniotes distinguished from reptiles and birds by the possession of hair,a three middle ear bones, mammary glands, and a neocortex (a region of the brain). The mammalian brain regulates body temperature and the circulatory system, including the four-chambered heart. The mammals include the largest animals on the planet, the rorquals and some other whales, as well as some of the most intelligent, such as elephants, some primates and some cetaceans. The basic body type is a four-legged land-borne animal, but some mammals are adapted for life at sea, in the air, in the trees, or on two legs. The largest group of mammals, the placentals, have a placenta which feeds the offspring during pregnancy. Mammals range in size from the 30-40 mm (1.2-1.6 in) bumblebee bat to the 33-meter (108 ft) blue whale.

The word "mammal" is modern, from the scientific name Mammalia coined by Carl Linnaeus in 1758, derived from the Latin mamma ("teat, pap"). All female mammals nurse their young with milk, which is secreted from special glands, the mammary glands. According to Mammal Species of the World, 5,416 species were known in 2006. These were grouped in 1,229 genera, 153 families and 29 orders.

In 2008 the IUCN completed a five-year, 1,700-scientist Global Mammal Assessment for its IUCN Red List, which counted 5,488 accepted species at the end of that period. In some classifications, the mammals are divided into two subclasses (not counting fossils): the Prototheria (order of Monotremata) and the Theria, the latter composed of the infraclasses Metatheria and Eutheria. The marsupials constitute the crown group of the Metatheria and therefore include all living metatherians as well as many extinct ones; the placentals likewise constitute the crown group of the Eutheria. Read more ...

'Monstrous' new Russian saber-tooth fossils clarify early evolution of mammal lineage   PhysOrg - June 8, 2018
Fossils representing two new species of saber-toothed prehistoric predators have been described by researchers. These new species improve the scientists' understanding of an important interval in the early evolution of mammals - a time, between mass extinctions, when the roles of certain carnivores changed drastically. Living mammals are descended from a group of animals called therapsids, a diverse assemblage of "protomammals" that dominated terrestrial ecosystems in the Permian Period (~299-252 million years ago), millions of years before the earliest dinosaurs. These protomammals included tusked herbivores, burrowing insectivores, and saber-toothed predators. The vast majority of Permian therapsids have been found in the Karoo Basin of South Africa, and as a result, the South African record has played an outsized role influencing scientists' understanding of protomammal evolution. Because of this, therapsid fossils from outside of South Africa are extremely important, allowing scientists to discern whether observed events in the protomammal fossil record represent global or merely regional patterns.


Earliest-known arboreal and subterranean ancestral mammals discovered   Science Daily - February 12, 2015
The fossils of two interrelated ancestral mammals, newly discovered in China, suggest that the wide-ranging ecological diversity of modern mammals had a precedent more than 160 million years ago. With claws for climbing and teeth adapted for a tree sap diet, Agilodocodon scansorius is the earliest-known tree-dwelling mammaliaform (long-extinct relatives of modern mammals). The other fossil, Docofossor brachydactylus, is the earliest-known subterranean mammaliaform, possessing multiple adaptations similar to African golden moles such as shovel-like paws. Docofossor also has distinct skeletal features that resemble patterns shaped by genes identified in living mammals, suggesting these genetic mechanisms operated long before the rise of modern mammals.


Jaw-Dropping Find: Ancient Mammal's Ear Bones   Live Science - April 13, 2011
What defines a mammal? Well, to some researchers it's a few tiny ear bones. The fossil, called Liaoconodon hui, is a member of an early group of prehistoric mammals called the triconodonts, defined by their dental structures. It lived about 120 million years ago, during the Cretaceous Period.


Earliest Known Ancestor of Placental Mammals Discovered   National Geographic - April 24, 2002
Researchers today announced the discovery of the earliest known ancestor of the group of mammals that give birth to live young. The finding is based on a well-preserved fossil of a tiny, hairy 125-million-year-old shrewlike species that scurried about in bushes and the low branches of trees. The fossil of the animal, named Eomaia scansoria, was found in the fossil-rich region of Liaoning Province in China, which has also produced ancient evidence of feathered dinosaurs and primitive birds. Eomaia, which means "ancient mother" in Greek, was five inches (14 centimeters) long and weighed no more than 0.9 ounces (25 grams). There are three groups of mammals alive today: placentals, which give birth to young that are nourished in the mother's womb; marsupials, such as kangaroos, which give birth to premature and helpless embryos that climb into the mother's pouch, where they continue to develop; and monotremes, which lay eggs. Most mammals today are placentals. Mammalian diversity was not so simple 125 million years ago.


Fossil sheds light on early mammals   BBC - April 24, 2002
A mouse-like fossil found in north-eastern China has been identified as the earliest known member of the family of mammals whose descendants include humans. The small, furry creature lived at the same time that dinosaurs ruled the surface of the Earth, 125 million years ago. The fossil was found in Liaoning Province. It belongs to the family of mammals known as "eutherians" or "placentals", which means its young would have developed in a placenta in the female's uterus. The Chinese fossil represents the earliest known ancestor of all placentals, including our own group of mammals, the primates.