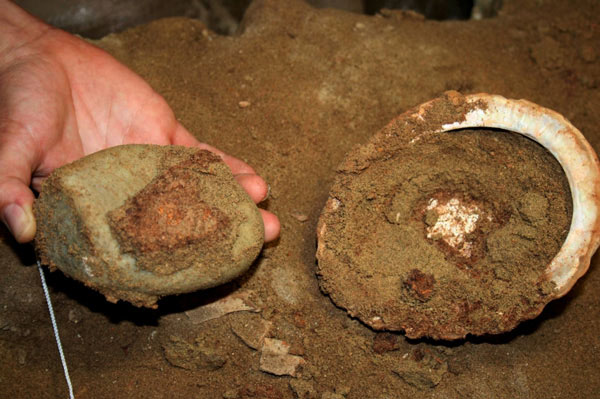 3300 BC - Tribes in Southern Europe started tattooing their skin.

3100 BC - Among many ceremonial items found in the five thousand year old Egyptian tombs, few are thought to be palettes that were used for grinding of cosmetic ingredients.

3000 BC - Chinese start painting their fingernails with colors extracted from natural sources.

1500 BC - Cosmetic products became commonplace in Egypt. They were used by everyone except lowest class of citizens and slaves. Aristocracy embraces fashion of ŇwhiteÓ skin, face mascara and dark eyeliners. Priest integrated sacred oils into their religious and ŇmagicÓ ceremonies.

1500 BC - In the Far East, fashionable Japanese started painting their skin in white with rice powder.

1000 BC - Egyptian tradition of public bathhouses spawns the development of various medicinal and cosmetic oils, soaps and pastes. Greek aristocracy starts using cosmetic products (face powder, red lipstick) to visually distance themselves from the rest of the population.

600 BC - Babylon becomes the biggest perfume trader of the ancient world.

189 BC - Roman Empire female's becomes totally enchanted with expensive foreign cosmetics, to the point when Senate managed to bring the law that totally forbids its use. This law was active for only 6 years, before it was quickly repelled after enormous riches were brought into Rome from the sacked Carthage.

100 BC - Christian females decided not to use too much cosmetics, which started the belief of future Catholic Church that cosmetic products are items of heretics and devil worshipers, especially red lipsticks.

200 to 1000 AD - Cosmetic products almost disappear from the Europe. Catholic Church openly discouraged their use, promoting their Ňreligious and medicinal threatsÓ.

936-1013 - Arab physician, surgeon and chemist Abulcasis (also known as Ňfather of the modern surgeryÓ) invented solid lipsticks, which could be applied to the lips without the need for paintbrush.

1000 - Cosmetic products slowly become to spread across the Europe. Their use is still discouraged, but lower classes of population (especially prostitutes and feminine males) continue to use them in the next 800 years.

1500s - Court of English Queen Elizabeth I popularized the fashion of stark white faces and painted lips. Sadly, their white paint contained toxic ingredients that could cause serious illnesses.

1892 - Fashion magazine Vogue launched in the US.

1904 - Max Factor established in Los Angeles, it specializes in the production of film actor cosmetics.


The history of cosmetics spans at least 6000 years of human history, and almost every society on earth. Some argue that cosmetic body art was the earliest form of ritual in human culture, dating over 100,000 years ago from the African Middle Stone Age. The evidence for this comes in the form of utilized red mineral pigments (red ochre) including crayons associated with the emergence of Homo sapiens in Africa.

Archaeological evidence of cosmetics certainly dates from ancient Egypt and Greece. According to one source, early major developments include the use of castor oil in ancient Egypt as a protective balm and skin creams made of beeswax, olive oil, and rosewater described by the Romans. The Ancient Greeks also used cosmetics.

Cosmetics are mentioned in the Old Testament - 2 Kings 9:30 where Jezebel painted her eyelids - approximately 840 BC - and the book of Esther describes various beauty treatments as well. Cosmetics were also used in ancient Rome, although much of Roman literature suggests that it was frowned upon. It is known that some women in ancient Rome used various substances, including lead-based formulas, to whiten the skin, and kohl was used to line the eyes. Read more ...


Scientists claim to have the first persuasive evidence that Neanderthals wore "body paint" 50,000 years ago. The team report in Proceedings of the National Academy of Sciences (PNAS) that shells containing pigment residues were Neanderthal make-up containers.

Scientists unearthed the shells at two archaeological sites in the Murcia province of southern Spain. The team says its find buries "the view of Neanderthals as half-wits" and shows they were capable of symbolic thinking. Black sticks of the pigment manganese, which may have been used as body paint by Neanderthals, have previously been discovered in Africa. "[But] this is the first secure evidence for their use of cosmetics," he told BBC News. "The use of these complex recipes is new. It's more than body painting."

The scientists found lumps of a yellow pigment, that they say was possibly used as a foundation. They also found red powder mixed up with flecks of a reflective brilliant black mineral. Some of the sculpted, brightly colored shells may also have been worn by Neanderthals as jewelry. Until now it had been thought by many researchers that only modern humans wore make-up for decoration and ritual purposes.

There was a time in the Upper Paleolithic period when Neanderthals and humans may have co-existed. But Professor Zilhao explained that the findings were dated at 10,000 years before this "contact". "To me, it's the smoking gun that kills the argument once and for all. The association of these findings with Neanderthals is rock-solid and people have to draw the associations and bury this view of Neanderthals as half-wits."