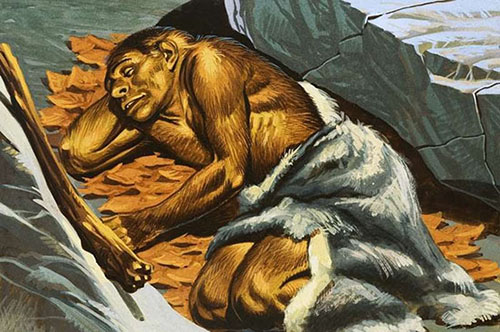 Around 3400 BC Egyptian pharaohs had their beds moved off the ground and slept on a raised surface. Roman Empire mattresses were stuffed with wool, feather, reeds or hay. The beds were decorated with paint, bronze, silver, jewels and gold. During the Renaissance, mattresses were stuffed with straw and feathers and then covered with silks, velvets or satin material. The arrival of the 18th century brought bed frames made from cast iron, and mattresses that were made of cotton. The 19th century saw the invention of the bed spring, also called the box spring. The 20th century brought the inner spring mattress, futon, water bed (starting in the 1960s), air mattresses, foam rubber mattresses and pillows. Read more ...


Oldest Known Mattresses Found; Slept Whole Family   National Geographic - December 8, 2011
The world's oldest known mattresses have been unearthed in South Africa, archaeologists have announced. The mattresses - which consist of layers of reeds and rushes - were discovered at the bottom of a pile of compacted grasses and other leafy plants. The bedding had accumulated at the Sibudu Cave site in KwaZulu-Natal (map) over a period of 39,000 years, with the oldest mats dating to 77,000 years ago.


World's Oldest Bedding Discovered in Cave   Live Science - December 8, 2011
The oldest known bedding - sleeping mats made of mosquito-repellant evergreens that are about 77,000 years old - has been discovered in a South African cave. This use of medicinal plants, along with other artifacts at the cave, helps reveal how creative these early peoples were, researchers said. An international team of archaeologists discovered the stack of ancient beds at Sibudu, a cave in a sandstone cliff in South Africa. They consist of compacted stems and leaves of sedges, rushes and grasses stacked in at least 15 layers within a chunk of sediment 10 feet (3 meters) thick.