The Thirtieth Dynasty of ancient Egypt followed Nectanebo I's deposition of Nefaarud II, the son of Hakor. This dynasty is often considered part of the Late Period.

Nectanebo I had gained control of all of Egypt by November of 380 BC, but spent much of his reign defending his kingdom from Persian reconquest with the occasional help of Sparta or Athens. In 365, Nectanebo made his son Teos co-king and heir, and until his death in 363 father and son reigned together.

After his father's death, Teos invaded the Persian territories of modern Syria and Israel and was beginning to meet with some successes when he lost his throne due the machinations of his own son Tjahepimu. Tjahepimu took advantage of Teos' unpopularity within Egypt by declaring his son - and Teos' grandson - Nectanebo II - king. The Egyptian army rallied around Nectanebo which forced Teos to flee to the court of the king of Persia.

Nectanebo II's reign was dominated by the efforts of the Persian rulers to reconquer Egypt, which they considered a satrapy in revolt. For the first ten years, Nectanebo avoided the Persian reconquest because Artaxerxes III was forced to consolidate his control of the realm. Artaxerxes then attempted an unsuccessful invasion of Egypt in the winter of 351/350 BC; the repercussions of his defeat prompted revolts in Cyprus, Phoenicia, and Cilicia.

Although Nectanebo gave support to these revolts, Artaxerxes would eventually suppress these rebellions and was once again able to invade Egypt in 343 BC. This second invasion proved successful, and Nectanebo was forced to withdraw from his defenses in the Nile Delta to Memphis, where he saw that his cause was lost. He thereupon fled south to Nubia, where he is assumed to found refuge at the court of King Nastesen of Napata. Nectanebo, however, may have managed to maintain some form of independent rule in the south of Egypt for 2 more years since a document from Edfu is dated to his eighteenth year.

Although a shadowy rebel Khababash proclaimed himself king (338 - 336 BC), Nectanebo has been considered the last native pharaoh of Egypt, and his flight marked the end of Egypt as an independent entity.


The 30th Dynasty contains the last of the Egyptian-born Pharaohs.

Nectanebo I was the first ruler of the Thirtieth Dynasty and was a general from Sebennytus. He is thought to have been related to the family of Nepherites I. He imposed heavy taxes on the people of Egypt in order to conquer Syria from Persia. In the spring of 373 BC, the Persian army moved in to attack Egypt. They got as far as the Mendesian mouth of the Nile. Two of the commanders of the Persian forces could not agree on their strategy. As the time passed, the Nile rose and flooded the Delta area. The Persians abandoned their efforts and left. The Egyptians had successfully turned back the Persians, with a little help from the Nile, and peace was established. Nectanebo restored and built many monuments throughout Egypt.380-362

Teos was the second ruler of the Thirtieth Dynasty and was the son of his predecessor, Nectanebo I. After his father had died, Teos took over the throne and planned an attack on the Persians. He had the help of mercenaries from Greece, but his own generals disagreed with his leadership and the entire event was a fiasco. He was deserted by both the Greeks and the Egyptians. He fled to Persia by way of Arabia and Artaxerxes II, the ruler of Persia, gave him refuge. He lived in Persia until his death. 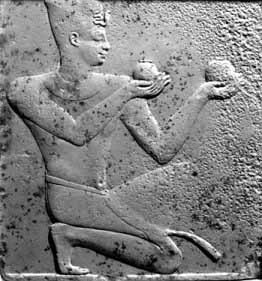 Nectanebo II was the third and final ruler of the Thirtieth Dynasty. He became king after Teos' campaign into Persia which was a disaster. Teos had fled to Persia and Nectanebo returned to Egypt as Pharaoh. Nectanebo ruled for eighteen years and built many monuments in Egypt.

Much of Nectanebo's reign was peaceful and there was a final flowering of the local Egyptian arts. Statues were erected at Abydos and Bubastis, a granite temple was built at Horbeit in the Delta and bas-reliefs were carved at Karnak with a purity of style comparable to that of the Saite renaissance.

After the disaster with the Persians, Nectanebo II risked no further expeditions against the Syrians or the Palestinians. However, the Persians did attempt to subdue Egypt and this time succeeded. Cyprus and Phoenicia were also fighting against the Persians and were assisted with some troops from Nectanebo II.

Artaxerxes III (Persian) destroyed these troops and moved against Egypt. This time the Nile flooding had already passed and the Persian attack was made much more wisely that the last attack (Nectanebo I). The attack was made at three different points at the same time. Nectanebo II retreated to Memphis where he thought he would make a stand against the Persians. But, as city after city fell, he gathered up as much of his possessions as he could and fled to Ethiopia.

Artaxerxes razed fortifications, desecrated temples and plundered the treasury. He appointed Pherendares as satrap of Egypt and returned to Babylon laden with treasures.