The sixteenth dynasty of ancient Egypt (notated Dynasty XVI) was a dynasty of pharaohs that ruled in Upper Egypt for 50 years during the Second Intermediate Period (c. 1650-1550 BCE), a period that saw the division of Upper and Lower Egypt between the pharaohs at Thebes and the Hyksos kings at Avaris.

Of the two chief versions of Mantheo King Lists, Dynasty XVI is described by the more reliable Africanus (supported by Syncellus) as "hyksos kings", but by Eusebius as Theban.

The continuing war against Dynasty XV dominated the short-lived Dynasty XVI. The armies of Dynasty XV, winning town after town from their southern enemies, continually encroached on Dynasty XVI, eventually threatening and then conquering Thebes itself. Famine, which had plagued Upper Egypt during late Dynasty XIII and Dynasty XIV, also blighted Dynasty XVI, most evidently in the reign of Neferhotep III.

From Ryholt's reconstruction of the Turin canon, 15 kings of Dynasty XVI can now be named, five of whom appear in contemporary sources. While most likely ruled from Thebes itself, some may have been local rulers from other important Upper Egyptian towns, including Abydos, El Kab and Edfu. By the reign of Nebiriau I, the Dynasty XVI realm extended at least as far north as Hu. Not listed in the Turin canon (after Ryholt) is Wepwawetemsaf, who left a stele at Abydos and was likely a more local king.

Ryholt gives the list of Dynasty XVI kings as shown in the table below. Others, such as Helck, Vandersleyen, Bennett and others combine some of these rulers with the Seventeenth dynasty of Egypt. The estimated dates come from Bennett's publication. 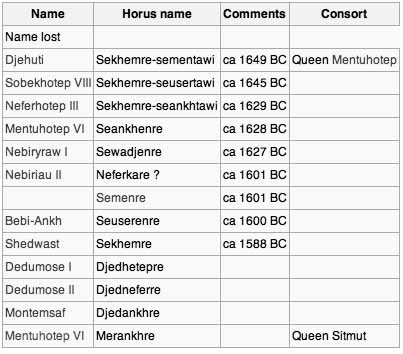 Djehuti, Djehuty or Thuty was a pharaoh of Ancient Egypt dating to the Second Intermediate period. Djehuti's prenomen, Sekhemre Sementawy, means "The Power of Re who Establishes the Two Lands." It is thought that he was succeeded by Sobekhotep VIII. Djehuti may have been a part of the Theban 16th dynasty based in Upper Egypt. He reigned for ca. 3 years after around 1650 BC according to Kim Ryholt.

The Turin King List is open to interpretation. There are several kings with the name of Sekhemre and the damage to the original document does not preserve the complete name. As a result Djehuty, named Sekhemre Sementawy, may correspond to names corresponding to Kings from the 13th, 15th, 16th and even 17th dynasties. His wife Mentuhotep's burial was found intact and a (now lost) coffin was identified as hers. It contained one of the earliest monuments of the Second Intermediate Period which was inscribed with texts from the Book of the Dead. A block from Deir el-Ballas mentions the king and an inscription from Edfu show the king with the red crown of Upper Egypt.

Sekhemre Susertawi Sobekhotep VIII was an Egyptian king during the 16th or 17th Theban dynasty of Egypt and is believed to be the successor of Djehuti according to Kim Ryholt. He reigned over Upper Egypt during the time of the Hyksos conquest of Memphis and Lower Egypt. A stela found at Karnak dated to the epagomenal or final 5 days of his Fourth regnal year describes his attempts to preserve the temple here from damage by a massive Nile flood. He enjoyed a reign of 16 years according to the Turin Canon and was succeeded by Neferhotep III.

Sekhemre Sankhtawy Neferhotep III was the third or fourth ruler of the Theban 16th Dynasty after Djehuti and Sobekhotep VIII according to Ryholt. He is assigned a reign of 1 year in the Turin Canon and is known primarily by a single document from Thebes. Von Beckerath dates Neferhotep III to the end of the Thirteenth dynasty of Egypt.

In the stela from Thebes, Neferhotep III repeatedly calls Thebes "my city" and praises himself as "The guide of victorious Thebes." The stela is thought to be the first depiction of the Khepresh crown. Neferhotep is said to be "Adorned with the Khepresh, the living image of Re, lord of terror". After his short reign, he was succeeded by king Mentuhotep VI.

Sankhenre Mentuhotep VI was a Pharaoh of Egypt of the 16th or 17th Theban dynasty based in Upper Egypt during the Second Intermediate Period. He was the successor of Neferhotep III and is assigned a reign of 1 year in the Turin Canon. Mentuhotep VI is attested by a single stela from Thebes. In this document, Mentuhotep VI emphatically states: "I am the king within Thebes, this is my city." His predecessor was Sekhemre Sankhtawy Neferhotep III. Mentuhotep VI himself was succeeded by Nebiryraw I who ruled Upper Egypt for more than 25 years.

Sewadjenre Nebiryraw or Nebiryerawet I was a pharaoh of Egypt of the 16th or 17th Theban dynasty based in Upper Egypt during the Second intermediate period. Nebiryraw I reigned for 26 years according to the Turin Canon and was succeeded by Nebiriau II who may have been his son.

All the published seals of Nebiriau I were made of clay or frit rather than steatite which implies there were no mining expeditions dispatched to the Eastern Desert region of Egypt during his reign. Two seals of this king were found at Lisht deep in Hyksos territory which might imply diplomatic contact between the Theban dynasty and the Hyksos during Nebiriau I's reign, although this is uncertain. A small stela showing the king in front of Maat is part of the Egyptian collection located in Bonn. His prenomen "Sewadjenre" means "The One whom Re causes to flourish.

The Cairo Juridical Stela dates to Year 1 of his reign when the father of Sobeknakht II - Sobeknakht I - purchased the office of Governorate of Elkab from Kebsi. Kebsi was the son of Governor (later Vizier) Aymeru and grandson of Aya who was appointed Vizier in Year 1 of King Merhotepre Ini of the 13th Dynasty. This suggests that the owner of the richly decorated tomb T10 at El-Kab was Sobeknakht II. Accordingly, if Sobeknakht I first purchased his office in Year 1 of Nebiriau I's reign - who is given a reign of 26 years by the Turin Canon - his son would have been king during the final years of Nebiryraw I, Nebiryraw II and probably Seuserenre Bebiankh (who is given 12 years by the Turin Canon).

Nebiriau II or Nebiryerawet was a king of the 16th or 17th Theban dynasty who ruled Upper Egypt during the Second Intermediate Period of Ancient Egypt. He is commonly assumed by some Egyptologists to be the son of Sewadjenre Nebiriau I, his predecessor given the rarity of the name Nebiriau in Egyptian historical sources.

Unlike his presumed father who ruled Upper Egypt for 26 years, he was an obscure king who is completely unattested by contemporary archaeological sources. Nebiriau II was succeeded by an equally obscure king named Semenre who is attested by a single axe - inscribed his prenomen - and then by Seuserenre Bebiankh who is given 12 years in the Turin Canon.

Seuserenre Bebiankh was a native Ancient Egyptian king of the 16th Theban dynasty during the Second Intermediate Period and the successor of king Semenre. He is assigned a reign of 12 years in the Turin Canon. Seuserenre is principally known by a stela found at Gebel Zeit that attests to mining activity conducted in this area by the Red Sea during his reign and preserves his royal nomen Bebiankh. He is also known to have an extension to the Temple of Medamud. He was succeeded by a poorly known king named Sekhemre Shedwast.

The German Egyptologist Jurgen von Beckerath has attributed an anonymous Year 11 Sothic inscription from Gebel Tjauti Rock inscription No.11 - which has been dated to the period around 1593-1590 BC deep within the Second Intermediate Period - to king Seuserenre. If correct, this would place Seuserenre's reign in the period from 1603 or 1600 BC to 1591 or 1588 BC. His prenomen, Seuserenre, means "The One Whom Re Causes to be Strong."

Sekhemre Shedwast (Sekhemreshedwaset) was a native Ancient Egyptian king of the 16th Theban dynasty during the Second Intermediate Period and the successor of king Bebiankh. It has been suggested, but not universally accepted, that Sekhemre Shedwast may be identical to Sekhemre-shedtawi Sobekemsaf I. If so, he may have been married to Queen Nubkhaes II and they may have had a son named Sekhemre-Wepmaat Intef.

Djedhetepre Dudimose I was an Egyptian king of the Second Intermediate Period. He is mentioned on stela found at Edfu belonging to a king's son and commander Khonsemwaset. It is not known whether the latter was the son of the king, as king's son was a title not only given to the actual children of a king. There is another king with the name Dedumose II. It is possible that he was the son of Dedumose I. There are also some objects naming a king Dedumose, without providing a second name. K. S. B. Ryholt: The Political Situation in Egypt during the Second Intermediate Period, c. 1800 - 1550 BC.

Precise dates for Dudimose are unknown, but according to the commonly-accepted Egyptian chronology his reign probably ended around 1690 BC.

David Rohl's 1995 A Test of Time attempted to correct Egyptian history by shortening the Third Intermediate Period of Egypt by almost 300 years. As a by-result the synchronisms with the biblical narrative have changed, making the 13th Dynasty pharaoh Djedneferre Dudimose (Dedumesu, Tutimaos, Tutimaios) the pharaoh of the Exodus. Rohl's theory, however, has failed to find support among most scholars in his field.

Dedumose II was a native Ancient Egyptian king of the 16th Theban dynasty during the Second Intermediate Period. His Horus name was Djedneferre. Williams and other place Dedumose as the last king of Egypt's 13th Dynasty. Precise dates for Dudimose are unknown, but according to the commonly-accepted Egyptian chronology his reign probably ended around 1690 BC.

Attempts have been made to link Dedumose to the story of Tutimaios, his conflict with the Hyksos, and his fall as told by the ancient Egyptian chronicler Manetho, whose history survives in fragments in Josephus, Africanus, and Eusebius. But the link between Dedumose and Tutimaios is tenuous at best and not supported by linguistic (Tutimaios is more likely derived from Djehutymose) or historical facts.

There have been attempts by the revisionist historians Immanuel Velikovsky and David Rohl to identify him as the Pharaoh of the Exodus, much earlier than the mainstream candidates, but this is rejected by most historians.

Djedneferre Dedumose II is known from a stela originally from Gebelein which is now in the Cairo Museum (CG 20533). On the stela Dedumose claims to have been raised for kingship. This may indicate he is a son of Dedumose I, although the statement may also merely be a form of propaganda. A stela belonging to Harsekher from Edfu states that the King's Son Harsekher, son of the King's Son Sobekhotep is related to a king Dedumose.