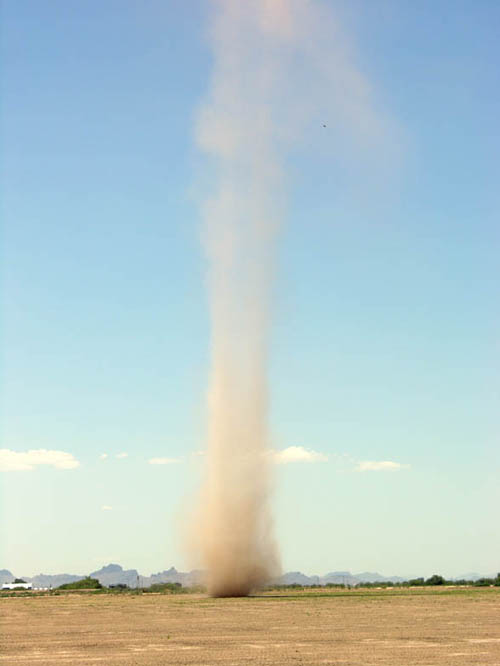 A dust devil is a strong, well-formed, and relatively long-lived whirlwind, ranging from small (half a metre wide and a few metres tall) to large (more than 10 metres wide and more than 1000 metres tall). The primary vertical motion is upward. Dust devils are usually harmless, but can on rare occasions grow large enough to pose a threat to both people and property.

They are comparable to tornadoes in that both are a weather phenomenon of a vertically oriented rotating column of air. Most tornadoes are associated with a larger parent circulation, the mesocyclone on the back of a supercell thunderstorm. Dust devils form as a swirling updraft under sunny conditions during fair weather, rarely coming close to the intensity of a tornado.

Dust devils form when hot air near the surface rises quickly through a small pocket of cooler, low- pressure air above it. If conditions are just right, the air may begin to rotate. As the air rapidly rises, the column of hot air is stretched vertically, causing intensification of the spinning effect by conservation of angular momentum.

The secondary flow in the dust devil causes other hot air to speed horizontally inward to the bottom of the newly forming vortex. As more hot air rushes in toward the developing vortex to replace the air that is rising, the spinning effect becomes further intensified and self-sustaining. A dust devil, fully formed, is a funnel-like chimney through which hot air moves, both upwards and in a circle. As the hot air rises, it cools, loses its buoyancy and eventually ceases to rise. As it rises, it displaces air which descends outside the core of the vortex. This cool air returning acts as a balance against the spinning hot-air outer wall and keeps the system stable.

The spinning effect, along with surface friction, usually will produce a forward momentum. The dust devil is able to sustain itself longer by moving over nearby sources of hot surface air.

As available extreme hot air near the surface is channeled up the dust devil, eventually surrounding cooler air will be sucked in. Once this occurs, the effect is dramatic, and the dust devil dissipates in seconds. Usually this occurs when the dust devil is not moving fast enough (depletion) or begins to enter a terrain where the surface temperatures are cooler, causing unbalance.

Flat barren terrain, desert or tarmac: Flat conditions increase the likelihood of the hot-air "fuel" being a near constant. Dusty or sandy conditions will cause particles to become caught up in the vortex, making the dust devil easily visible.

Clear skies or lightly cloudy conditions: The surface needs to absorb significant amounts of solar energy to heat the air near the surface and create ideal dust devil conditions.

Light or no wind and cool atmospheric temperature: The underlying factor for sustainability of a dust devil is the extreme difference in temperature between the near-surface air and the atmosphere. Windy conditions will destabilize the spinning effect (like a Tornado) of a dust devil.

On Earth, most dust devils are very small and weak, often less than 3 feet (0.9 m) in diameter with maximum winds averaging about 45 miles per hour (70 km/h), and they often dissipate less than a minute after forming. On rare occasions, a dust devil can grow very large and intense, sometimes reaching a diameter of up to 300 feet (90 m) with winds in excess of 60 mph (100 km/h) and can last for upwards of 20 minutes before dissipating.[5]

Dust devils typically do not cause injuries, but rare, severe dust devils have caused damage and even deaths in the past. One such dust devil struck the Coconino County Fairgrounds in Flagstaff, Arizona, on September 14, 2000. Extensive damage occurred to several temporary tents, stands and booths, as well as some permanent fairgrounds structures. In addition, several injuries were reported, but there were no fatalities. Based on the degree of damage left behind, it is estimated that the dust devil produced winds as high as 75 mph (120 km/h), which is equivalent to an EF0 tornado.

On May 19, 2003, a dust devil lifted the roof off a two-story building in Lebanon, Maine, causing it to collapse and kill a man inside.

In 2010, three children in an inflatable jump house were picked up by a dust devil and were carried over 10-foot (3 m) high, over a fence and landed in a backyard three houses away, in east El Paso, Texas. Dust Devils   Wikipedia 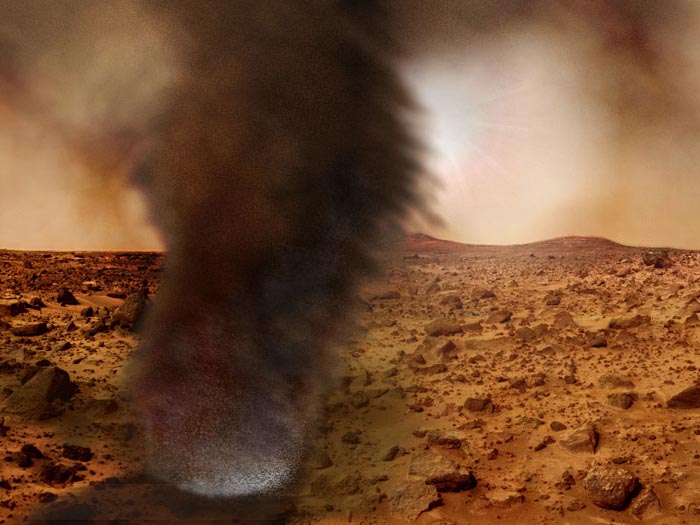 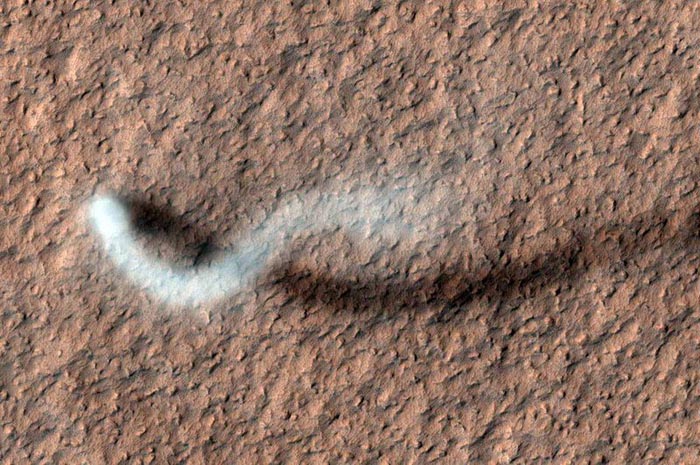 Dust devils also occur on Mars and were first photographed by the Viking orbiters in the 1970s. In 1997, the Mars Pathfinder lander detected a dust devil passing over it. In the image shown here, photographed by the Mars Global Surveyor, the long dark streak is formed by a moving swirling column of Martian atmosphere. The dust devil itself (the black spot) is climbing the crater wall. The streaks on the right are sand dunes on the crater floor.

Martian dust devils can be up to fifty times as wide and ten times as high as terrestrial dust devils, and large ones may pose a threat to terrestrial technology sent to Mars.

Mission members monitoring the Spirit rover on Mars reported on March 12, 2005, that a lucky encounter with a dust devil had cleaned the solar panels of that robot. Power levels dramatically increased and daily science work was anticipated to be expanded. A similar phenomenon (solar panels mysteriously cleaned of accumulated dust) had previously been observed with the Opportunity rover, and dust devils had also been suspected as the cause.


Delving into Dust Devils On Earth and Mars Space.com - October 3, 2005