Dolphins in the News

15-foot-long skeleton of extinct dolphin suggests parallel evolution among whales   PhysOrg - July 9, 2020
Report offers a detailed description of the first nearly complete skeleton of an extinct large dolphin, discovered in what is now South Carolina. The 15-foot-long dolphin (Ankylorhiza tiedemani comb. n.) lived during the Oligocene - about 25 million years ago - and was previously known only from a partial rostrum (snout) fossil. The researchers say that multiple lines of evidence - from the skull anatomy and teeth, to the flipper and vertebral column - show that this large dolphin (a toothed whale in the group Odontoceti) was a top predator in the community in which it lived. Many features of the dolphin's postcranial skeleton also imply that modern baleen whales and modern toothed whales must have evolved similar features independently, driven by parallel evolution in the very similar aquatic habitats in which they lived.


Dolphin which learnt 'to walk on its tail' in captivity teaches nine others the trick in the wild (and her imitation skills could save the species from climate change)   Daily Mail - August 28, 2018
Dolphins can learn from each other to walk on their tail Đ and this intelligence could help save the species from climate change, a new study found. Scientists say a dolphin who learned the complex trick in captivity has taught it to nine of her friends and family since she was released into the wild. It marks the only known example of a mammal teaching human tricks to its peers in the wild without any help from a human trainer. The skill allows dolphins to adapt new behavior faster than they would through natural selection, potentially giving them the edge over rapid changes to their environment caused by global warming.


Ancient 'Strange-Face' Dolphin Used Its Snout to Vacuum Up Food   Live Science - August 23, 2017
A now-extinct dwarf dolphin whose name means "weaponless-snouted strange face" may have once used its toothless mouth to suck up fish and squid, a new study finds.The finding suggests that modern dolphins and whales developed bizarre forms of feeding within only a few million years after they evolved, the researchers said. Divers hunting for shark teeth found the skull fossil of a dolphin at the bottom of the Wando River near Charleston, South Carolina. Based on the layers of sandy limestone in which the bone was discovered, the scientists determined that the fossil is about 28 million to 30 million years old.

Dolphins may have a spoken language, new research suggests   CNN - September 13, 2016
A conversation between dolphins may have been recorded by scientists for the first time, a Russian researcher claims. Two adult Black Sea bottlenose dolphins, named Yasha and Yana, didn't interrupt each other during an interaction taped by scientists and may have formed words and sentences with a series of pulses, Vyacheslav Ryabov says in a new paper. Essentially, this exchange resembles a conversation between two people. Further research is needed.


Are dolphins psychic? Their complex social intelligence suggests the animals may share a 'collective consciousness'   Daily Mail - September 17, 2015
Dolphins have long been considered to be intelligent, but scientists are only now starting to unravel the true complexity of their brains and behavior. In many ways they behave like humans - they form social groups and cliques, they have previously been taught to recognize 'alphabets' of symbols and many have even attempted to befriend us.Now, a book discusses how this high level of intelligence could stem from the mammals having what's known as a collective consciousness, with the author claiming they may know something that we don't.


Dolphins are attracted to magnets   PhysOrg - September 29, 2014
Dolphins are indeed sensitive to magnetic stimuli, as they behave differently when swimming near magnetized objects. Magnetoreception implies the ability to perceive a magnetic field. It is supposed to play an important role in how some land and aquatic species orientate and navigate themselves. Some observations of the migration routes of free-ranging cetaceans, such as whales, dolphins and porpoises, and their stranding sites suggested that they may also be sensitive to geomagnetic fields.


Brazil dolphin is first new river species since 1918   BBC - January 22, 2014
Scientists in Brazil have discovered the first new river dolphin species since the end of World War One. Named after the Araguaia river where it was found, the species is only the fifth known of its kind in the world. Researchers say it separated from other South American river species more than two million years ago. There are believed to be about 1,000 of the creatures living in the Araguaia river basin. River dolphins are among the world's rarest creatures.


Researchers reveal new New Zealand fossil dolphin   PhysOrg - January 22, 2014
A newly recognized fossil dolphin from New Zealand, dubbed Papahu taitapu, is the first of its kind ever found and may be a close relation to the ancestors of modern dolphins and toothed whales. Papahu lived 19Đ22 million years ago, and is one of the few dolphins to be reported globally dating to the start of the Miocene epoch. Judging from the size of its skull, Papahu was about two metres long, roughly the size of a common dolphin.


Scientists gain new insights into dolphin's evolutionary history and conversation   PhysOrg - October 29, 2013
Researchers found there were many factors related with the aquatic adaptations of cetaceans, such as positively selected genes (PSGs), and some functional changes. One of the noticeable findings is that PSGs in the baiji lineage were also involved in DNA repair and response to DNA damage stimulus, which have not been reported in previous studies of mammals or dolphin. Nicknamed "Goddess of the Yangtze", the baiji was regarded as the goddess of protection by local fishermen and boatmen in China. Unfortunately, this species has suffered huge losses in recent decades largely due to the extreme pressures brought by human's activities. The baiji has become one of the most famous species in aquatic conservation. There have been many great efforts made to conserve the baiji, but most of them failed.


Dolphins have 'longest social memory' among non-humans   BBC - August 7, 2013
Forget about elephants - scientists say that dolphins have the longest memories yet found in a non-human species. Researchers in the US say that even after 20 years of separation, dolphins could recall the whistles of former companions. The authors believe that these long-term memories are a product of the complex social connections that dolphins have evolved. In the study, the scientists used information on the relationships between 56 captive bottlenose dolphins that have been moved for breeding purposes between six different zoos and aquariums in the US and Bermuda. The records, dating back decades, showed which of the dolphins had been housed together. 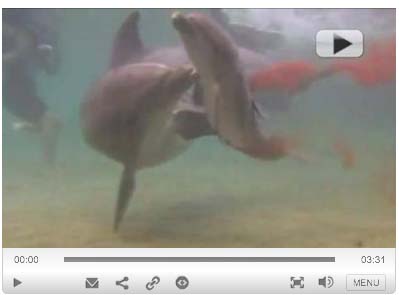 A female dolphin was born at a Hawaiian resort last week and amazing underwater video footage shows the baby's birth and first swim with her mom. The 12-year-old dolphin mom, Keo, gave birth after about an hour of labor in a lagoon at the Dolphin Quest marine park, part of the Hilton Waikoloa Village. The video shows Keo's calf slowly emerging tail-first. Once she's born, the baby begins swimming a little erratically but soon glides easily alongside her mom. Dolphin Quest officials said the calf started nursing within four hours of birth.


Dolphins at Sea Greet Each Other   Discovery - February 29, 2012
When groups of dolphins meet up in the open sea they thoughtfully introduce themselves. Bottlenose dolphins swap signature whistles with each other when they meet in the open sea, a new study reports, suggesting that these marine mammals engage in something akin to a human conversation. Earlier research found that signature whistles are unique for each dolphin, with the marine mammals essentially naming themselves and communicating other basic information.


Dolphin whistles are unfit for porpoise   PhysOrg - February 29, 2012
Bottlenose dolphins have whistles which they use to exclusively greet other members of their species, marine biologists in Scotland reported. Using hydrophones, the researchers made recordings of dolphins swimming in St. Andrews Bay, off the northeastern coast of Scotland, in the summers of 2003 and 2004. When groups of dolphins met up, they swapped whistles that outwardly sounded the same.


Dolphin Studies Could Reveal Secrets of Extraterrestrial Intelligence   Live Science - September 6, 2011
How do we define intelligence? SETI, the Search for Extraterrestrial Intelligence, clearly equates intelligence with technology (or, more precisely, the building of radio or laser beacons). Some, such as the science fiction writer Isaac Asimov, suggested that intelligence wasn't just the acquisition of technology, but the ability to develop and improve it, integrating it into our society. By that definition, a dolphin, lacking limbs to create and manipulate complex tools, cannot possibly be described as intelligent. It's easy to see why such definitions prove popular; we are clearly the smartest creatures on the planet, and the only species with technology. It may be human hubris, or some kind of anthropocentric bias that we find difficult to escape from, but our adherence to this definition narrows the phase space in which we're willing to search for intelligent life.


Dolphin hunts with electric sense   BBC - July 27, 2011
A South American dolphin is the first "true mammal" to sense prey by their electric fields, scientists suggest. The researchers first showed that structures on the animal's head were probably sensory organs, then found it could detect electric fields in water.


Dolphins' 'Sixth Sense' Helps Them Feel Electric Fields   Live Science - July 27, 2011
The common Guiana dolphin has just divulged its sixth sense: the ability to sense electric fields. It is the first placental mammal known to pull off this trick, new research finds. The dolphin, which bears live young like other placental mammals, most likely uses its sixth sense to find prey in the murky coastal waters it inhabits.


Miraculous! Dolphin Healing Powers May Help Humans   Live Science - July 21, 2011
You have an animal that has evolved in the ocean without hands or legs, which swims faster than we can, has intelligence that perhaps equals our social and emotional complexity, and its healing is almost alien compared to what we are capable of. Several remarkable abilities work together for the seemingly miraculous healing in dolphins. First, even with a large gaping wound in their side, dolphins don't bleed to death.


Successful mothers get help from their friends: Dolphin study   PhysOrg - November 2, 2010
Female dolphins who have help from their female friends are far more successful as mothers than those without such help, according to a landmark new study.


'Balloon head' dolphin discovered   BBC - November 2, 2010
A new type of dolphin with a short, spoon-shaped nose and high, bulbous forehead has been identified from a fossil found in the North Sea. The Platalearostrum hoekmani was named after Albert Hoekman, the Dutch fisherman who in 2008 trawled up a bone from the creature's skull.