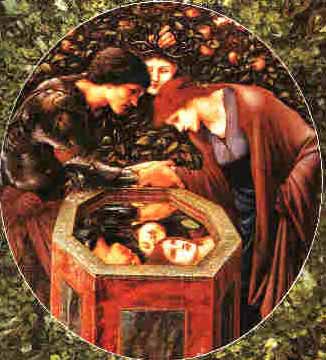 Divination is the attempt of ascertaining information by interpretation of omens or an alleged supernatural agency. If a distinction is to be made with fortune-telling, divination has a formal or ritual and often social character, usually in a religious context; while fortune-telling is a more everyday practice for personal purposes.

Divination is often dismissed by skeptics, including the scientific community, as being mere superstition: in the 2nd century, Lucian devoted a witty essay to the career of a charlatan, Alexander the false prophet, trained by "one of those who advertise enchantments, miraculous incantations, charms for your love-affairs, visitations for your enemies, disclosures of buried treasure, and successions to estates", though most Romans believed in dreams and charms. However, advocates say there is plenty of anecdotal evidence for the efficacy of divination. Divination is a universal cultural phenomenon which anthropologists have observed as being present in many religions and cultures in all ages up to the present day.

Scientific research and methods have made it possible to predict future events with some success, e.g., eclipses, weather forecasts and volcanic eruptions. However, this is not divination. Divination practices are usually rooted in religious or other belief systems that assume the influence of some supernatural force or fate, whereas scientific predictions are made from an essentially mechanical, impersonal world-view and rely on empirical laws of nature. Thus, as an operational definition, divination would be all methods of prognostication that have not been shown to be effective using scientific research.

The scientific method relies on repeated and systematic observations and experiments, which lead to hypotheses that are tested and possibly falsified; in this way a theory is built, which is a model that describes our understanding of the phenomena, and often allows predictions for similar future events. Divination practices are not the outcome of the application of the scientific method, and therefore are often considered superstition or at best pseudo-science. There is no obvious, unique, consistent, or compelling way that a divination practice can be derived from its underlying belief system; indeed one can practice divination without reference to a particular belief system.

One does not need to know how or why a practice "works", as long as one can verify that it works: the latter can be subject to scientific inquiry. However diviners do not systematically assess their results or try to falsify their hypotheses. Indeed diviners are discouraged to repeat queries. The taboo is that repetition may be an attempt to divine a more favorable answer, or that repetition adversely agitates the method or the operants. Without repitition of the divination, it is much harder to design experiments that will have meaningful statistically significant results that could falsify a hypothesis about the divination method.

Beyond mere explanations for anecdotal evidence, some theories have been proposed of how some forms of divination might result in meaningful messages. One theory is that the divination process allows messages from the subconscious mind to emerge into the conscious world. For example, using the I Ching oracle, a person with a very good knowledge of the 64 chapters of the I Ching might subconsciously direct the division of the yarrow stalks to obtain a relevant oracle. After an I Ching hexagram has been found, some interpretation is needed to obtain an answer to the question posed, and again, this allows the subconscious to influence the outcome. This theory presupposes that the subconscious mind has a relevant message to deliver, which in any particular case may or may not be true.

Sometimes random decisions are recognized by modern science as effective ways to address a problem. Mathematical problems may be addressed by Monte Carlo algorithms in which pseudo-random numbers are used to test a function. In game theory, choices must be made randomly to prevent opponents from devising an effective counter strategy. A similar role might exist for the I Ching, which is sometimes described as an "invention machine", in which any random combination of hexagrams potentially leads to a new and different idea. Perhaps divination schemes may be seen as efforts to divide conceptual space into segments, and randomly directing attention to any segment is potentially productive. Divination